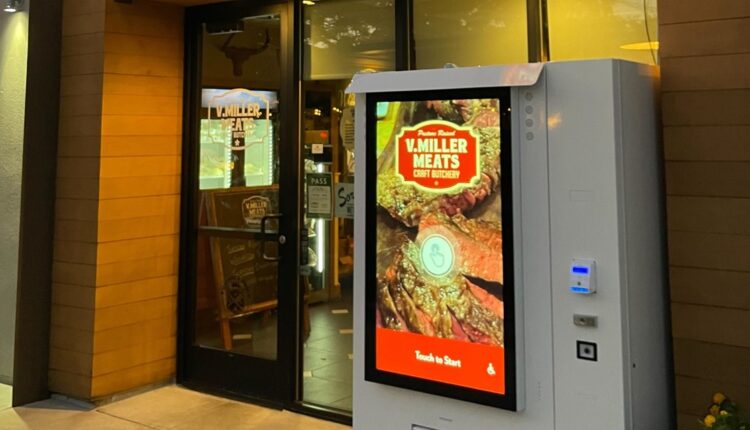 Pork chops, ribeye steaks, ground beef and sausages from a local butcher available at 3 pm, 3 am or any other time or day you can think of.

SACRAMENTO, Calif. — Sausages, pork chops and steaks are about to be a 24/7 product in East Sacramento. It’s all part of a quirky idea from a local butcher that’s becoming a reality.

Eric Veldman Miller, owner of V. Miller Meats, is opening a vending machine just for meat products that come from his shop. The new machine, which goes online Thursday, will be stocked with bacon, house-made sausages, ribeye steaks, pork chops and ground beef, a sample of what is most popular at his shop.

However, the new technology is more than just for the novelty of getting a raw ribeye at 3 am He’s doing it for his customers who returned to work after the pandemic and don’t have the time to head to his shop.

“We gained a whole bunch of customers (during the pandemic), but then last fall when a lot of people started going back to work, the hours that we keep at the butcher shop – 10 to six – didn’t necessarily fit with their lifestyle or their schedule anymore,” Miller said, noting that he couldn’t easily adjust his businesses hours.

He mused the idea for a meat vending machine months ago, but he said the machines just weren’t built to for meat. It didn’t gain the right traction until Josh Applestone, of Applestone Solutions, built the technology to make it a reality. Miller said Applestone had learned the ups and downs of these machines through his experience with them in New York.

“Anything you could think of, these guys were already on top of it because they’d had that history of using machines that were not built for it, so the solutions were right there,” Miller said.

One of the issues that needed a solution was the scathing Sacramento heat. Applestone had actually visited Miller in town and was greeted with triple-digit temperatures. It was another detail they kept in mind when they refined the machine.

Even the touchscreen was built with scathing Sacramento temperatures in mind, Miller said the screen’s thickness was doubled to keep it safe from the heat and potentially anything else that could do it harm.

“Just as a side benefit, like if anybody… decided to hit it with a rock or a hammer, it’s not gonna happen, so the security benefits kind of amplified there as well,” Miller said.

Despite the new tech and 24/7 service, prices will stay the same whether you’re buying in the store or through the machine.

Fort Bidwell: Loneliest place in California to get a good steak!