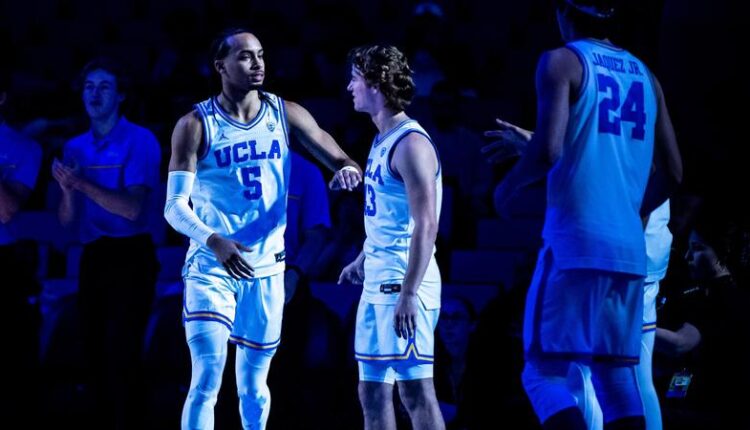 COME ON ANGELS – No. 8-ranked UCLA will open the season against Sacramento State on Monday evening in Pauley Pavilion presented by Wescom. The Bruins’ game is scheduled for 8:30 pm (PT). The UCLA women’s basketball team will face Cal Poly at 5:30 pm that night, preceding the season-opening men’s basketball game.

UCLA’s game will be televised by the Pac-12 Network, with Ted Robinson and Bill Walton on the call. Fans can listen to UCLA’s game on AM 1150 radio in the Los Angeles area. Veteran radio broadcasters Josh Lewin and Tracy Murray will have the call, courtside in Pauley Pavilion.

The UCLA men’s basketball game against Sacramento State will begin at 8:30 pm (PT). The evening will mark a celebration of UCLA basketball, beginning with the women’s basketball game against Cal Poly at 5:30 pm (PT). One ticket will grant fans admission to both games on Monday evening. In honor of the 10-year “reopening” of Pauley Pavilion, commemorative tickets and UCLA basketball lanyards will be available to fans (while supplies last).

Tickets for the Bruins’ game on Monday against Sacramento State start at $12 and are valid for the men’s and women’s basketball contests. The first 1,000 Den Pass holders (beginning at the women’s game) will receive a “UCLA Basketball” bucket hat in honor of the doubleheader. In addition, all UCLA faculty and staff members can receive one complimentary ticket to both games by showing a valid ID at the Pauley Pavilion Box Office on game-day (limit of four, per person). UCLA’s season ticket packages are still on sale (for $219), getting fans access to the team’s remaining 17 regular-season home games. To reserve your seats, click here or call (310) UCLA-WIN.

– The Bruins have returned five of their main 11 contributors from last season’s squad. UCLA went 27-8 overall last year, advancing to the NCAA Tournament’s Sweet 16. Veteran players back this season include seniors Tyger Campbell, Jaime Jaquez Jr., Kenneth Nwuba and David Singleton and junior Jaylen Clark. Each of those five student-athletes played in at least 20 contests in 2021-22. All five players competed in the 2021 NCAA Tournament (advancing from the “First Four” to the Final Four). UCLA has also returned a pair of redshirt freshmen in Mac Etienne and Will McClendon, who both missed last season with knee injuries (torn ACL). Etienne joined the team in Dec. 2020 and played in 13 games in 2020-21.

– UCLA has added six freshmen to the roster this season – guards Dylan Andrews, Amari Bailey, Abramo Canka and Jack Seidler and forwards Adem Bona and Evan Manjikian. Bailey (6-foot-5 guard) and Bona (6-foot-10 forward) were both honored as McDonald’s All-America selections in the spring of 2022. Bailey was recently listed as a preseason honorable mention All-Pac-12 Conference selection (along with junior Jaylen Clark). Andrews (6-foot-2 guard) spent his first three years of high school at nearby Windward School (Los Angeles) before excellent as a senior at Compass Prep in Arizona. Bona averaged 15.5 points and 10.5 rebounds per game last season as a senior at Prolific Prep (Napa, Calif.).

– The Bruins open their regular-season schedule against Sacramento State on Monday, Nov. 7. UCLA’s first three games (all at home) will take place in an eight-day span, with contests lined up against Long Beach State (Nov. 11 ) and Norfolk State (Nov. 14). UCLA will travel to Las Vegas for two games in the Continental Tire Main Event (T-Mobile Arena), facing No. 23 Illinois on Friday, Nov. 18, and either No. 5 Baylor or No. 18 Virginia on Sunday, Nov. 20. The Bruins will conclude the month of November with consecutive home games against Pepperdine (Nov. 23) and Bellamine (Nov. 27).

UCLA has gone 2-0 in the all-time series against Sacramento State. The Bruins most recently recorded an 86-50 win over Sacramento State on Nov. 18, 2013. The first meeting in the all-time series took place on Dec. 23, 2005 (UCLA won, 86-56). Over the past three seasons under head coach Mick Cronin, UCLA has gone 2-1 in season-opening contests. Last year, the Bruins cruised past CSU Bakersfield, 95-58, in Pauley Pavilion. Through his previous 19 seasons as a head coach, Mick Cronin has guided his teams to a combined 15-4 record in regular-season opening games.

The 2022-23 school year marks the 104th season in which UCLA has fielded a men’s basketball team (first season was 1919-20). In addition, this is the 57th season in which the Bruins will call Pauley Pavilion their home. The arena opened at the start of the 1965-66 season and UCLA spent the next 46 seasons playing home games in Pauley Pavilion. The arena was closed for an 18-month renovation during the 2011-12 school year, re-opening in Nov. 2012. In all, the Bruins have won a nation-leading 11 NCAA Championships and have advanced to the NCAA Final Four 19 times .

UCLA will play a 31-game regular-season schedule, with seven games against programs that are ranked in the Associated Press’ preseason top 25 poll. UCLA’s schedule includes 17 games at home, 11 games on the road, and three contests at neutral sites (two in Las Vegas, one in New York). The Bruins could play as many as eight games against teams that advanced to last season’s 68-team NCAA Tournament (includes two against Arizona, two versus USC and one game each against Baylor, Illinois, Kentucky and Norfolk State). UCLA will play 14 games before the end of the 2022 calendar year.

Vehicle with false plates seized by police at Stockton Heath

Brown Bear’s Hot Dogs will be staying open in Fresno