Mike Brown and the Kings are fighting for respect from opponents, fans and even refs 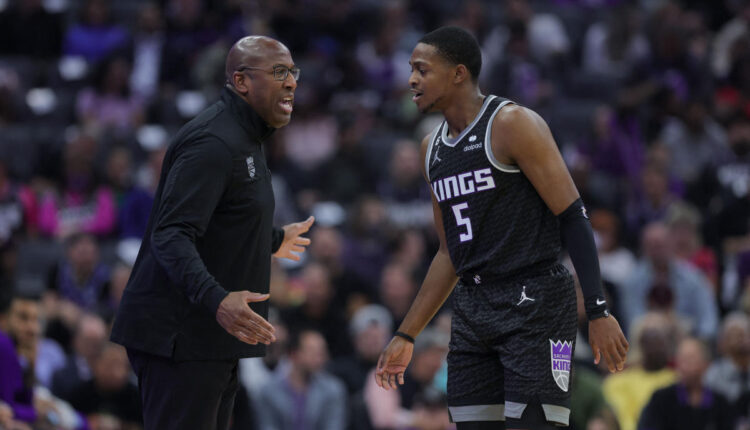 DETROIT — The Sacramento Kings are on a constant quest for respect in their turnaround season, a battle that extends beyond the court and onto the sidelines.

Sometimes, it actually spills onto the court from the sidelines when first-year head coach Mike Brown was ejected a few nights ago in Toronto for angrily contesting a series of calls that went against his team.

The reaction was certainly over the top, and for what it’s worth, the Kings rebounded to defeat the Raptors with Brown watching from the locker room. It cost him $25,000 by way of a fine from the NBA, but it probably gained him plenty of respect and admiration from his players.

“Every time we step on the floor, we have to prove our worth,” Brown said Friday night before the Kings beat the Pistons. “There’s a part of me that doesn’t like that that happened because I’m the first one to tell our guys, ‘Hey, no excuses.'”

Rarely do you hear a coach acknowledge what’s in plain sight. While Brown was racking up rings as a member of Golden State’s coaching staff, the Kings were in the wilderness — a perennial lottery team since 2006 and their last playoff series win was two years before that.

But Brown, in his fourth head-coaching stint, nurtured this team into becoming one of the best offensive units in the league. Brown was long noted as an excellent defensive tactician, leading the Cleveland Cavaliers to the NBA Finals in 2007.

He has the Kings spraying the ball around the floor, leaving teams off-balance reminiscent of his time in Golden State and San Antonio — the latter where he spent time under Gregg Popovich from 2000-03.

There’s an expectation to do more than just compete, and Brown holds them to that standard.

“Even if the refs are having a bad night, we’re having a bad night or, you know, buses broke down. Hey, let’s go get it done,” Brown said. “Because we’re in a good, ‘Let’s believe.’ You know, having that belief no matter what is huge, especially if you want to take that next level.”

It’s a large enough sample size to believe what’s seen is sustainable. Keegan Murray is an impressive rookie, with plenty of room to grow. Malik Monk adds some instant scoring and Harrison Barnes has some championship savvy.

Domantas Sabonis was acquired in a trade for Tyrese Haliburton last season, an exchange that could be described as a win for both teams.

He and De’Aaron Fox have made some magic together, with Fox arguably having his best season — at least his best from the standpoint of driving winning basketball — and both should receive heavy All-Star consideration this season.

Brown going after the officials started when Fox was issued a technical during a free throw; Fox was walking away from the official, an act Brown said officials usually let slide.

“Great, man, just knowing your coach has your back through thick and thin,” Fox said after the Kings used a third-quarter surge to beat the Pistons, 122-113, at Little Caesars Arena to finish a long Eastern road swing at 3-3 “It starts at the top, goes from top to bottom, when trying to build a culture.”

They’re well on their way to surpassing last season’s modest 30-win campaign, more than halfway across that mark so far.

Whether it’s the media boogeyman, opposing fans or even the officials, teams feel it and want the respect and recognition for becoming a credible franchise. Fox feels it — literally.

“I go to the lane and get hit a lot,” Fox said. “So if we don’t have that respect, for us it’s just about going out there and winning every game.”

The Kings have been called “Kangz” for their dysfunctional ways, and even at its height, Shaquille O’Neal derisively called them the “Queens” during the peak of the contentious and entertaining Lakers-Kings rivalry of the early 2000s.

But that quest for respect has turned vocal, with Brown still aware enough to turn the camera inward.

“And just like I’m asking the players to go out there and fight and to compete, and earn the stripes and respect that we feel like we deserve, I gotta fight, compete and do the same right along with them,” he said . “And we’ll go get that respect someday.”

That someday might come sooner than anyone would’ve ever expected.