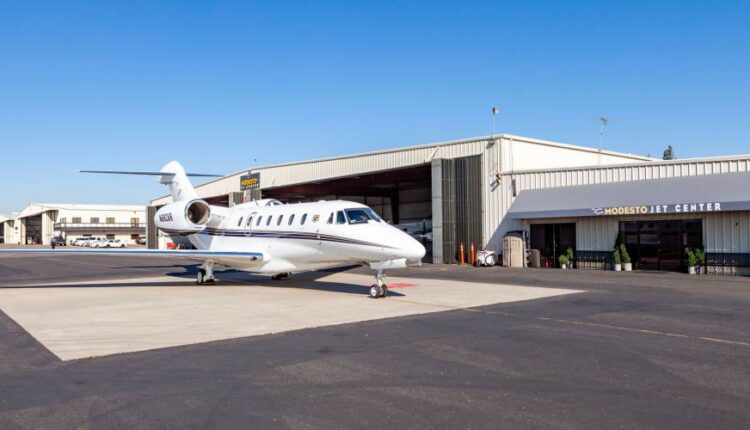 California’s Central Valley is a major agricultural region that accounts for approximately half of the fruits and vegetables consumed in the US, and in its center sits Modesto and its airport Modesto City-County Airport-Harry Sham Field (KMOD). Until 2019, its long-time lone FBO was known as Sky Trek Aviation but its new owners decided to make a change. “I think they felt it was time to do something new and something fresh,” said Otto Wright, general manager of what is now known as the Modesto Jet Center (MJC). “Nobody really knew where Sky Trek Aviation was, so it was kind of a nice way to announce who we are and where we’re at.”

Farming makes up a large portion of the FBO’s clientele, according to Wright. “You’ve got guys who will fly in here with Citation Xs wearing dirty cowboy boots, jeans, and a big hat and that’s kind of normal out here,” he told AIN. Those customers help drive the location’s peak activity periods, which come at the beginning and the end of the growing season. With almonds a big local crop, one would think that they would be a readily available snack in the FBO, but with all the growers passing through MJC, Wright has eschewed offering them to avoid showing favoritism to any particular brand.

The facility offers a 3,000-sq-ft terminal that was built in the early 1990s. It features a large passenger lobby, pilot lounge, 12-seat A/V-equipped conference room, business center, and Wright’s particular pride and joy: a fancy coffee machine. “You’ve got to have good coffee in the FBO business, and people come from all over the place because of our cool coffee maker,” he said jokingly. A major remodel was delayed by the Covid pandemic but is back on track for the third quarter of the year.

Located 70 miles from the San Francisco Bay area, weather has been an issue at times at KMOD. “Modesto was not considered a good alternate because we would always get this fog that would settle in in the wintertime. But in the last number of years, we have not had that same fog, so the climate change has actually been sort of positive for us,” noted Wright.

With more than 80,000 sq ft of hangar space that can accommodate aircraft up to the latest ultra-long-range business jets, the FBO is home to 20 aircraft including MJC’s managed aircraft and charter fleet and a mix of turboprops and light jets. “Before the crash of 2008, Sky Trek used to have Globals and Gulfstreams based here because they didn’t have any room in San Jose,” said Wright. “It’s taken 14 years but some of that business is starting to try and come back and we think it will.”

As proof of that conviction, the company, a sister to charter operator Axis Jet, is awaiting approval to start construction on an $8 million hangar project that will add a pair of 30,000-sq-ft hangars. “The one thing we don’t have here right now is private hangars with their own offices and private bays,” said Wright. “That’s one of the things that a lot of the Bay-area larger operators are looking for.” MJC hopes to break ground in the first quarter of 2023. The facility has four acres of aircraft parking of its own, but it also has access to much of the ramp of the formerly commercially-served airport for larger or military aircraft.

The FBO, which has a staff of 12, is open 24/7. “We have a night guy because it’s not like we get an avalanche of activity that happens in the middle of the night but we usually get a helicopter or two,” Wright explained. “We’re going to have a security person here anyway, so having a line guy who can fuel a helicopter in the middle of the night is pretty important.”

When it comes to customer service, Wright encourages his staff to do whatever they can to help a customer. “Many of them have been brought up here, so they treat this as their home,” he said. “When we have clients coming through, they go out of their way to be welcoming for transients, but our based tenants are considered like part of the family because they probably are. Everybody knows everybody in a small town.”

Major developer with a choice downtown lot was told ‘No’