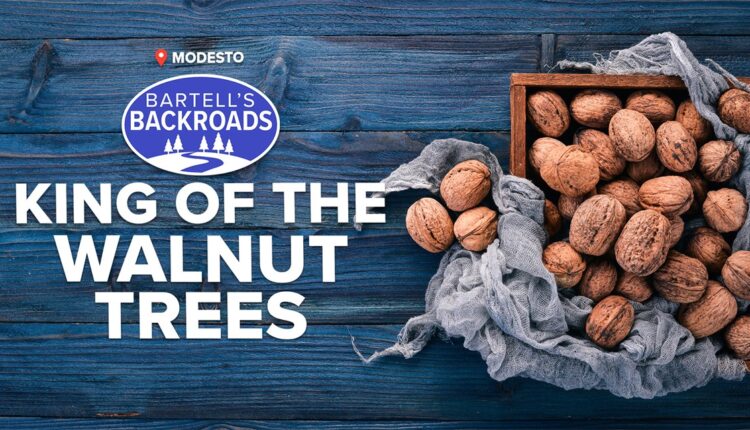 MODESTO, Calif. — Farmers are notorious for giving directions involving local landmarks. For example: “It’s at the end of the road near the bent fence post,” or “head yonder towards the old Johnson homestead.”

“If anyone wants to know where I live, I say it’s where the big walnut tree is,” said Wenger.

At the corner of Dakota and North Avenue in the Wood Colony community of Modesto stands California’s oldest known walnut tree.

“There was a black walnut up in Chico that was older but had to be taken down. Now we have the undisputable biggest walnut tree,” said Wenger.

A man by the name of Jacob Cover planted the tree in 1904. It was among the first walnut trees planted in Stanislaus County. Today, it stands over 100 feet tall and has a trunk circumference of 36 feet.

“It’s a paradox hybrid seedling. A paradox is a cross between a Black walnut and an English walnut,” said Wenger.

The Wood Colony Community was founded by former gold miners and German immigrants who worked the land and turned it into an agricultural mecca, eventually starting California’s monopoly on the walnut industry.

TAKE A TRIP ON BARTELL’S BACKROADS:
► See an interactive map of everywhere John has visited on the backroads
► Watch all of the Backroads videos
► Follow John on Facebook

Paul Wenger’s family settled in Wood Colony in 1910, and today he farms the historic property where the state’s oldest walnut tree grows. Harvesting methods have changed a lot since his great-grandfather worked the land.

Instead of waiting to pick up fallen nuts, motorized tree shakers bring thousands of nuts to the ground and sweepers follow behind to collect them for processing.

“Nuts are brought in from the field and then they go into the huller,” said Wenger. “We will run 75 tons a day or so.”

Wenger says moist walnuts might spoil and they don’t crack open as well as a dried nut. When it comes to extracting the nut from inside the shell, there are two options: by hand or by machine.

A lot of times machines smash the walnut meat into several pieces. When Wenger wants to eat walnuts, he uses a special nutcracker, one probably used by his grandfather.

“I think that it’s a horse shoeing hammer — a farrier hammer,” he said.

The walnut may be a tough nut to crack but they are loaded with omega-3 fatty acids, which are great for a healthy diet. Chances are if you are eat a walnut, the DNA from it can probably be traced right back to California’s oldest walnut tree.

“There’s root stocks from this tree planted all over California,” said Wenger.

You can visit the old walnut tree at the corner of Dakota and North Avenue in the Wood Colony community. Please be respectful and don’t pick the walnuts or park on farmers’ property.