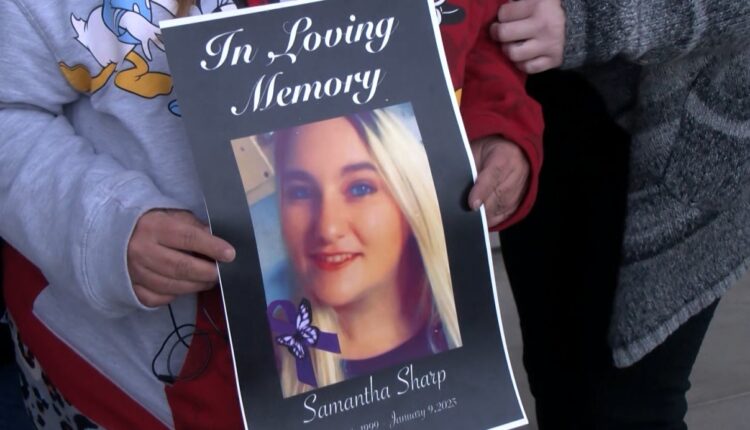 FRESNO, Calif. (KSEE/KGPE) – The man accused of stabbing his girlfriend and then dismembering her in Fresno County was in court Friday for his scheduled arraignment – along with the mother and family of the victim.

According to the Fresno County District Attorney’s Office, 22-year-old Cameron Tyler Wright allegedly stabbed and killed 24-year-old Samantha Sharp. Then Wright proceeded to dismember her body to try and hide her remains. Wright faces charges of murder, enhanced personal use of a dangerous deadly weapon, and mutilation of human remains.

Sharp’s mother, Michelle Hill, and family including aunts and cousins, were in attendance at the court hearing on Friday. Hill said she will be at every court date.

As Hill held a photo of her daughter, she reflected on the kind of person Sharp was.

“She was loving caring, she loved everybody. she trusted a lot of people. she trusted the wrong person. she would do anything for anybody.” Said Hill

Sharp leaves behind two children, one who is a newborn, that Hill said will always remember their mother – because she will make sure of it. Hill says she is facing a battle to keep her grandson.

“Today I am fighting for my grandchild that CPS is wanting to give to his family. That’s not right. They already took my daughter from me, he’s not taking my grandson,” said Hill.

Currently, prosecutors do not have a motive for the homicide. Hill is also puzzled by what could have been Wright’s motive, especially as she says Sharp was a good partner and that she loved him.

“She was good to him, I just can’t make sense of it. Why would he hurt an innocent girl that has done nothing to nobody? She never hurt nobody, she always loved everybody,” said Hill.

Hill said that she always knew her daughter was going to be safe as long as she was home with her. Saying she got scared when she moved with her boyfriend, not knowing what was going to happen, but Sharp assured her that things were going to work out.

“And she tells me, ‘mom, everything will be OK,’ come to find out none of it was OK,” said Hill.

Wright’s next appearance in Fresno County Superior Court is scheduled for January 26.