Monahan rallies to down Prowlers in five 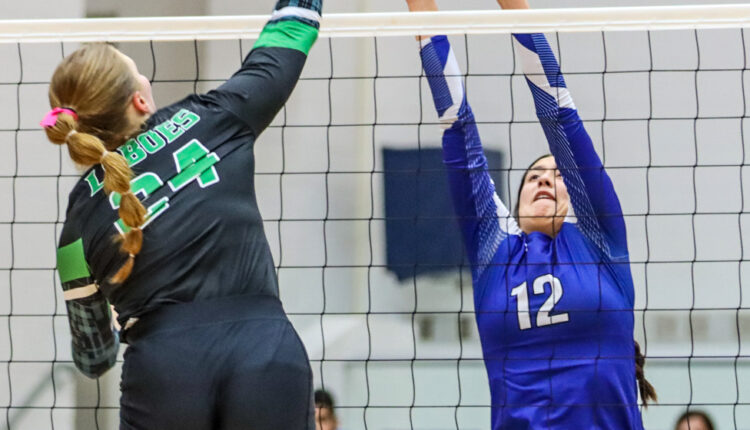 The Fort Stockton Prowlers volleyball team was dominant, Saturday afternoon against Monahans, winning the first two sets. Then the visiting Loboes regrouped and won the next three to win the match in five. The 25-23, 25-14, 19-25, 20-25, 6-15 setback for Fort Stockton was the district championship for Monahans.

The first set of the match was tied five times before the Loboes pulled out to a 12-8 advantage. With Sophia Hernandez at the serve, the Prowlers cut it to 12-11 and eventually tied the game at 14 behind Angelina Aquirre and Aryanna Gonzalez. The game wet back and froth before Monahans gained the upper hand at 22-20, but the Prowlers were able to rally for the 25-23 win.

Then the Loboes – sensing a Prowler sweep – regrouped in the third game and jumped to a 5-1 lead before the Prowlers regained their composure. Eventually tying the game at 6 before Sophia Hernandez grabbed a pair of kills for a 9-7 Fort Stockton lead.

Katheryn Mendoza, Aguirre and Urias kept the fourth set tied at 11-all before Monahans pulled away for the 25-20 win.

Smelling blood, the Loboes dominated the final set to win, 15-6.