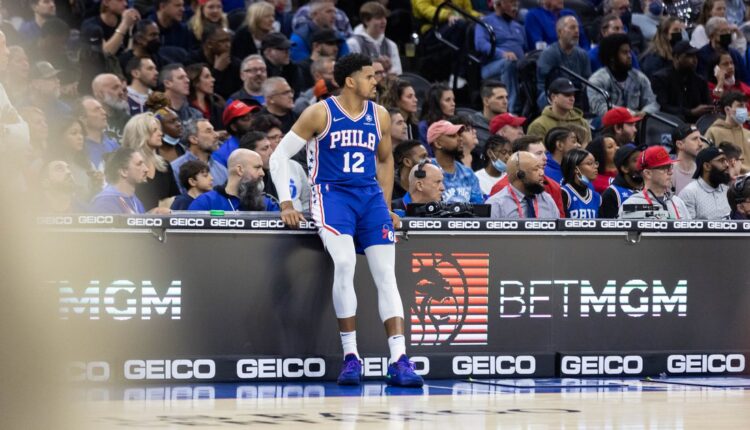 The Sacramento Kings are rumored to be a ‘possible landing spot’ for Tobias Harris if the Sixers were to look for a new home for him, according to a report from Matt Moore of The Action Network on Tuesday.

Just so it’s spelled out in black and white, this is the full note from Moore:

Sacramento is a possible landing spot for Tobias Harris if the Sixers re-engage in trade talks for him. [The Action Network]

So before we move forward, note that it does not say this is an active discussion, that the Sixers are actively shopping him, or anything except for that sentence. For our purposes, it simply puts a name on the table if the Sixers decide to move from one of their highest-paid players this summer. What comes back, and is it worth moving Harris for that return? That, at least, we can discuss.

Throughout Daryl Morey’s brief tenure in Philadelphia, there have been a number of rumors concerning Harris and the team’s supposed desire to move on from him. For the most part, those have been shot down quickly by the team, dismissing the idea that they’d trade Harris for no good reason. There was one noticeable exception in that pattern. In the week leading up to this year’s trade deadline, there was a subtle but important shift in their messaging as the Sixers played chicken with the Brooklyn Nets over the James Harden deal. Sean Marks doesn’t want to deal with us? Fine, the feeling was, because we feel good about the position we’ll be in when the free agency opens this summer. Sources said at the time that Philadelphia was confident they had partners to work with if they needed to move his salary to open up the money and bring to Harden.

With Harden in place, the Sixers don’t have the need to move Harris in order to bring in another star. What they may have urgency to do is to move Harris in a deal that turns his contract into smaller contracts spread across multiple players, in an effort to free up room below the cap apron this summer, room in free agency down the road, and/ or to simply add depth in volume.

The most important name when it comes to accomplishing all of those goals is Harrison Barnes, the veteran forward previously of the Warriors and Mavericks, who is entering the final year of his current contract in 2022-23. At roughly $18.3 million for next season, Barnes is set to make over $19 million less than Harris next season, coming off the books after that.

There’s a decent case to be made that Barnes is simply a better fit for what the Sixers need. Historically, he’s a slightly better and more willing shooter than Harris, a more consistent defender against wing-sized players, and he has been more comfortable in a role where he is simply being asked to be in the right spot rather than having a desire to run the offense. Barnes is not as versatile (or even as good) as Harris is as an offensive player, but comfort in that role matters, as is his efficiency within that role. While Harris adjusted well to being more of a spot-up player in the new-look Sixers last season, there have been small rumblings about his desire to have more of an on-ball presence moving forward, something that will be hard to manage with Joel Embiid, James Harden and Tyrese Maxey headlining for the foreseeable future. You don’t have to worry about such a thing with Barnes, who was within 0.8 points of Harris’ scoring average last season despite taking fewer shots and commanding fewer touches every night.

Unfortunately, once you move past those two primary pieces, things get messy. Sacramento’s biggest contract to move (outside of the Domantas Sabonis/De’Aaron Fox core pieces) is familiar face Richaun Holmes, who is set to make $11.2 million next season, and the Kings have to move a healthy bit of salary just to make a Harris trades legally. While Holmes would give them an older backup option behind Embiid whose finishing ability would be a boon for Philadelphia’s ball-handlers in pick-and-rolls, he’s set to make $12+ million through the 2024-25 season (the final year is a player option), and absorbing long-term, relatively substantial money just to back Embiid up is not exactly the wisest use of resources. It would complicate their ability to use the NTMLE in the short term, and there’s no reason to have a big on that sort of deal behind Embiid over the long term. Philadelphia’s best and only option would be to re-route Holmes to a team needy for bigs, perhaps using a multi-team framework in order to pick up another depth forward/wing in the process.

Whether such a move would actually make the team better is another story. Even if Barnes is a cleaner offensive fit and a better defender in an average performance, Harris’ offensive utility is something that probably goes overlooked/undervalued at times for Philadelphia. There are times when the Sixers have relied heavily on Harris’ individual shot creation/shot-making ability to break a scoring drought and prop up an otherwise ineffective bench unit. The urgency to move him has gone down over time, which is particularly true in the context of this offseason, with most insiders believing that the big-ticket free agents are all leaning toward staying put with their current teams.

If a Harris deal was the difference between the Sixers pulling off a series of moves to land someone like Bradley Beal, flipping him for cheaper depth pieces (or even a single cheaper depth piece) would make a lot of sense. But there’s been no indication that level of move is in the cards, and so you’re left questioning whether fit & contract trump talent in the trade calculus this offseason. Down to just two years left on his contract, Harris’ deal becomes a more intriguing piece of potential trade talks next season, when that big cap number will be expiring for teams to bring on for various reasons — clearing space for a Summer 2024 spending spree, moving toward a rebuild, or trying to acquire a productive player for a wantaway star who has had enough elsewhere.

Harris is not as valuable and productive as he probably needs to be on his current deal for that money, and that’s why he probably won’t ever feel completely secure in his place until his current contract expires. But the Sixers are not blind to his professionalism and willingness to be the guy who fills in the blanks, Harris proving capable of giving himself up for the group. Put between a series of mercurial, quirky stars in Philadelphia, Harris has pretty much always been the steady, gentle voice of reason, the guy who tries to bring people together. As we saw on the floor in the playoffs, the Sixers might lack the sort of tough, hard-nosed players who can junk a series up and make you feel uncomfortable. But having someone like Harris in that room, a player with some stature who can keep the temperature from hitting a boiling point, is something coaches and players will tell you can get overlooked by fans and media.

The full picture is going to become clear soon enough, and then all the rumors will stop so we can have some moments of summer serenity.