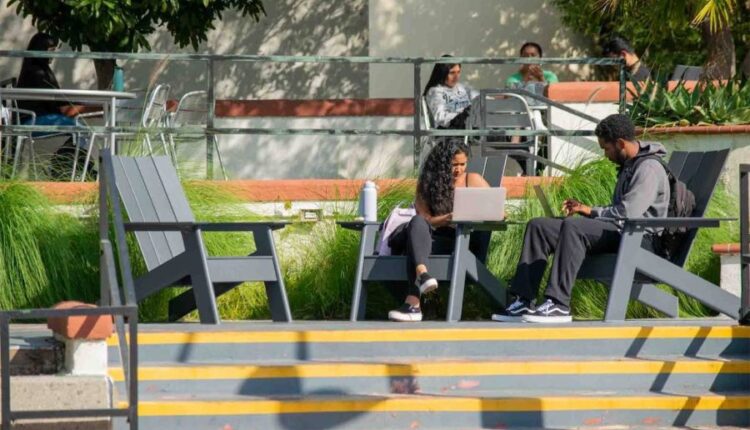 Yancey Modesto, director of facilities, planning and construction at Cal State LA, said in an email that his department’s goal “has been to provide a variety of seating choices that allow for different uses, such as studying or relaxing.”

“The university wanted to diversify the outdoor seating options for students, faculty and staff to study, gather and build community across different areas of campus,” Modesto said.

“We learned from our counterparts at other universities that the Adirondack lounge-style chairs were popular options for students because they allow for comfortable individual or communal seating,” Modesto said. “They provide enough armchair space for a notebook or laptop.”

Some students are enjoying the ambiance that the new Adirondack chairs have brought to the campus.

The Adirondack chairs are “better than the benches around,” Sar said. “With this, I can actually sit back and stuff.”

Cal State LA has had more students on campus, which may have demanded more seating.

“It’s been lively,” Sar said. “More people are out here to study and take advantage of these seatings and do their own thing, which is nice to see around the campus.”

Meadows said the university is doing well with accommodating students coming back to campus, and the new seating options are part of that.

Between the virtual learning of previous semesters and the current in-person one, Meadows has seen the transition from a sparsely inhabited campus to a more active, crowded university environment.

“It was kind of a ghost town, so there wasn’t anything like this,” Meadows said, referring to the new chairs and tables. “Campus has gotten more crowded now, and these additions definitely help.”

The facilities, planning, and construction department does not currently have a suitable cost estimate since some deliveries for the project have not been completed.

Modesto said the university plans to implement more seating in the future as well, including bench and planter seating, as well as several large umbrellas to increase the number of shaded areas across campus.