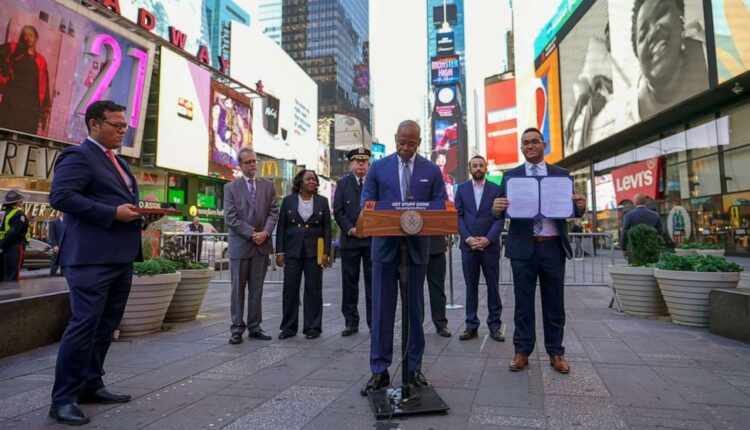 New York City Mayor Eric Adams signed legislation Tuesday establishing how the city will make Times Square a gun-free zone even as the state law underpinning the policy was overturned in federal court.

Adams said the 56 million tourists predicted to visit New York City this year should not have to “live in fear” as they walk through Times Square, often deemed the “crossroads of the world.”

“We will not allow them to live in fear or disturb that someone is walking around with a gun ready to harm them.”

Adams, who owns three guns, said the designation of Times Square as a sensitive location was not intended to punish lawful gun owners. Rather, he and other city leaders said it is untenable to have so many guns in a place as densely packed as Times Square.

“It is plain good old common sense that no one should have a gun in Times Square,” said Manhattan District Attorney Alvin Bragg, who joined the mayor for the bill signing.

The law defines the boundaries of the Times Square sensitive location and authorizes the NYPD to implement it.

Last week, a federal judge in Syracuse struck down portions of the state’s new gun law, including the part that designates all of Times Square as off limits to conceal carry.

“We just have to wait and see what happens,” said Steven Lewis of the city’s law department.

Hospitals Have Been Slow to Bring On Addiction Specialists