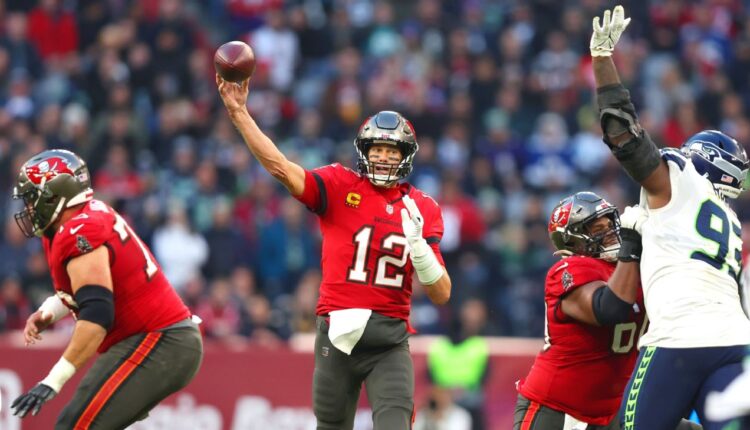 On Thursday, the Carolina Panthers’ ground game continued to chug along without Christian McCaffreyas they ran over the Atlanta Falcons 25-15 in Carolina.

Our NFL Nation reporters react with the biggest takeaways and lingering questions off this week’s matchups and look ahead to what’s next. Games are Sunday unless noted. Let’s get to it.

Jump to a matchup:

What to know: Seattle’s 12-hour flight back from Munich is going to feel a lot longer after their worst performance since a Week 2 loss to San Francisco. As impressive as their late comeback bid was, they were awful on both sides of the ball for the first three-and-a-half quarters. Geno Smith and the offense looked out of sorts and their defense couldn’t get off the field or get anywhere near Tom Brady. Maybe they were jetlagged from the cross-Atlantic trip. Maybe their advantage in team speed was neutralized by the sloppy turf that had players slipping all day. Whatever it was, they looked nothing like the team that entered Sunday winning four straight games.

What happened to the Seahawks’ resurgent defense? They were in the midst of another remarkable turnaround, going from one of the NFL’s worst units in several categories over the first five games to one of the best since. But their early-season struggles showed up again. Only getting one official hit on Brady is somewhat understandable given how quickly he gets rid of the ball. But allowing Tampa Bay to convert 10 of 15 third-down tries was not. The Seahawks appeared to be unprepared for how much Tampa Bay ran the ball. — Brady Henderson

What to know: Bucs wide receiver Chris Godwin told Mike Evans just before Brady’s game-winning touchdown drive against the Los Angeles Rams last week – “This is the drive that’s gonna get us back on track… not for the game but for the season.” His premonition might turn out to be true. With a win over Seattle (and the Seahawks made it close with two fourth-quarter touchdowns) the Bucs go into the bye week 5-5 and on the strength of two straight wins.

What did the Bucs offense do different against the Seahawks? The Bucs had improved interior run blocking, they ran the ball better and they incorporated a lot more play-action after rarely using it two weeks ago against the Ravens. And they were finally able to convert on third down and in the red zone. They went 10-of-15 on third down. They hadn’t converted 50% of their third downs in a game since Week 5 against the Falcons and have only done it two other times all season. They also went 2-for-2 in the red zone. They hadn’t scored more than two touchdowns there since Week 4. — Jenna Laine

What to know: The Panthers actually are a better running team since they traded star Christian McCaffrey to the San Francisco 49ers after Week 6. This doesn’t mean the backs they have are better. It just means they are committed to it, as they were on Thursday night with 47 rushes for a season-high 232 yards, including 31 carries for 130 yards by D’Onta Foreman. They are averaging 159.5 yards rushing since Week 7, sixth best in the league. They averaged 90.3 the first six games with McCaffrey to rank 26th. A good run game and defense gives you a chance to win.

Will PJ Walker remain the starting quarterback? Walker had only 108 yards passing, completing 10 of 16 pass attempts. He should have had an interception in the end zone and on the same play missed tight end Stephen Sullivan, who was wide open. He also took a sack that knocked the team out of field goal position and still seems hesitant to run. That and the Panthers wanting to get a look at Sam Darnold opens the possibility for a change, but it seems doubtful coming off a victory. It remains a week-to-week thing.–David Newton

What to know: The Falcons were a complete mess Thursday night. They couldn’t stop the run defensively. On offense, they couldn’t run or throw with the efficiency they had before. Even special teams were woeful. Nothing was working for Atlanta.

What happens at quarterback? Falcons head coach Arthur Smith said he never thought about replacing Marcus Mariota with rookie Desmond Ridder during the game. And I’m not sure they should replace Mariota in the short-term, either, if the Falcons believe he gives them the best chance to win. Mariota is effective with his legs, and the pass protection hasn’t been good, which would be more problematic for a rookie. At some point the Falcons might want to start to see what they have in him in games, but for now sticking to their development plan seems to be the prudent play.– Michael Rothstein