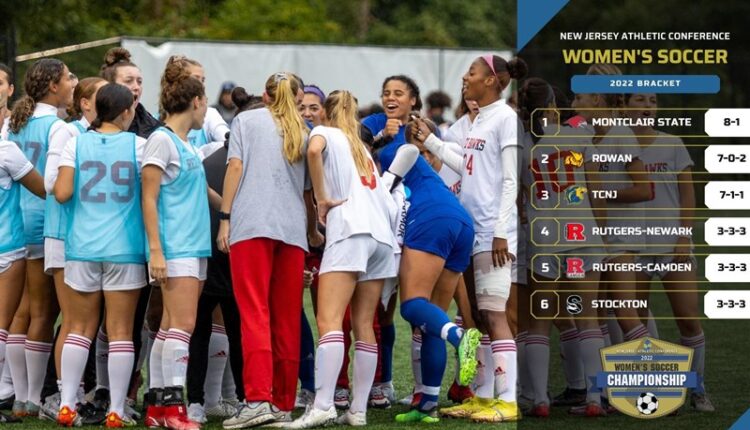 PITMAN — Montclair State and Rowan earned the top two seeds and first round byes as the NJAC Women’s Soccer Championship bracket was announced upon the conclusion of the regular season on Wednesday night.

In addition to MSU and Rowan, the six-team tournament features No. 3 seed TCNJ, no. 4 seed Rutgers Newark, no. 5 seed Rutgers-Camden, and no. 6 seeds Stockton.

The Red Hawks clinched the top seed with a 3-1 win over Kean combined with a Rowan/Stockton draw in the regular season finale and finished with an 8-1 NJAC record. The Profs finished second after a scoreless draw with the Ospreys in the finale. With the bye, both teams advance to the semifinal round.

The tournament opens with the quarterfinals on Saturday, Oct. 29. Rutgers-Newark will host Rutgers-Camden, with the winner advancing to the semifinal round game at Montclair on Wednesday, Nov. 2. TCNJ will host Stockton on Saturday and the winner will advance to the other semifinal match at Rowan on Wednesday.

The championship is slated for Saturday, Nov. 5, at the highest remaining seed with the winner earning the NJAC’s automatic bid to the NCAA Division III Women’s Soccer Tournament.

Expect to spend more for Fall holiday festivities this year