No. 7 USC’s defense bites back in win over Fresno State 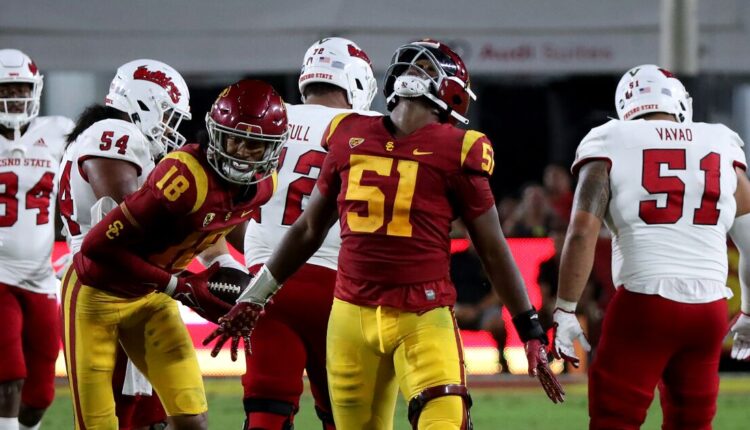 The possibility loomed like a dark cloud over an impossibly bright start to the season for USC, creeping into every conversation about the Trojans’ trajectory, a caveat it had yet to counter.

Those concerns crept back into the Coliseum throughout USC’s 45-17 victory on Saturday night, even as the Trojans kept a largely comfortable lead throughout. They rolled in as Fresno State flew up and down the field for 421 yards and reverberated as Bulldog running backs burst through massive holes in the USC front.

But again, that dark cloud was whisked away before the Trojans found themselves in too dire of straits. This time, however, it wasn’t just Williams who whisked USC out of danger.

This time, USC’s defense wouldn’t need four takeaways to do its part.

The Trojans still added two more turnovers to their heaping, early-season pile. But their most encouraging moments came at the most critical junctures Saturday, just as Fresno State threatened to break the game open.

When Fresno State appeared primed to push its way back in the game, a series of big-time stands from USC’s defense thwarted any hope the Bulldogs had of climbing back.

The first of those inflection points came from rushing end Solomon Byrd, who burst around the edge during the opening possession of the second half. Just a few weeks earlier, Byrd was all but buried on USC’s depth chart. Now, he was slamming Fresno State quarterback Jake Haener to the grass for a sack fumble that would not only knock Haener out of the game, but turn the tides for USC’s defense.

Three plays later, the Trojans scored on a 23-yard run from Travis Dye, pushing their lead to 18.

From there, USC’s defense allowed just a single score from a Fresno State offense that came into Saturday as one of the most prolific in college football through two weeks. It halted one drive with a third-down sack from Brandon Pili and another from Tuli Tuipulotu. It even added a final goal line standing at the one yard line for good measure.

Trojans running back Austin Jones breaks away for a 44-yard gain against Fresno State. He finished with 110 yards and a touchdown in 12 carries.

“They don’t get extra credit for explosives or getting down in the red zone,” Byrd said. “At the end of the day, we’re always three plays from getting off the field.”

USC still often took too many plays to get off the field. But as the Trojans rolled to a third consecutive victory, they could rest easy knowing their defense was nowhere near to breaking. Not yet, at least.

“That’s kind of who we are at this point. We’re a bend-but-don’t-break defense,” USC linebacker Shane Lee said. “We’ve got to figure out exactly what we want to be and how we want to do it going forward. We have to improve in a lot of ways, but it’s a foundation.”

Another strong performance from Williams certainly helped lay a sturdy foundation. The quarterback finished with 284 yards and two touchdowns through the air, while adding two more on the ground. The Trojans also boasted two 100-yard rushers, as Travis Dye and Austin Jones rolled over the Fresno front, adding a touchdown apiece.

The defense also benefited from another blazing start, as USC scored touchdowns on each of its first three possessions for the third consecutive week.

Just like last week — and the week before that — USC marched down the field on its opening drive and made an early statement. Dye got the Trojans offense off the ground, tallying 42 yards with his first four carries. Williams completed two tightly covered passes to convert two third-and-longs on USC’s first possession, before finding Jordan Addison in the end zone for a three-yard score, Addison’s fifth in just nine quarters for USC. 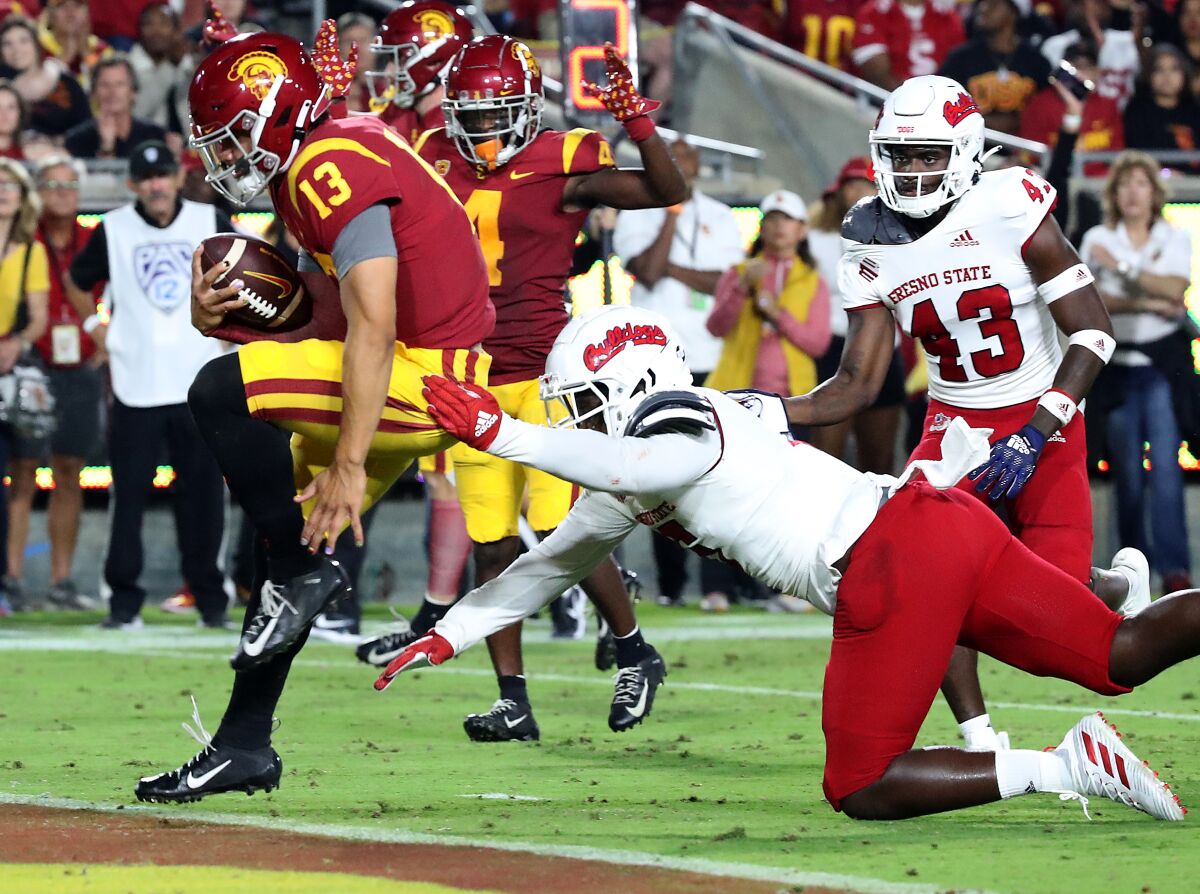 Williams punctuated the Trojans’ next trip with a touchdown, faking a handoff before scampering eight yards to give USC an early 14-point lead and Williams his first rushing score of the season. He added another on the next possession, giving USC’s quarterback his first multi-score game on the ground.

But the more stunning early statement came on Fresno State’s first drive, as USC’s defense forced an immediate three-and-out, setting a strong tone it hoped would hold for the rest of the night.

Initially, it lasted all of one possession, as Fresno State took just five plays on the next drive to find its way into the red zone. It wouldn’t get much further than that, as USC’s defense once again stood tall with its back against the end zone, stopping the Bulldogs on three consecutive plays inside the 10 to force a field goal.

The defense wouldn’t fare so well on its next try, as Fresno State flew down the field again, this time finding the end zone in fewer than 90 seconds.

The message in those uncertain moments?

Two plays later, USC found itself right back in the red zone.

This time, it couldn’t convert, as Williams was scrambling for dear life in the pocket, before he was sacked outside of field-goal range.

But USC returned to its high-flying offensive ways in the second half while its defense made the big plays necessary to delay any existential concerns about its reliability and consistency for at least one more week.

Man armed, approaching with knife shot by CHP in Auburn

The Most Career Assists By Position: John Stockton Leads With Over 15K Assists, No One Will Ever Surpass Him