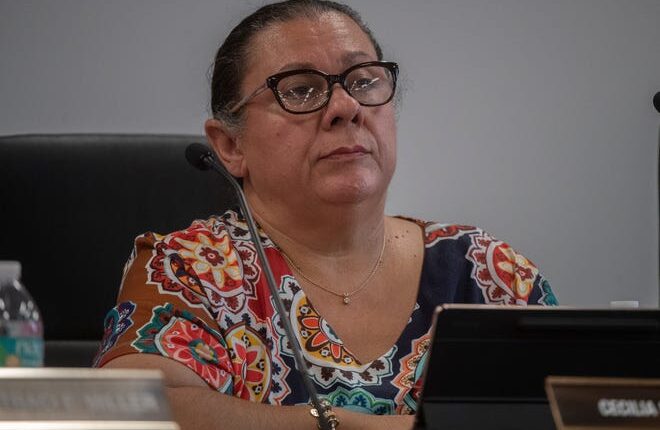 The Stockton Unified School District Board of Trustees voted 5-2 to shelve any discussion of any more town hall meetings on the scathing June grand jury report until the Aug. 23 board meeting, when a formal district response will likely be available.

The second grand jury report on Stockton Unified in a year reported financial mismanagement, poor business practices and a lack of transparency. Comments from Board President Cecilia Mendez cast doubt on further accountability to the public.

“No town halls. We’re not having any more town halls right now,” a frustrated Mendez said. “We need to respond legally to (the grand jury) on the questions they have asked … I want to do that as soon as possible.”

When asked by Mendez — who made the motion and was visibly upset, cutting off other board members when speaking — SUSD lawyer Dr. Jack Lipton said a draft response to the June grand jury report could be ready by the Aug. 23 regular board meeting.

Board Trustees AngelAnn Flores and Maria Mendez voted against the motion. Flores said the board has betrayed the public after promising town halls for discourse between the community and the board.

Consultant:Stockton Unified’s safety plans dated or out of compliance with state law

“If we just respond (to the report,) we didn’t give the public their discussion with us, and were still not answering and we’re still not being transparent. … The motion for this vote is in clear disrespect to the results of the grand jury report,” Flores said as she cast her “no” vote. “This is exactly what they called us out on.”

Flores had made a motion — that died due to lack of a second — to move the town hall scheduling discussion to Aug. 23 on the account that many members of the public had expressed interest in being a part of the discussion but were unable to attend the Aug. 16 meeting because of the short notice. Flores also noted that she was not involved in any discussion about the draft response to the grand jury report.

‘This is not the community we need:’ trustee cites ‘nasty’ public comments

Trustee Alicia Rico, who called remotely, said she would not partake in any town halls after she heard the “nasty” audio from the last meeting.

“They’re asking for respect, transparency — they’re asking for everything. What did we get back? … The audio from the last town hall was nasty. They have no respect for people,” Rico said. “This is not the community we need.”

Stockton Unified held their first town hall on the grand jury report Aug. 4. To the disappointment of many who attended hoping for a two-way conversation, trustees and district administrators did not respond to any of the public’s comments.

Up to $2K for water-efficient landscaping in Fresno