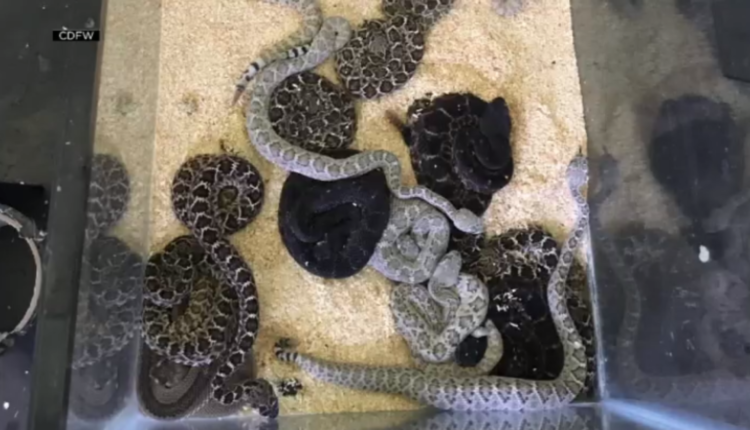 SACRAMENTO (CBS13) — A suspect sweet on rattlesnakes was busted for allegedly breeding and selling some of the most dangerous ones on the planet.

“Rattlesnake trafficking itself is pretty rare,” said Captain Patrick Foy with the California Department of Fish and Wildlife.

READ MORE: ‘The Last 6 Months Have Been A Lot Of Pain’: North Highlands Family Desperate To Sell Home After Fatal Car Crash Kills 4

Wildlife officers say an Amador County man was trying to sell the venomous vermin at a reptile expo and online, but that was just the beginning.

“They went to his house and found a total of 59 rattlesnakes,” Foy said.

Investigators identified most as western diamondbacks, which are native to California and among the deadliest in the world.

“For a guy to actually advertise on Craigslist or Facebook Marketplace or whatever other social media might be there is really bold,” Foy said.

The bizarre case begs the question: Why? For food? Snakeskin accessories? The allure of owning an exotic, dangerous animal?

READ MORE: ‘This Is A Loss For Us’: Major Setback For Modesto Salvation Army As Donations Catch Fire

Wildlife officials admit this one hath them scratching their heads.

“There are some people who…they want them. And for whatever reason, it’s hard to give you a good answer on a motivation,” Foy said.

The suspect now faces a host of misdemeanor charges that could lead to thousands of dollars in fines and land him in jail for up to six months, if convicted.

Investigators say it appears this isn’t a one-time deal for this guy. They say they have evidence that he’s been illegally breeding and selling rattlesnakes for the last 10 years.

“If it’s trafficked in California, it’s a high priority for us,” Foy said.

So what happens now to all those snakes? Wildlife officials say depending on what a judge decides, the reptiles could be used for scientific studies — or what they call “venom extraction” to produce anti-venom.