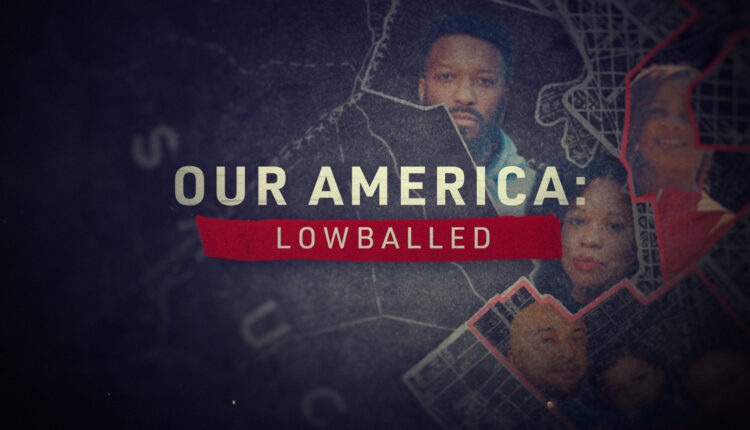 SAN FRANCISCO– Black and Latino families have had their homes appraised for up to $500,000 less than expected, and race has shown to play a significant factor. According to an ABC Owned Television Stations data analysis of more than 50 million home loans, refinance applications in predominantly Black neighborhoods are nearly five times more likely to be under-appraised than in white communities. The analysis also found home-purchase loans in Black neighborhoods are more than twice as likely to be under-appraised. To raise awareness on this systemic issue affecting families across America and to equip viewers with information on what they can do if they find themselves lowballed in an appraisal, ABC Owned Television Stations has produced, “Our America: Lowballed.”

Watch the official trailer in the video player above.

Check back to watch the full special, premiering Dec. 2 wherever you stream: Fire TV, Android TV, Apple TV and Roku.

Take Action Against Appraisal and other Housing Discrimination

When it comes to housing discrimination, it can feel isolating and difficult to navigate. You might second guess whether the treatment you received was discriminatory, because you haven’t heard a friend or family member talk about it. But the reality is more than 4 million acts of housing discrimination happen each year in the US but less than 1% are reported, according to the National Fair Housing Alliance.

We have compiled a list of vetted local resources and a step-by-by guide to help you or someone else facing this issue take action.

Where do I start?

Know your rights: The Fair Housing Act of 1968 makes it illegal for housing providers like landlords and real estate companies along with banks, lending institutions, homeowners insurance companies or municipalities to discriminate because if a person’s race or color, religion, sex, national origin , familial status or disability. Several states such as California residents provide additional protections against discrimination on the basis of other identities like age, sexual orientation, or military status.

Discrimination may look like receiving a lower home appraisal because of a protected class; refusal to sell, rent, or lease rooms, apartments/condos, or homes; stating a property or listing isn’t available when it actually is; denial of a loan or homeowner’s insurance; termination of a sale or rental agreement without reason; being offered worse terms/conditions in a lease based on a protected class; or refusal to offer reasonable accommodations for a person with disabilities.

If I receive an appraisal that’s lower than expected, where do I start?

If you are in the process of refinancing your existing home mortgage and receive an appraisal that is lower than expected, you should ask for a Reconsideration of Value (ROV). The process varies from lender to lender, but in the most basic terms is a dispute of the appraised value provided by an appraiser. This is the only chance in the lending process for the borrower to point out factual errors, omissions, or inadequate comparable properties, according to the Consumer Finance Protection Bureau. This is also the only chance for the borrower to provide evidence that the appraisal was illegally influenced by bias or discrimination. An ROV request should include for why the appraised value should be adjusted, such as additional evidence recent comparable sales. Through the Reconsideration of Value process, the lender may accept or deny the request. If accepted, the lender may ask the appraiser who performed the appraisal in question to reconsider the assigned value based on the additional evidence provided. After reviewing the documentation provided, the appraiser may adjust the value or keep the appraised value the same. In some cases, the lender may assign a second appraiser to perform a new appraisal.

How do I find support?

It can be confusing and even isolating as you try to report an instance of housing discrimination, but there are local and national housing civil rights non-profits waiting to assist you. Visit the National Fair Housing Alliance website to locate local organizations that will assist you in filing a complaint with your state and potentially the department of fair employment and housing.

How do I file a complaint with my state?

Each state’s process to file an administrative complaint is different. Generally, you have one year from the last date of known discrimination to file an administrative complaint with the state. We have located the links to file complaints at the state level for each of our ABC Owned Television Station markets. Remember, your local fair housing organization can assist you with filing your complaint and help keep track of your case as it moves forward. Note: It may take state’s several months to update you on the status of your complaint as it is being investigated. It could take up to a year (or longer) to receive the results of the investigation spurred by your complaint.

How do I file a complaint with the federal government?

You have one year from the last date of known discrimination to file an administrative complaint with the Department of Housing and Urban Development’s Office of Fair Housing and Equal Opportunity. For example, if you receive an appraisal you believe is influenced by discrimination because of race or other protected class and received the report on October, 6 2022 you have until Oct 6, 2023 to file a complaint. Having a local fair housing group join you in filing your complaint may increase your chances of making it through the intake process and lead to an investigation. This process could also take several months to learn if your complaint has made it through the intake process and if it will be investigated. An investigation is likely to take another several months to complete, if not longer.

If you have faced discrimination during the lending process (ie appraisals) you may also want to file a complaint with the Consumer Financial Protection Bureau.

What’s the point if the process will take so long?

Filing a housing discrimination complaint may have a number of outcomes. Results range depending on the type of discrimination. If you were denied an apartment lease because the leasing agent told you the unit was unavailable and it actually was, a favorable ruling could require the landlord/housing provider to allow you to rent the property. If you were denied more favorable mortgage loan terms, a ruling in your favor could help you lock in that lower interest rate. You may even receive monetary compensation if HUD or state regulators reach a conciliation agreement with the person or entity accused of discrimination. Take this Chicago case for example: HUD approved a conciliation agreement between JPMorgan Chase Bank and a Black homeowner over allegations of appraisal discrimination based on race. Because of the homeowner’s complaint and the agreement reached between HUD and JP Morgan Chase bank, the lender received a settlement of $50,000 and promised to provide lending advisors with additional training on handling appraisal discrimination complaints.

You may also want to consider filing a federal lawsuit. This process may take an extensive amount of time to play out, but could lead to conciliation in the form of financial compensation if the courts find your civil rights were in fact violated because of an act of housing discrimination. If your local fair housing group accepts your case and agrees to assist you in filing a complaint with the state and/or federal government, a staff attorney may also be able to assist you in filing a lawsuit and representing you in court proceedings.

San Francisco And Sacramento: Win Passes To Advance Screenings Of ‘The Banshees Of Inisherin’