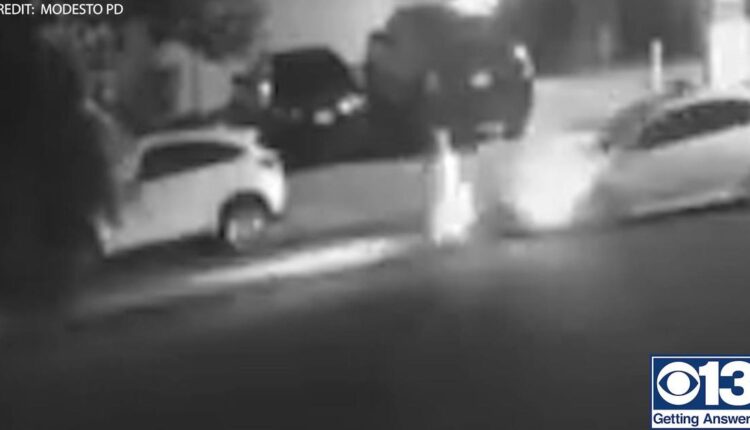 MODESTO – Police in Modesto are searching for the driver who hit a pedestrian on Tuesday night and then allegedly drove away.

According to the Modesto Police Department, on Tuesday around 11:30 pm, a 72-year-old woman was walking near the intersection of Snyder Ave. and Thornhill Wy. when a light-colored sedan that was traveling eastbound on Snyder Ave., hit the woman, knocking her to the ground.

In video provided to CBS13, the vehicle stayed on the scene for about two minutes, and during that time, did not exchange information with the woman or contact the authorities, police say. At one point, a figure got out of the front passenger side of the vehicle, walked around to the driver’s side, and got in. The vehicle then left.

The pedestrian was transported to an area hospital with minor injuries.

The driver of the vehicle is still at large. Police say that no license plate information or information about the driver was obtained during the investigation.

Hundreds turn out for Stockton’s Run & Walk Against Hunger