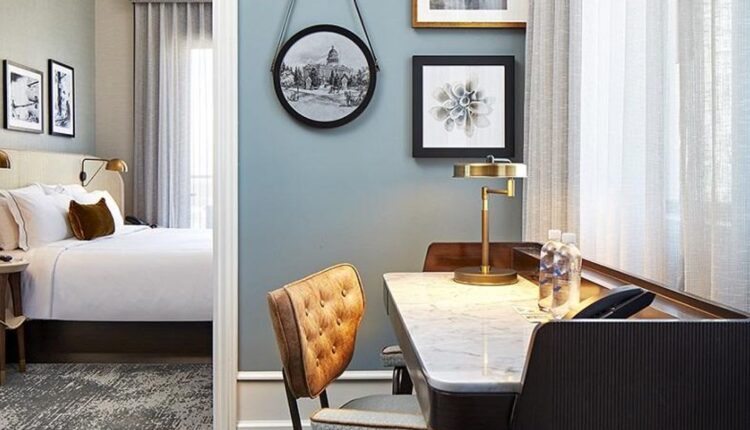 Everything I know about Sacramento comes from the news. It looms large in my imagination, a political fairytale-land ruled by slick-talking princes of democracy.

At the city’s heart is a 97-year-old tower, an Art Deco high rise that stands sentinel over the state capitol building just a couple blocks away: the Citizen Hotel.

There’s trouble in the land of Sacramento. People are spitting mad over the upcoming midterm elections, representatives and their families are facing threats of violence, and the kingdom of California is undergoing unprecedented levels of homelessness, drought, and wildfire. Politics are getting deadly serious.

But not at the Citizen. Inside its 14 stories, the art of satire is still alive and well. A recent multi-million dollar renovation has transformed the hotel into a canvas of editorial cartoons, historical quotes, and stately sophistication. And everyone, no matter where on the political spectrum they fall, is welcome.

It’s late afternoon when I arrive but, inside the hotel’s cocoon, time seems to have stopped sometime around the Nixon era. Dim lighting and navy blue built-ins are more library than lobby. Volumes and volumes of historical newspapers line the walls and plush wingback chairs are arranged atop patterned Oval Office–esque carpeting.

But the scholarly decor stops at the elevator. In my one-bedroom suite on the eighth floor, sunlight streams. Chic velvety seating, colorful throw pillows, and a marble-topped desk dominate the living area. An upholstered headboard outfitted with brass-capped lamps anchors the bedroom. The bath, all white tile and luxe amenities by London atelier Gilchrist & Soames, is inviting.

Despite half a lifetime in Northern California, I’ve never actually been to the mythic land of Sacramento. Now’s my chance to see it all.

Although my car is safely parked with the Citizen’s valet, the hotel is so central that it’s somehow just a 20-minute walk from everything I want to do: Old Sacramento, the Crocker Art Museum, Sutter’s Fort, and the R Street Corridor. My feet hit the sidewalk just in time to catch the setting sun over the Golden Gate’s yellow sibling, the Tower Bridge, and meander down the wooden boardwalks and through the candy shops at the historic waterfront. With an hour to spare before my dinner reservation, I sink into a couch with a beer at Rusthaller BSMT, the cozy downtown taproom for the Dixon hopyard and farm of the same name.

For dinner, I head back to the Citizen’s in-house eatery, Grange. The Michelin-recognized restaurant kicked Sacramento’s farm-to-table movement into high gear when it opened in the late aughts and remains at the top of the city’s culinary terrain. Inside, windows line the exterior wall from floor to soaring ceiling. Softly glowing copper chandeliers float over the dining room. Above the bar, green plants march like soldiers across the walls.

The Michelin-recognized Grange at the Citizen hotel.(Courtesy of the Citizen)

I sort through entrees of albacore, dry-aged New York strip, and rack of lamb to settle on olive oil-poached halibut, a delicate filet encircled with chickpeas and cauliflower, and accompanied by a crunchy, attention-grabbing pistachio dukkah. My companion opts for a deeply satisfying housemade uni spaghetti, a wild bird’s nest of grilled shrimp, pickled chanterelles, and fried garlic.

With a grand, two-story vault to store it in, Grange’s wine list is a monumental send-up to California wine regions, from Paso Robles to Mendocino. Seasonal cocktails like the Apple Bottom Dreams (made with apple-infused vodka, sloe gin, cucumber, and lemon) are heady counterpoints to the sweetness of desserts like lemon poppy seed glazed beignets and caramel apple hand pies with rosemary sweet cream gelato and almond crumb .

That night, belly full, head buzzing, I slip into 300-count Italian linens, lay my head on an overstuffed down pillow, and fall almost asleep.

One of the best things about the Citizen is that Grange isn’t just a high falootin’ dinner spot; it doubles as the hotel’s daytime restaurant, too. That means breakfasts of killer quality—pork belly Benedict with chipotle hollandaise, pumpkin pancakes with cinnamon streusel, croissant sandwiches stuffed with bacon, and so much more. I need the fuel. By the end of the day, I will have amassed nearly 20,000 steps hoofing it around the city.

Seasonal farm-to-fork eats at Grange include dishes like seared scallops, rack of lamb, and grilled pork loin with smoked pork belly.(Courtesy of the Citizen)

When I return to my room that evening, I’m greeted by myself, or at least a version of it. As part of the hotel’s Caricature Package (which also includes a $100 credit at Grange, valet parking, and cocktails), Pulitzer Prize-winning editorial cartoonist Jack Ohman has drawn me in his signature style. It’s spot on.

The morning comes brisk and bright on my last day in the capital. Portrait in hand, I climb down from my tower in the sky and leave Sacramento behind. Democracy may be under threat but the kingdom is still strong and the Citizen Hotel keeps watch.

KHN’s ‘What the Health?’: ACA Open Enrollment Without the Drama