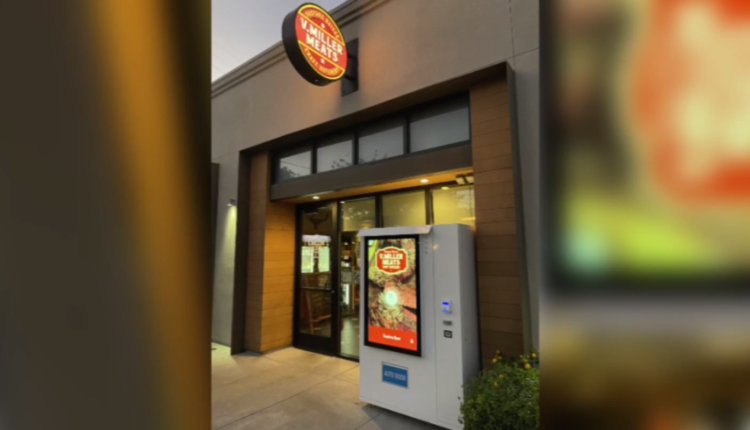 A variety of factors, from staffing shortages to rising costs of supplies and a customer base heading back into the office after working from home, led him to think differently.

“Over the last 6-8 months, we were seeing less and less of these people and we missed them,” Miller said. “So what we were able to do was, with the machine, people can shop before work or after work now that they’re back to work.”

That led him to a company called Applestone Solutions and an idea that seemed simple and bizarre at the same time: a vending machine for meat.

“Everybody we’ve known that has seen it is like, ‘Oh my God,’ ” Miller said.

The premise is simple: customers looking for convenience can get pre-packaged cuts without setting foot in the store. And the machine will be a 24/7 operation so regulars who work off-hours or just come by the store a little too late aren’t left in the lurch. No meat stays in the machine for more than seven days and Miller says the shop has rigorously tested it for the last three weeks before its’ launch on Thursday.

“All the products that go in there are ground fresh and then vacuum sealed here in the shops,” Miller said.

READ MORE: 1 Dead In RV Fire Just Outside Of Dixon

The machine itself is essentially a big temperature-controlled fridge. Miller gets a notification if the temperature deviates too hot or too cold. If there’s any type of issue with power or even security, he gets a ping on his phone.

Customers can use the touch screen to select the type of meat they want and how much, swipe a card and the meat is gently dropped into the auto door.

“If there’s not a lot of options late night this is one to check out,” says Sacramento resident Jordan Matthews.

Miller sees a big picture of the future of machines in different areas in the city as long as doesn’t compromise their quality or supply lines. Some regulars, like Judi Geldermann, say that as long as they can make it within business hours, they’ll be shopping the old-fashioned way.

“I don’t even use that thing where you get your money out of the bank,” she says, referring to an ATM. “I go into the bank!”

Miller said one of his partners texted him this week asking: “Ready to change the world?” He initially laughed it away but realized that this could be a big moment for local businesses specializing in food or goods. An ability to be able to service customers in off-hours while maintaining their quality can open a door for legitimate competition with bigger store chains that have the infrastructure to be open longer.

MORE NEWS: Ford Recalls 2.9 Million Vehicles That Could Roll Away When Placed In Park

“They’re supporting local farms, they’re supporting a local business,” Miller said. “But before and after hours and they need meat, they previously had to go down the road. Now this opens that up.”