Postseason comes to end in 1-0 loss to Stockton 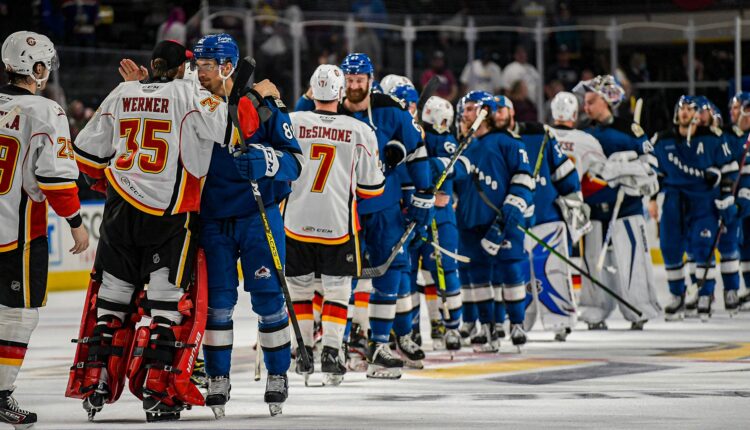 LOVELAND, CO. – Stockton goaltender Dustin Wolf turned in his third shutout of the playoffs, stopping all 40 shots he faced, to lead the heat to a 1-0 win over the Colorado Eagles in Game Four on Sunday. The victory also capped off a 3-1 series win for Heat, who now move on to face the Chicago Wolves in Western Conference Final. Forward Justin Kirkland netted the lone goal in the contest, burying a wrister from the slot 3:29 into the third period. Colorado goalie Justus Annunen was sharp in net, turning aside 34 of the 35 shots thrown his way.

The first period saw Stockton outshoot the Eagles 13-11, but neither side would be able to find the back of the net and the two teams would head to the first intermission with the game still scoreless.

Colorado and the Heat would each earn a 5-on-3 power play in the second period, but neither would be able to take advantage of the extra numbers. The Eagles would put up 20 shots in the middle frame, the most for the team in the 2022 postseason, as Colorado outshot Stockton, 20-13 and the two clubs would head to the second intermission still deadlocked at 0-0.

The game’s first goal would finally materialize 3:29 into the third period when Kirkland fielded a pass between the circles and lit the lamp with a wrister to give the heat a 1-0 lead. The Eagles would put nine more shots on net in the final frame, but would come no closer, falling by a final score of 1-0.

Colorado outshot Stockton 40-35, as the Eagles finished 0-for-4 on the power play and 5-for-5 on the penalty kill.

Stay tuned to ColoradoEagles.com to stay up to date on all of the latest Eagles announcements and a list of upcoming appearances. Season tickets for the 2022-23 can be purchased by calling the ticket department at (970) 686-7468.

Hepatitis A Outbreak In Strawberries, Certain Brands, According To FDA – CBS Sacramento