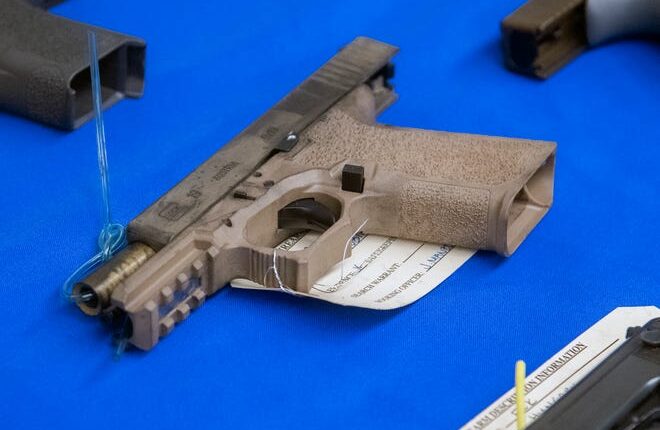 Prosecutors say a Stockton man charged with three counts of murder on Oct. 18 used a “ghost gun” — a type of firearm nearly impossible to link to anyone using current investigative methods — to carry out the killings.

Ghost guns are firearms without serial numbers, built from parts or made using 3D printers. They are virtually untraceable because they do not have serial numbers.

San Joaquin County District Attorney Tori Verber Salazar said Oct. 18 that prosecutors believe in an untraceable firearm was used in the fatal shootings of three men in Stockton between Aug. 30 and Sept. 27.

Investigators say the shootings are part of a series of six homicides in Stockton and Oakland for which Wesley Brownlee, 43, has been charged with three counts of murder. Authorities have shared little additional information about evidence in the case against Brownlee, who is represented by public defender Allison Nobert.

“I’m just going to say … it was a polymer,” Verber Salazar said of the gun at a news conference after Brownlee’s arraignment on Oct. 18

When a crime is committed with a traditionally-made gun, law enforcement can use the serial number to track where and when it was sold and the purchaser.

In contrast, a “ghost gun” can be made starting with a frame that does not have a serial number and parts bought separately.

The result is a firearm not traceable through transaction records between manufacturers, distributors and buyers, according to the Giffords Law Center. Because buyers are purchasing gun parts and not finished guns, they also don’t have to undergo background checks, according to the center.

When investigating homicides, “I need the gun, and then I need to put the gun in the hand of the bad guy,” retired FBI special agent John Sommercamp said.

But with ghost guns, “you’re never going to go backward and say, how did it get handed off to (the killer), for example,” he said. “(But) if I can catch him with the weapon, or at his house, then I got him.”

Stockton police released a photo of a handgun they say Brownlee had when he was arrested on Oct. 15, but they have not disclosed information that it was the gun used in the three homicides.

Record reporter Aaron Leathley covers public safety. She can be reached at [email protected] or on Twitter @LeathleyAaron. Support local news, subscribe to The Stockton Record at https://www.recordnet.com/subscribenow.

Sacramento’s 50th Murder of 2022: Dangerous Times in the Capitol City