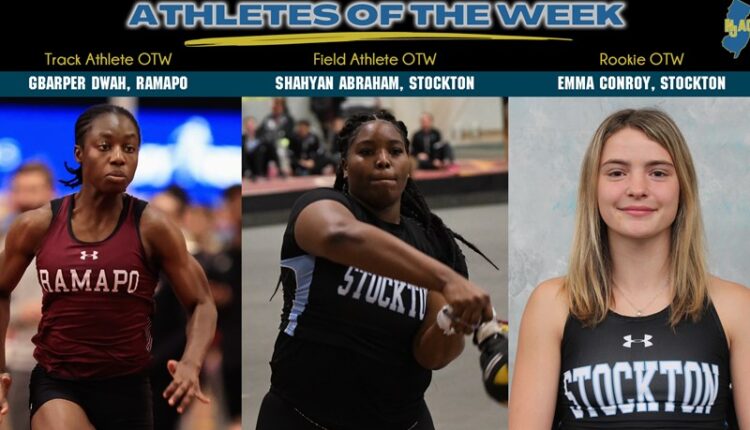 TRACK ATHLETE OF THE WEEK

Dwah earns her second and Ramapo’s third NJAC Track Athlete of the Week honor after leading the Roadrunners at the Lions Indoor Invitational hosted by TCNJ. Dwah ran both the 60 meter and 200 meter dashes, posting top-20 national times in both events. She clocked a 7.75 in the 60m, where she currently owns the top time in NCAA Division III. She ran a 25.84 in the 200m, which ranks third in NCAA Metro Region and 17th in the nation this year.

FIELD ATHLETE OF THE WEEK

Abraham collects her second NJAC Field Athlete of the Week honor of the season after a record-setting outing at the Lions Indoor Invitational. She set a new school record in the weight throw, tossing 17.15 meters to place second only to a Division I competitor. The record bettered the previous 12-year-old mark by over half a meter. She currently ranks first in the Metro Region by almost four feet and is sixth among all NCAA Division III throwers. Abraham also competed in the shot put, where she threw for 12.73 meters. She also ranks first in the NJAC in the shot put.

ROOKIE OF THE WEEK

Conroy picks up NJAC Rookie of the Week honors after a strong performance at the Lions Indoor Invitational. She ran a personal best time of 1:00.69 in the 400m, ranking fourth in the Metro Region, top 50 nationally, and best among freshman in the NJAC. The rookie placed 11th out of 40 runners and was second out of 17 Division III runners in the race. They also ran a leg on the 4x400m relay team that ran their fastest time of the season (4:12.09).

Will Your Smartphone Be the Next Doctor’s Office?