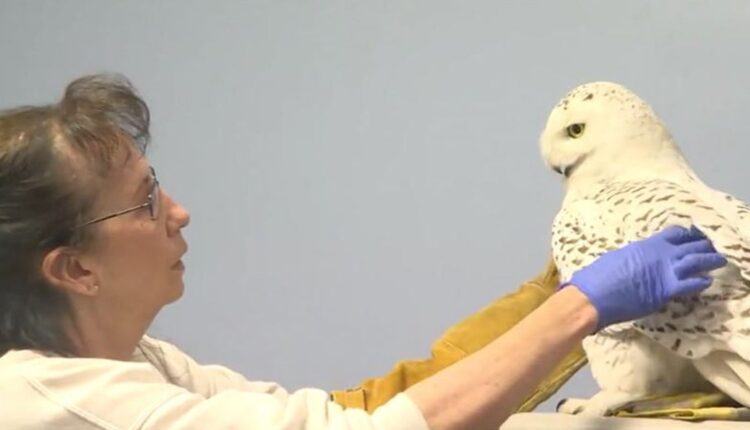 STOCKTON, Kan. (KWCH) – The subject of a historic sighting in Western Kansas is getting continued care about two-and-a-half hours from where the discovery happened. Over the weekend, there was confirmation of a snowy owl spotted for the first time on record in Lane County.

A game warden from the area found the owl injured and rescued the bird. The warden then reached out to a professional wildlife caretaker for assistance. At a rehab facility in Stockton, Carrie Newell is leading the effort to get the owl back to full strength.

Newell, the owner of Carrie’s Rehab Critters, has been rehabilitating animals for nearly three decades.

“Been doing it for almost 29 years, and got certified through (the) National Wildlife Rehabilitation Council,” she said. “And that was back in 2000, actually.”

“Just six actually, and only two did well,” Newell said.

But when she received the call about the snowy owl found injured in Lane County, she was ready to jump at the opportunity to add another success story to her list.

“It was Monday, the 16th they brought him. The officer called me. And they just caught it, and they said, ‘I’m driving two-and-a-half hours to get up to you,’” Newell said.

Newell and her team used that time to prepare for the owl’s arrival, making sure it immediately began getting the help it needed.

“I do the body check and like this one, he was emaciated. The weight told me he was emaciated,” she said of the bird unexpectedly found in Lane County. “You can’t go too fast because they already start getting damage to their organs when they are emaciated and dehydrated. So, we have to do it at a certain pace.”

Within a week, the injured snowy owl is looking better already, Newell said.

He’s more physical and he’s also letting me know he’s not happy,” she said. “He’s biting on my gloves when I have to clean things.”

Even though treating the snowy owl strays from the norm for Newell, she said is happy to play a role in helping to eventually get the bird back to his home.

“Oh my gosh, this is just a passion I have,” she said. “And I try to respect all animals, no matter what they are, but when you get these special ones, how do you to work even harder?”

Once the snowy owl is back to full health, he’ll be transported to the Minnesota Zoo where staff will be able to help him back into his natural habitat, in Canada.