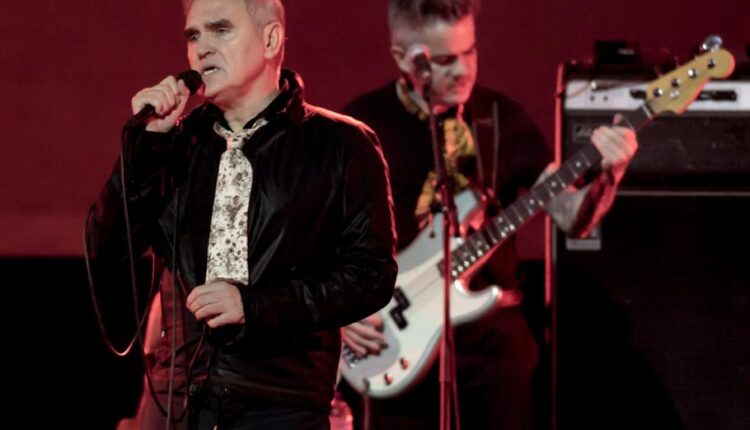 One of the more polarizing artists of the last few decades took the stage at Stockton’s Globe theater on Friday evening. Steven Patrick Morrissey, 63-year-old former frontman of Eighties indie legends The Smiths, has been a successful – although often controversial – solo artist for thirty-five years and he succeeded in putting on a show that delighted his adoring followers.

The show had sold out within hours of being announced so the queues outside the venue were long as devotees got there early to ensure a place near the stage. From such a vantage point they might be close enough to have a droll comment thrown their way, receive a spot of eye contact or, thrill of thrills, achieve a fleeting touch of fingers from their hero. As it happened, one lucky fan even had an album signed between songs.

Although currently unsigned Morrissey does have a new album entitled ‘Bonfire of Teenagers’ ready for release but… not just yet. It will be released by whoever bids the most for it. Of course, several of the songs on the album were featured during the show.

Throughout the performance the singer’s heroes and influences loomed large on a multitude of stage backdrops behind him. George Best, Frank Sinatra, David Bowie, the New York Dolls, Oscar Wilde and even Coronation Street actresses Doris Speed ​​and Pat Phoenix were all featured.

From the glorious opening number ‘How Soon Is Now?’, Morrissey did not put a foot wrong. Stalking around the stage whipping his mic chord around him in dramatic fashion he delivered a set that had something for everyone. There were feisty versions of Smith’s favorites ‘Frankly, Mr Shankly’, ‘Half A Person’, ‘Never Had No One Ever’ and an utterly sublime ‘Please, Please, Please Let Me Get What I Want’.

The new songs including ‘I Am Veronica’ and ‘Rebels Without Applause’ hit the spot although time will judge if they’ll match the revered status of older material. The singer’s waspish wit was on fine display during ‘Sure Enough, The Telephone Rings’ – “Sure enough, the telephone rings / Who wants my money now? / Otherwise the telephone would never ring”.

The title track ‘Bonfire of Teenagers’ which deals with the Manchester Arena bombing was performed under stark red lighting. The piano led ballad sees Morrisey take to task the “Silly people” who sang “Don’t Look Back in Anger” as he told us “I can assure you I will look back in anger ’til the day I die.”

Morrissey also gave us prime back catalog material too including ‘Everyday Is Like Sunday’, ‘We Hate It When Our Friends Become Successful’ and ‘Jack The Ripper’. The highlight however was back-to-back incendiary versions of ‘First Of The Gang To Die’, performed in front of a backdrop of George Best wearing an ‘I Love Morrissey’ t-shirt and ‘Irish Blood, English Heart’. A special mention too for ‘My Hurling Days Are Done’, his gloriously sad reflection on aging, “Time will send you an invoice / And you pay with your strength and your legs and your sight and your voice.”

The encore, ‘Sweet and Tender Hooligan, with Morrissey changed into a Roxy Music t-shirt was almost febrile, the crowd delirious as the singer tore off his shirt and tossed it into the mob where it was fought over and no doubt ceremoniously ripped apart for souvenirs.

The move away from cavernous arenas into smaller, more intimate theaters for this tour has suited both artist and audience bringing them closer and highlighting the unique, almost religious, relationship he has with his fans. Certainly, in Stockton, you will have to search long and hard to find anyone who left the Globe disappointed.