Rhys Hoskins | From Sacramento State to the World Series 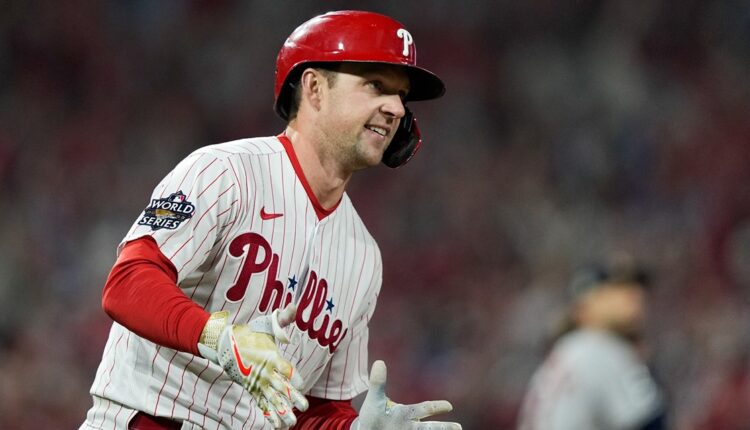 SACRAMENTO, Calif. — Most little leagues one day dream of making a major league roster and ultimately playing in the World Series. For Sacramento’s Rhy Hoskins, he’s living that dream and then some.

If you’ve been paying attention to the Major League Baseball playoffs, chances are you’ve heard his name. Hoskins has been on a tear throughout the postseason and has helped the Philadelphia Phillies to the World Series along the way.

Long before Hoskins was hitting postseason homers for the Phillies, he was a young kid growing up in Sacramento, who attended Jesuit High School in Carmichael, before taking his talents to Sacramento State University. His former collegiate coach always knew he was destined for greatness.

“His freshmen year, he was Freshmen All-American for us,” said Reggie Christiansen, current head coach of Sacramento State baseball and former coach of Hoskins. “You certainly knew that he was an exceptional young talent. It’s been a lot of fun to watch, and for him to be playing in the World Series is certainly exciting for him and his family and for our program as well.”

Oddly enough, Hoskins was not heavily recruited coming out of high school.

“(He) was kind of a hidden gem to be honest with you,” Christiansen said. “Saw him play. Fell in love with how he played, and really, we were the only school to offer him a scholarship.”

Hoskins is not the only person with Sacramento ties playing in the Fall Classic. Dusty Baker, who attended Del Campo High School in Fair Oaks, is the manager of the Houston Astros. Also, Mauricio Dubon, who attend Capital Christian High School, is currently a back up shortstop for the Astros. Coach Christiansen has a relationship with Dubon as well.

“I coached him when he was 15 years old one summer. Cool for me to see people on the field competing that I actually know,” Coach Christiansen said.

While Hoskins has made quite the impact on the field, he’s an even better person off of it.

“He’s just very humble. He’s representing Sacramento as a whole, the university, in such a great way,” Christiansen said. “He’s just a humble leader, and it’s very cool to see him live out his childhood dream.”