Rico Altamirano, who Stockton police shot, killed, was a veteran 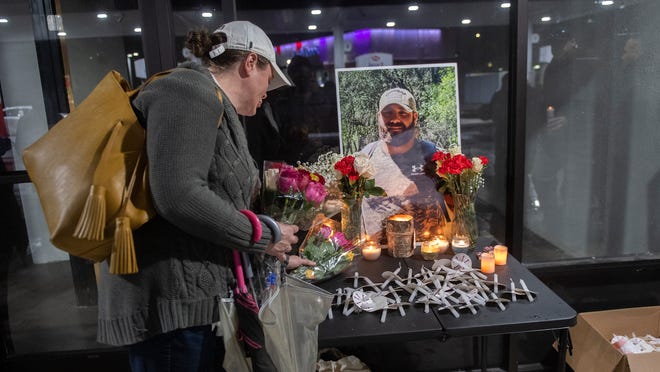 In 2012, Rico Altamirano and Tyler Baxter were on a mission searching for roadside bombs in southern Afghanistan. The two Army combat engineers were friends and bunkmates, Baxter said.

And they weren’t speaking.

The men had deployed together after first meeting at training in Kansas, Baxter said.

“(Altamirano) was just the most interesting, unique guy I ever met,” he said. “I wanted to earn his respect.”

But after six months of bunking together in a tiny room, the friends had grown sick of each other. They had fought, and boots—and fists—were thrown, Baxter said. Neither would budget.

At one point during the mission, Altamirano was on foot in an area where a roadside bomb had just exploded, and apparently couldn’t see or hear an approaching platoon, Baxter said. Desperate to catch his friend’s attention before another potential blast, Baxter threw a water bottle at Altamirano and signaled to get back in the vehicle.

“An IED blew up where he would have been,” said Baxter, who spoke to The Record by phone from his hometown of Beebe, Arkansas. Later that day, Altamirano walked up to Baxter, “gives me this pissed-off looking face, and he goes, ‘Thanks, brother.'”

Bearded and tattooed, Altamirano had a tough exterior, especially after returning to Stockton from Afghanistan, friends and family said. But several people also described him as “a gentle giant” and “a teddy bear.”

He was “protective, and loyal, and fierce,” Baxter said.

Altamirano died the morning of Tuesday, Jan. 10 after being shot by Stockton police near West Hammer Lane and Interstate 5, according to a police spokesman. hey what 33

At 4:17 am that day, police said, someone called to report that a man was threatening him with a gun near the Hammer Landing shopping center.

The man who police now believe was Altamirano, also called the police and told them he had a gun, officials said. Altamirano also told an employee at a nearby shop he was going to take him hostage, police said.

His death after a police encounter was ruled by an accident. His parents want answers

Officers found Altamirano at Hammer Landing holding a handgun and wearing a bulletproof vest, police said. At one point, Altamirano took off the vest and “told officers to take his life,” according to a police statement.

“When our officers … see a subject armed, obviously we want that suspect to put down the firearm so that we can have a peaceful resolution,” Stockton Police spokesman Officer Joseph Silva said.

“Our officers were actively negotiating with the suspect to make sure that happened.”

Altamirano then allegedly pointed the gun at a passerby in a vehicle, police said. That’s when five officers shot him, police said.

No officers or citizens were harmed, police said. Stockton police as well as the San Joaquin County District Attorney’s office and the California Department of Justice are investigating the incident.

Altamirano struggled with his mental health, including with PTSD from the war, his wife, Samantha Lopez-Altamirano, said. The two were married in July 2022.

The Sunday before, they had argued, and Altamirano left home to stay at the Budget Inn and Suites across from Hammer Landing, she said.

That night, Altamirano was hospitalized after he suffered a head injury and cracked ribs in a barfight, his wife said. She did not hear from him, except in a brief phone call early on Tuesday, in which he sounded “confused,” Lopez-Altamirano said.

“I knew Rico, and he had his struggles. And I saved him many a night, and not just in Afghanistan,” Baxter said.

In addition to PTSD, Altamirano also had a traumatic brain injury he suffered in combat, Lopez-Altamirano said. He often attended therapy through the Department of Veterans Affairs, but recently had trouble accessing it, she said.

“It’s got to be a wake-up call for (the police), and for the veterans’ system,” Altamirano’s mother-in-law, Kim Beecher, said.

After being discharged from the Army with several medals, Altamirano worked as a welder, a personal trainer and a bail enforcement agent, his wife said.

“He goes 100 percent into whatever he does,” said Lance Pimentel, Altamirano’s friend and former colleague at BoxFit Elite in Stockton.

Friends described Altamirano as a dedicated friend and mentor.

“He was always my first phone call when something happened,” said Jacob Bruce, a trainer at BoxFit Elite and Altamirano’s friend of more than a decade. “I saw him as a brother. It was something that I cherished, our friendship.”

When Lopez-Altamirano received a cancer diagnosis in February, Altamirano supported her, she said.

After one biopsy, “Rico stood up and said, ‘the cancer hasn’t seen these fighting fists,'” Lopez-Altamirano said, mimicking how Altamirano had punched the air. “And he just held me.”

Altamirano enjoyed playing guitar and singing country songs. “Any time I was sad, he would play for me,” she said.

Bruce said his favorite memory of Altamirano was at the beach, when Altamirano taught Bruce’s daughter to boogie board.

“He was always just the life of the party,” Bruce said. “I have this video … you just see him with his huge beard in the water, and a wave just takes him out … he was a kid at heart.”

In addition to Lopez-Altamirano, Altamirano is survived by two children, two stepchildren, his former spouse, his parents, and his friends.

Record reporter Aaron Leathley covers public safety. She can be reached at [email protected] or on Twitter @LeathleyAaron. Support local news, subscribe to The Stockton Record at https://www.recordnet.com/subscribenow.

How much has it rained in Sacramento, San Francisco, Los Angeles since the storms started?