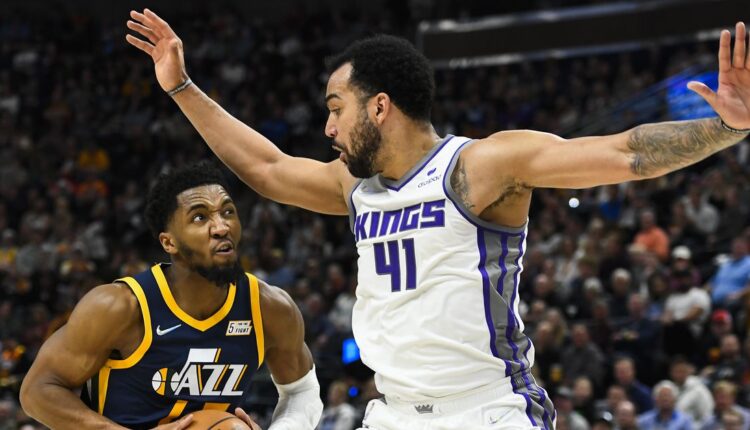 The Sacramento Kings have “expressed interest” in Utah Jazz star Donovan Mitchell, according to Shams Charania of The Athletic.

In Shams’ report focusing on the Celtics reportedly offering Jaylen Brown in a deal for Kevin Durant, he listed the Kings among seven other teams, headlined by the New York Knicks, who have been connected to Mitchell for a while.

“Along with New York, several other teams have expressed interest in the Jazz when it comes to Mitchell, such as Washington, Miami, Toronto, Charlotte, Sacramento and Atlanta, according to sources.”

It’s unclear what Sacramento would have to offer to get a deal done, but given Danny Ainge’s propensity for asking for the moon, it’s hard to see how Sacramento could put together a competitive package without Keegan Murray being involved.

After trading a protected 2024 first-round pick for Kevin Huerter, Sacramento is a bit limited in what kind of package of picks it could offer.

From a salary-matching purpose and a general roster perspective, De’Aaron Fox would probably have to be heading out to Utah or a third team. Given Mitchell’s resume stronger than Fox, Sacramento would likely have to send at least one extra asset, if not more, to put together an offer Utah would consider.

Mitchell would quickly slot in as Sacramento’s No. 1 guy if he came in a trade, bringing an elite change of pace and multilevel scoring off the dribble.

One thing to consider in any trade is whether Mitchell would even be happy in Sacramento or consider re-signing at the end of his current contract. Mitchell is making around $32 million per season over the next three years in his contract, with a player option in year four.

It’s clear that general manager Monte McNair is star hunting, but it’s hard to see how any deal for Spida gets done unless Sacramento is willing to send Fox, Murray and perhaps even more.

What Church Locked Out of Fresno-Owned Tower Theater? What City Says – GV Wire