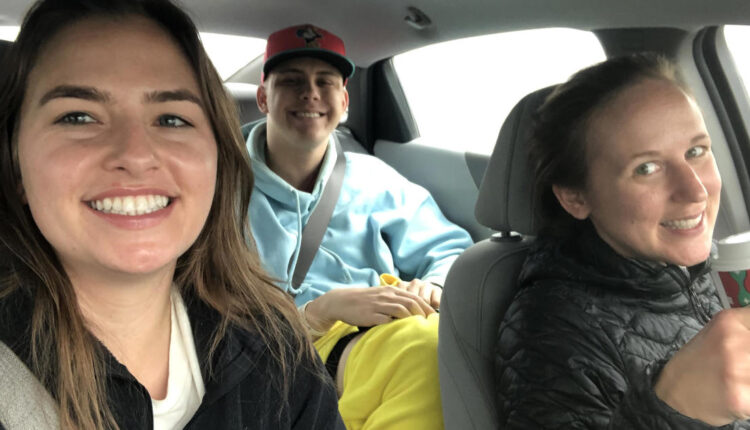 Nationwide, thousands hoping to see their families Christmas weekend instead spent the holiday in the airport. It comes as a massive, deadly winter storm continues to wreak havoc on air travel.

On Monday alone, over 8,000 flights have been delayed and nearly 4,000 canceled according to Flight Aware.

Twenty-five-year-old Titus Converse was among the masses, trying to get home for Christmas on Friday, Dec. 23. Instead, he found himself stranded in the Phoenix airport as his flight to Sacramento was canceled.

“There’s nothing on the website that says there is any available flight; everything is not looking good,” Converse said.

He was not alone. The lines of people trying to rebook their canceled flights grew by the hundreds late Friday night in Phoenix.

“The line felt like Disneyland without the fun,” he said.

But a chance encounter in that not-so-merry line is where Converse’s Christmas adventure home would begin.

“It feels like we’re in a movie,” Converse said.

He struck up a conversation with two strangers on the Southwest Airlines customer service line.

Becky Stroble and Tori Sahli, two friends headed home for Christmas from a vacation in Mexico, just so happened to also be Sacramento-bound.

“And it’s like, what if we just drove?” Converse said of their newly announced plan.

So Stroble and Sahli took a chance on Titus, a stranger who told them had “just the right amount of goof” to not set off their stranger-danger internal alarms.

The trio ditched the airport and loaded up in a rental car together, ready for a 12-hour drive home. They knew if they drove through the night, they would at least make it home for Christmas Eve.

“It’s such a silly life we ​​are living, I cannot believe this is actually happening,” Converse said with a laugh.

They took turns driving straight through the night, getting to know each other along the way.

“In today’s day and age you don’t see strangers helping strangers too much,” said Converse.

But it’s that generosity that Converse credits to making it home to see his family on the 24th, able to carry on holiday traditions like Christmas Eve lunch at Denny’s with his grandparents, church service that night, and fresh-baked cinnamon rolls Christmas morning.

He admits the little things are a bit sweeter this year.