Sacramento County figuring out plans for $150.7M in COVID funding 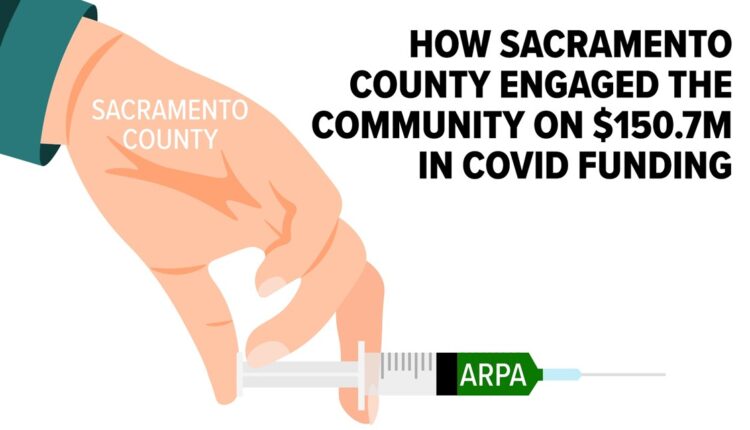 Leaders of two community organizations in Sacramento say equity was largely absent from the last batch of COVID funding, but the county says it was front of mind.

SACRAMENTO COUNTY, Calif. — Sacramento County officials are set to spend the last half of $301.4 million in American Rescue Plan Act (ARPA) funding when the Board of Supervisors finalizes its list of project recommendations first greenlit on July 13.

The $150.7 million in COVID-19 recovery funds released to the county in June are distinct from the CARES Act funds of 2020, according to Sacramento County Executive spokesperson Kim Nava.

“There were two very different functionalities for each one of those federal funding sources. They were both to address COVID — CARES was response and APRA was recovery,” she said.

With a focus on pandemic recovery, among the largest areas of response currently under consideration by Sacramento County Supervisors include:

As plans for the $150.7 million in funding distributions are being finalized by Sacramento County officials, community advocates like Kula Koeing of Social Justice PolitiCorps say residents and other advocacy organizations were mostly kept out of the decision-making process.

She said she was already skeptical of the process after more than half of the county’s CARES funds went to the Sheriff’s Office in 2020, and after reading a recent Grand Jury report alleging county officials neglected the public health department early in the pandemic.

Now that she’s seen some of the ARPA funding proposals, like $5 million per district in direct allocations to county supervisors, she said proposals geared toward economic and social equity are still missing.

“They’re just not going to have a framework that’s based in equity and think about how these funds could be used to really transform the lives of the most vulnerable Sacramentans,” she told ABC10. “They’re just going to divvy it up to their own pet projects and organizations.”

Public outreach on the funds from county officials was launched in June 2021 with a Community Needs Survey:

“We wanted to make sure that we reached people whose first language wasn’t just English,” Nava said. “What those surveys told us was that housing and homelessness were the #1 priority (for county residents).”

Koeing, however, said surveys and public comment opportunities were not enough to get the community involved in the fund allocation process.

“There’s only so many times I can tell the board of supervisors to do better,” she said. “It just falls on deaf ears at this point.”

Leaders from other Sacramento social justice organizations like Public Health Advocates, who share Koeing’s concerns, came out to recent Board of Supervisors meetings to express their disappointment with the funding allocation process.

The two advocacy organizations rallied together at a June 14 Board of Supervisors meeting when the county announced receiving its $150.7 million in ARPA funds.

Yesterday @WearePHA & @justice_sac held an inspiring day of action at the Sacramento County Board of Supervisors’ meeting. We called on the supervisors to use the county’s American Rescue Plan Act (ARPA) pandemic recovery funds more equitably. (1/5) pic.twitter.com/zgD9T8a9y9

Director of California COVID Justice for Public Health Advocates, April Jean, said they met for public comment to directly express their disappointment with the county supervisors over the current funding proposals.

She called on the county supervisors to give “trusted, culturally-informed” community-based organizations $20 million in ARPA funds to provide need-based services for their communities.

Standing beside her was the Unitarian Universalist Society of Sacramento Rev. Lucy Bunch.

“I’m really here this morning to ask you to apply a moral calculus, a moral courage to the decisions you have to make,” Bunch told the supervisors on June 14. “Put the money where the pain is.”

Jean said she followed up with District 1 Supervisor Phil Serna after the meeting, and he agreed to pledge $2 million of his $5 million in direct-to-district funding toward her vision for community-based services.

While it’s far from the $20 million she and other advocates requested, she said Serna’s willingness to listen and engage with her after her June 14 public comment is an important win for equity in Sacramento County.

In comparing the county’s focus on equity with other large California counties, Koeing said Los Angeles’ APRA Equity Dashboard provides a level of transparency and accountability she’d like to see in Sacramento.

“I think it has to do with who’s on the board (of supervisors). I don’t see a willingness from any board member, unfortunately, to say ‘Hey let’s really stop and have a framework that’s based in equity for how we spend this money,’” she said.

But Nava said the $5 million set aside for direct-to-community investment is one example of how the county carried out equity in its funding framework.

Projects will be scoped out by county staff, then set on the Board of Supervisors’ meeting agenda as a recommendation for their consideration.

She said the inclusion of community organizations in scoping out projects before they end up on the agenda is done by individual departments.

“Our staff work hand-in-hand with (community-based organizations) not just on ARPA, but on getting the word out about county programs and services that extend beyond ARPA funding,” Nava said. “So they’re really dialed into our area stakeholders—and include them in those discussions.”

Things About To Get (Even) Busier