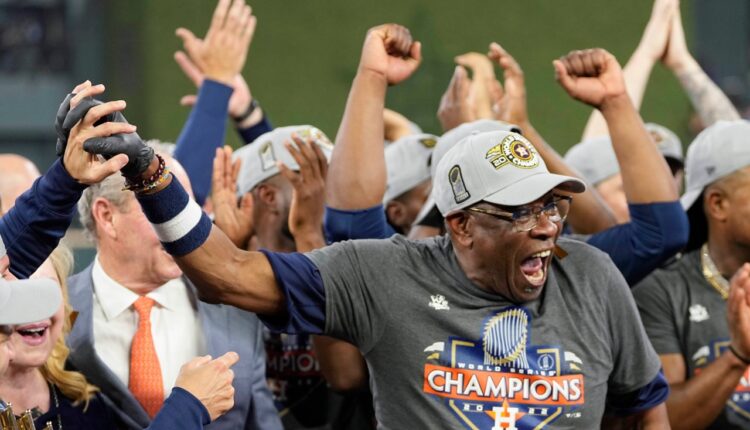 After Baker won his World Series championship as a Major League Baseball manager on Saturday, Sacramento Mayor Darrell Steinberg declared ‘Dusty Baker Day’ in the city to honor the Houston Astros manager that has Sacramento ties.

“We’ll make it official sometime very soon,” Steinberg tweeted on Saturday night. “Dusty is a great Sacramentan. So happy for him!”

Baker won his first World Series after the Astros defeated the Philadelphia Phillies 4-1 at Minute Maid Park on Saturday. The Astros won the series six games after outfielder Kyle Tucker recorded the final out on flyball in foul territory.

At 73 years old, Baker became the oldest manager to win the World Series.

It was Baker’s second consecutive appearance in the Fall Classic with the Astros and his third overall. Prior to Saturday, Baker won the most games in the Major Leagues before winning a championship. Baker has won 2,093 games throughout his 25-year managerial career in the majors, according to Baseball Reference.

“I’m so happy. I’m just thinking about my mom who passed in January and my dad and Hank Aaron last year and all the guys that help mold and make me the man that I am,” Baker said on the FOX Sports postgame show following the Astros’ series – clinching victory.

Baker was born in Riverside and moved to Sacramento as a teenager. He went on to become a standout athlete at Del Campo High School in Fair Oaks and was later inducted into the Sac-Joaquin Section Hall of Fame in 2010.

The newly crowned World Series champion still has ties to the Sacramento area, as his winery Baker Family Wines is located in West Sacramento.

Baker’s first World Series appearance as manager came with the San Francisco Giants in 2002. He came close to winning that year with the Giants holding a 3-2 series lead, but the then-Anaheim Angels came back to win the series in seven games.

Baker’s Astros lost in the Fall Classic in 2021, falling in six games to the Atlanta Braves.

After getting down 2-1 in this year’s World Series, the Astros tied the series in Game Four with a combined no-hitter, the second in the series’ history. The Astros took a 3-2 series with a 3-2 victory in Game Five.

In Game Six, the Phillies were leading 1-0 until Yordan Alvarez of the Astros gave the Astros the lead on a three-run homer that went 450 feet.