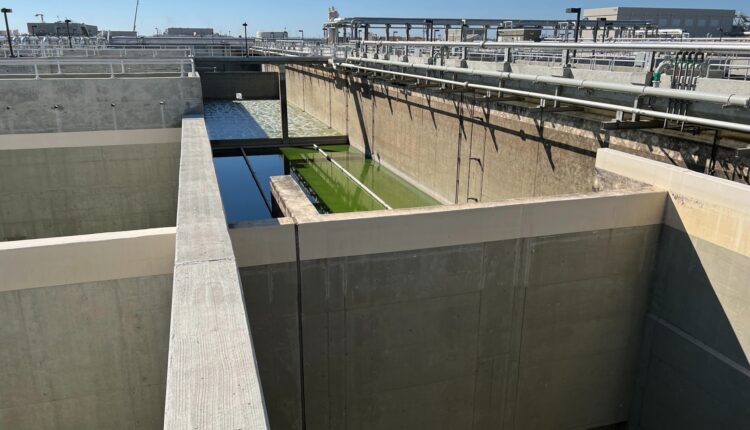 One of the largest public works projects in Sacramento’s history has been quietly under construction, out of sight for most people in the region.

Sacramento RegionalSan is upgrading its wastewater processing facility in Elk Grove, which processes wastewater from customers across Sacramento County, and West Sacramento in Yolo County. On an average day, 150 million gallons of wastewater is handled at the facility.

The updated facility, called EchoWater, will be focused on recycling more wastewater. RegionalSan officials say that new infrastructure will be able to clean sewage so thoroughly it can be used to irrigate agricultural crops.

Portions of the project are expected to go online later this month. When EchoWater is complete, it will be the second largest facility of its kind in the United States.

CapRadio’s Randol White took a tour of the EchoWater facility in Elk Grove and sat down with Sacramento Area Sewer District General Manager Christoph Dobsonwho explained how the project works.

This interview has been edited for length and clarity.

Tell us about the EchoWater facility.

EchoWater is the project that we’ve been building. It’s an upgrade that came out of some regulatory requirements that we had back in 2010, and it’s about a $1.7 billion project to upgrade our treatment plan.

It removes ammonia from our wastewater and then also filters the water to a very high degree. That water is going to be so clean that we can use it to water food crops.

The cities throughout the Sacramento region all used to treat their own water, and then at one point, everything got funneled to here.

Yeah, there used to be 22 smaller plants spread around the region and they discharged primarily to the American River and those were all taken offline. We centralized and built this big plant here near Elk Grove.

Where is the furthest place wastewater travels from?

Probably somewhere up in Folsom would be the furthest point. And it takes about a day for the wastewater to get from Folsom down here.

For someone in Elk Grove?

It might just be a handful, just a few hours.

And most of that is pushed through the system naturally, through gravity?

Yeah, most of our system just uses gravity to flow downhill. But eventually it gets to a point that’s maybe very deep under the ground and we have to lift it up, so we use a pump station to do that and it pressurizes the wastewater, pushes it to a place where gravity can then take over again.

This is a really large property. How many acres are we talking about?

And a big chunk of that looks like open space. What is that land used for?

Right, so we have about 1,000 acres of process area, and about 2,000 acres of buffer lands. That area is just really a natural wildlife preserve.

We have staff that actively manage that property and its primary purpose is obviously to make a home for the flora and fauna, but it’s also so that we can be good neighbors to the surrounding communities. It cuts down on the noise and the dust and the odors that come from operating a treatment plant.

Your team gave me a tour of the facility and one thing I noticed is that it really didn’t smell that bad. How do you keep a handle on that?

Odor complaints are a very important part of our job. We try to obviously limit those, and we do that by having covered processes, for one thing. And then we have odor removal equipment that is specifically designed to remove those odors. So it smells pretty darn good here at the wastewater treatment plant.

Do you ever think, ‘I just wish people realized how much is going on behind the scenes?’

surah I mean, we recognize we’ve been in this business for a long time and understand that people don’t see it, so they don’t necessarily think about it. But that doesn’t mean it’s not important. And it’s very important infrastructure underground. And then also our treatment plant site is kind of tucked out of the way as well. And it has buffer lands around that plant. So a lot of people don’t see that either. But obviously it’s very important if you flush your toilet.

Much of the water that is treated ends up in the Sacramento River, correct?

Yes, that’s where our discharge point is.

And then some of the water that’s treated ends up in what’s called a purple pipe system, which helps water some of the parks in Elk Grove.

yes So the purple pipe system is recycled water. We treat that to a very high degree. And then that water is safe to be used, currently it’s used for ballfields, medians and some parks.

How much of that purple pipe water is produced? Is there capacity to water parks throughout Sacramento?

Let’s talk about another RegionalSan project, the Harvest Project, which promises to deliver recycled water to farmers in southern Sacramento County. How will that work?

We will be building a large transmission line and a pump station to pump the recycled water south. And that water will be used by the farmers to water their crops. In exchange, farmers want to significantly reduce pumping groundwater. And that’s the big benefit, is that it allows the groundwater to recover.

You have a lot of inflow that’s coming in from throughout the region with some 1.6 million customers. What is the biggest headache for you here when it comes to stuff that’s coming into these pipes from people’s homes?

Anything that you’re not supposed to flush down the toilet. One is wipes, they’re sometimes called flushable but they’re really not, because they are almost indestructible and they clog up pumps and other systems.

We also want customers to not discharge fats, oils or grease into their system, because if you put that down the drain it will solidify and clog up either their sewer or our portion of the sewer, and that’ll cause sewer overflows.

We also ask people not to flush any medications down the drain because that’s also something that isn’t well-treated at our plant.

Throughout the different stages of the treatment process, water is sampled and then goes to a lab that you have here on site. How many different tests are done annually?

We do about 90,000 tests annually, and those tests are for compliance with our regulated requirements. They’re also to help our plant make sure that the process is working right, and that’s the bulk of the tests.

And you do send things out to other labs when it comes to testing for pathogens that are in water that might cause things like COVID-19 or Monkeypox. How does that process work?

So, first of all, some pathogens we do test for here, but in particular, there’s a science called wastewater-based epidemiology, and that’s where you take the wastewater, sample it and send it off to the lab.

We work with Stanford and also with a private company called Bio. They take those samples and they test for specific diseases like COVID, and they can get a sense of the concentration in the wastewater and that can tell you whether the cases may be going up or down. So you can see trends from that.

How accurate has sampling been when it comes to tracking COVID?

It’s accurate, not on an individual basis, but on an overall sense. We get a good sense of the trend.

Yes, it’s our wastewater professionals appreciation week. So everyone who’s listening right now, when you use the facilities at some point today, keep that in mind, that there are people who are hard at work making sure that all of this sewage throughout the region passes through and then into the river in a really clean and ecological fashion.

If You’re Worried About the Environment, Consider Being Composted When You Die