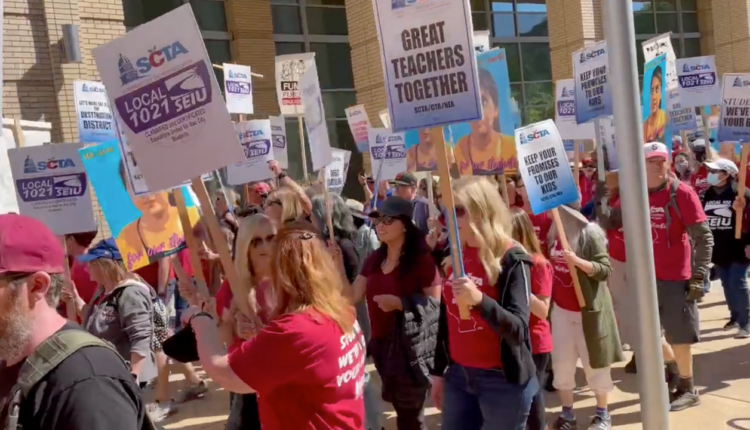 In the aftermath of the Sacramento teachers and school employees strike, major austerity measures are being implemented in the Sacramento City Unified School District (SCUSD) at the discretion of the Sacramento County Board of Education (SCOE). The latest austerity measures include the layoff of 106 school employees in the district and looming cuts due to a $16 million budget deficit. The district has also unilaterally extended the 2022-2023 and 2023-2024 school years to make up for funds lost during the strike.

These attacks come one month after two unions, Sacramento City Teachers Association (SCTA) and Service Employees International Union, Local 1071 (SEIU) imposed a sharp reduction in educators’ living standards by imposing pay “raises” of 4 percent, less than half the current inflation rate of 8.5 percent. Union members suffered the brutal denial of strike pay during their eight-day strike, a tactic meant to exacerbate their economic hardship and weaken their resolve to oppose the sellout agreement. The refusal of strike pay was not because of lack of money, but represented a conscious decision to undermine the strike by the leaders of California Teachers Association (CTA), who sit on a $358 million strike fund.

The unions made a late weekend pact with the district to impose a betrayal and rushed to send teachers back to school the next day before they had a chance to read the tentative agreement. Lacking a rank-and-file organization independent of the pro-management CTA and SEIU, Sacramento educators were unable to mount an organized collective response to this attack, organize the rejection of the contract, and carry forward the struggle for their demands.

With the strike momentum destroyed, the unions felt that members’ resolve would be weakened enough to ratify the contract. Without reporting how many teachers voted, the SCTA claimed that the vote was 98.2 percent in favor. If this total is indeed accurate, it was a reflection not of support for the contract, but the fact that educators had no confidence that the unions would bring back anything better.

Now the district faces a $47 million penalty by the state of California for school days lost due to the strike. The SCUSD has requested that this penalty be waived by adding twice as many additional days to the next two school years, for a total of 16 additional days.

In addition to demands for adequate cost-of-living pay increases and robust health care benefits, educators were denied their critical demand for heightened COVID safety in schools. The sellout agreement made no guarantees for addressing the mass teacher shortage, and both the district and the unions fully accept the mass infection policies demanded by the Biden administration. Mirroring the current surge throughout the US, COVID cases have skyrocketed in the district over the past month as all mitigations, including mask mandates, have been thrown out. The number of cases officially reported on the district’s COVID dashboard has risen nearly five-fold in May, with 1,079 cases, up from the 238 reported cases in April.

Demands for higher wages and better COVID-19 protections are intimately tied to much-needed increased staffing. The profession has seen very high rates of attrition due to miserable pay and high levels of occupational COVID-19 exposure. On a given day this year, 25 percent of students in the district had a substitute teacher, and roughly 3,000 had no instructor at all. These teacher-less students were instead warehoused in cafeterias and other large spaces and baby-sat by administrators with no pretense of education in order to ensure the school received funds for student attendance.

Sacramento teachers and school employees have been lied to by their respective unions and were forced to accept a contract which met none of their fundamental demands. Further, in striking for better working conditions and safety from COVID, more resources to provide high quality education, and a living wage, SCUSD teachers and school workers have been scapegoated by the district for causing the present major budget deficit in the district, which in turn is being used as the justification for mass austerity in the district.

The betrayal of Sacramento educators by their union is not an isolated case. Everywhere, the teachers union isolate educators from other workers facing the same struggles, limit the strikes to one locale, hold one-day protest strikes and declare salary cuts as “victories.” In Brookline, Massachusetts, after a one day strike, the Brookline Educators Union rammed through a tentative agreement and now accepts the layoff of almost half the district’s teachers without raising a finger. In March, the Minneapolis Federation of Teachers (MFT) strong-armed members into accepting a minuscule wage increase and the abandonment of class size caps.

In 2019, during the wave of teacher rebellions across the US, the Oakland Educators Association (OEA) stifled the strike of Oakland teachers. After pushing through a sellout agreement, the OEA accepted mass austerity imposed by the district in the form of layoffs, school closures and mergers, and other budget cuts to close a $22 million deficit. Three years later, as more layoffs and school closures have been announced, the OEA funneled teachers’ anger into a one-day protest strike to dissipate anger, with no intention of taking any real action against the assault on public education.

These outrageous sellouts flow from the union’s integration into the the Democratic Party that has led the offensive against public education and other vital social programs while voting for billions to be spent on Biden’s war machine.

While teachers’ unions praised the Democratic Party, the same politicians are behind decades of cuts to public education. Democratic President Clinton promoted charter schools with the slogan of “school choice.” George Bush’s No Child Left Behind, co-sponsored by Democratic Senator Edward Kennedy, Democratic Congressman George Miller and Republicans in 2001, continued the process of school privatization.

Charter schools were given financial support for start-up costs and facilities. In 2009, Democratic President Barack Obama initiated the Race to the Top, with a budget of $4.35 billion (just 3 percent of the 2009 military budget). This provided grants to selected schools that dropped restrictions on charter schools. Five years later, the graduation rate either dropped or remained the same in seven of the 11 states given grants.

California, after 12 years of a democratic controlled legislature, has the lowest rate of any state under conditions where education in the US is in a shambles. The national literacy rate of 79 percent is far below dozens of other countries.

The budget woes of Sacramento schools are mirrored throughout the state; 23 districts are rated as “qualified” (budget may not balance in the next three fiscal years), and four additional districts are in the same boat as Sacramento; “negative” (budget will run a deficit in the next three fiscal years). Major cities in California are already suffering massive deficits; $125 million in San Francisco, $50 million in Oakland. Sacramento cannot even afford the pitiful raises that have been accepted, and outside of the $47 million possible penalty for lost school days, they face an additional $16 million deficit.

California Governor Gavin Newsom is also on the charter school bandwagon. While sitting on a massive state budget surplus, he has overlooked the starving of public schools in a state that is home to the largest number of billionaires in the US.

The role of the National Education Association (NEA) and its affiliate union, the SCTA is crystal clear. When not pocketing members’ dues, NEA President Becky Pringle, whose wealth is estimated at $11.3 million, receives a salary of nearly $500,000. It is also worth noting that AFT President Randi Weingarten rakes in slightly more than Pringle, while the unions pour money into Democratic politicians who are waging war against their members. The NEA plans on gifting $33 million in the midterm elections to “shape debate in states about education funding, taxes and revenues.”

The NEA and its affiliates, including SCTA, have clearly shown that they are not organizations which represent the interests of teachers and school workers, but their opposite: organizations serving the interests of the Biden administration, a government of big business, which is overseeing mass Austerity of teachers and workers, attacks on public education and herd immunity policies in the schools which have led to mass infection and deaths of staff, students and families across the US.

Teachers, bus drivers, cafeteria workers and all school employees in Sacramento and beyond must draw the lessons of the recent strikes and organize rank-and-file committees, independent of the big business parties and trade unions, to wage an actual struggle against austerity and in defense of public education, and indeed their very lives.

To defend their living standards and the right to public education, Sacramento educators should initiate a rank-and-file committee to unite with other sectors of the working class facing the same austerity measures. This would include nurses at Kaiser facilities and West Coast dockworkers who are facing contract expirations and are natural allies.

Rank-and-file committees must also fight to unite nurses and teachers to protect their health against the continued threat of COVID. No other advanced country has as high a death rate as the United States. Cases are rising worldwide, and 20 percent of COVID survivors have long COVID, a suite of often debilitating symptoms, which include fatigue, “brain fog,” shortness of breath, chest pain, palpitations, dizziness, depression and anxiety.

Rank-and-file teachers and school employees should reject this, demand a re-opening of the contract and fight for the following demands:

● No layoffs or school closures!

● Full COVID protection, with measures up to and including full remote learning decided by committees of rank-and-file educators and scientists.

Receive news updates and information on the fight against the unsafe reopening of schools.