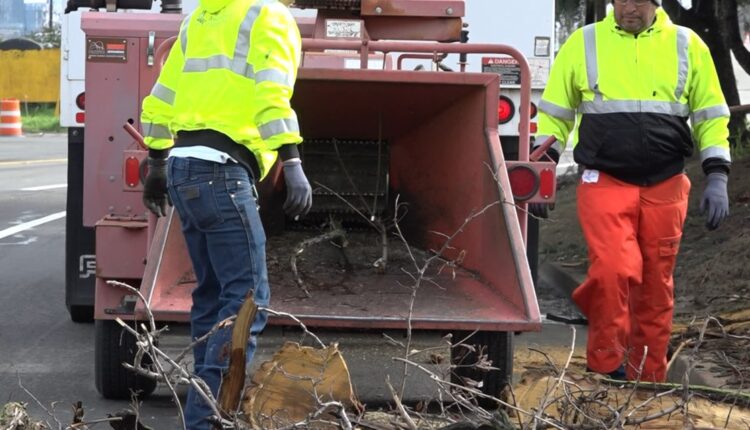 Since Dec 31 the City of Sacramento has received 25,000 calls for service and 2,800 have been about downed trees

SACRAMENTO, Calif. — Storm cleanup is underway. Cities are taking advantage of this break in the weather to clean up and prepare themselves for the next storm.

The city of West Sacramento Public Works Department was out Thursday clearing trees.

“With our trees, we’ll probably get daily calls, so it’s hard to keep up,” said William Roberts, director of public works operation maintenance on site.

Many residents impacted by storms experienced standing water; some were up to their knees in it over the weekend.

“When we receive a lot of rain, that’s called surcharge and what that means is our system can only handle so much at one time. When the rain subsides, our system actually catches up and pumps it out to the canals into the river,” said Roberts.

West Sacramento Public Works crews have been working day and night shifts for the past two weeks. They’ve received hundreds of calls for downed trees, clogged storms drains and canals not draining. They estimate it will take a few more days to complete all the work, then they’ll prepare for the next storm.

“We will go through the whole storm system looking at our storm drains, our mains, our channels, our creeks, and we also have pumping facility stations,” said Roberts.

Tree debris continues to litter the streets of Sacramento, and for resident Leon Chavez, it’s something new.

“It was a big surprise to see trees like this that have been here forever and just to see it like that on the ground across the street is pretty incredible,” said Chavez.

Meanwhile others in South Sacramento like Rosanna Cazares, they are ready for it all to be over.

“It’s just kind of frustrating to keep having to go through this, weekend after weekend, it seems like,” said Cazares.

The city of Sacramento updated their total calls to the 311 number on Thursday. Since Dec 31, they have received 25,000 calls and 2,800 have been about downed trees and urban forestry issues.

If you have an issue that requires public works in Sacramento, call 311. In West Sacramento, you can use their West Sac Connect app found here.