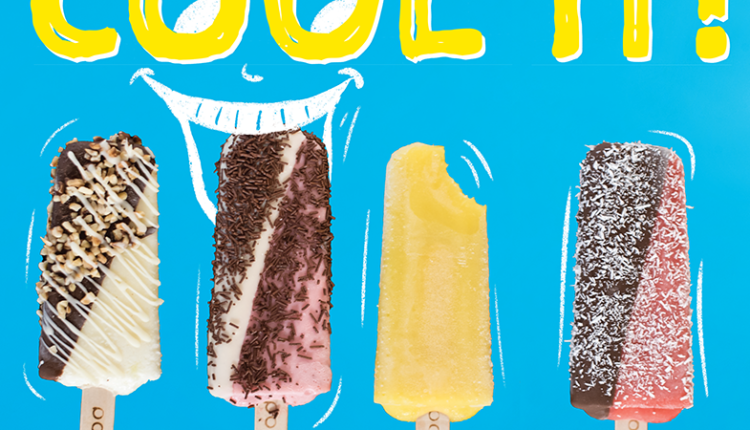 The heat is on in Sacramento, which means that the season for relishing frozen treats of all kinds is well underground. Whether you pledge allegiance to one of Sacramento’s OG shops (we’re looking at you, Gunther’s, Vic’s and Osaka-Ya) or crave newfangled flavors from ice cream pioneers like Portland-based Salt & Straw (expected to open soon in midtown’s Ice Blocks complex), this region’s got you covered. From Afghan sundaes to Mexican raspados to Korean soft serve, our roundup of Sacramento’s most enticing frozen desserts is evidence that the desire to seek sweet relief from the swelter is universal.

When it comes to high-quality Mexican-style refreshments, this place has it all. Owner Tiffany Martinez uses natural fruit juices as an ingredient whenever possible, including in her frozen fruit bars, raspados (shaved ice) and the frozen mango treats known as mangonadas, the most popular item at this colorful joint. The house-made ice creams come in traditional Mexican flavors such as horchata, guava and rose petal. “We have a lot of regulars from all cultures and nationalities come in,” says Martinez. “We know them so well that we already know what they’re going to order when they walk in.” 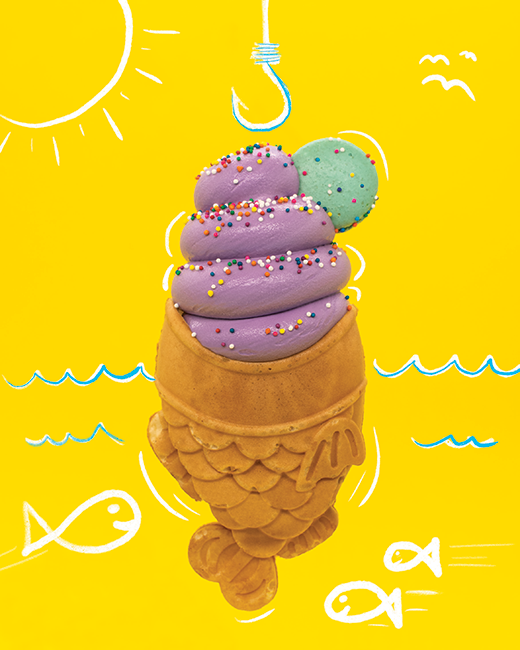 Korean-style soft serve is having a stateside moment, and with good reason. That’s because Ah-Boong—fish-shaped cone, or taiyaki, lined with your choice of a filling (think custard, nutella, red bean) then filled with soft serve (flavors include milk, matcha, ube, and black sesame)—isn ‘t just adorable, it’s also wonderfully delicious. The soft serve at SomiSomi, a Los Angeles-based chain, is intensely creamy, a perfect complement to the crunchy-chewy pasytrylike cone with Japanese origins. Expect a wait as more and more Sacramentans catch the Ah-Boong wave. 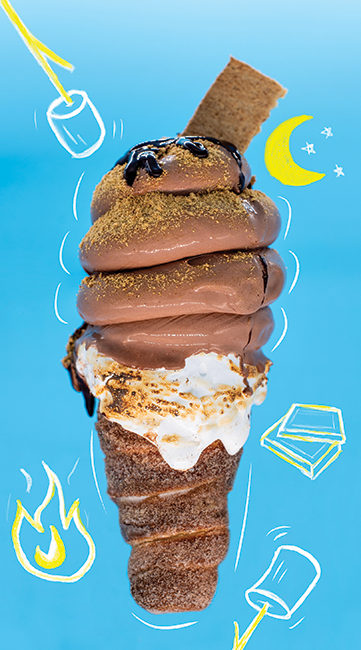 Hungarian Chminey Cakes are the must at Sweet Cones, where owner Mindy Le wraps ribbons of dough around cylinders and bakes them, creating Guggenheim-like spiraled cones that “taste like a cross between a churro and donut,” says Le. Once cooled, the interior of the cone is coated with a filling (choices include nutella, custard, peanut butter and more) and filled with soft-serve ice cream and a variety of toppings. “They’re very popular with both tourists and locals. People like them because they are unique and the cone really complements the ice cream.” 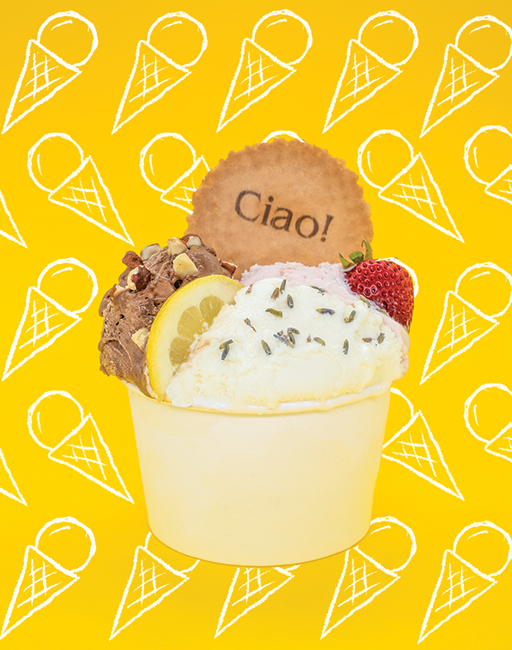 Owners Mike Janwar and Lucy Xu pride themselves on gelato that’s “handmade with love, care and good ingredients.” The couple learned the basics of gelato making from a mentor, then perfected the art through trial and error. In addition to perennial favorites like pistachio and strawberry, “we try to create flavors that we think are interesting,” says Janwar. That includes the Ferrero Rocher-inspired Mike’s Breakfast: hazelnut chocolate gelato flecked with crispy bits of wafer and nuts. 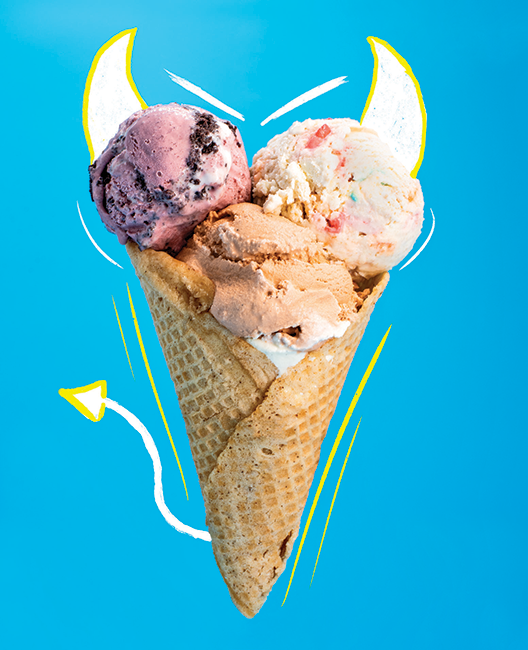 The name of this cheerful downtown shop says a lot about its approach to making top-notch ice cream in how’d-they-do-that flavors. “We don’t take ourselves too seriously,” says owner Jess Milbourn. “At the end of the day, we’re creative people who just want to make great ice cream and share it with people.” Some of the most intriguing scoops here include coffee and donuts, Thai tea and carrot cake with a cream cheese ribbon. But don’t mistake the imaginativeness for gimmickry; Devil May Care delivers on the basics, too. “We make an outstanding vanilla,” Vouches Milbourn. 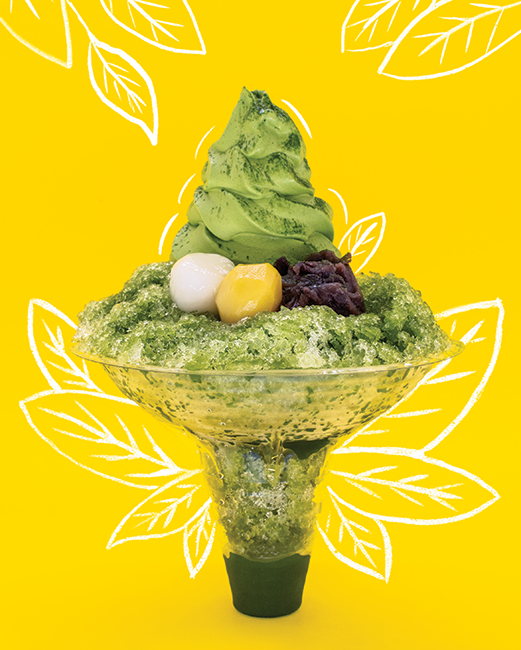 Got matcha? The trendy green powdered tea popularized in Japan is the star of this Hawaii-based chain focused on cold beverages and ice cream treats. Order matcha soft serve—on its own or swirled with another flavor—in a cone, cup or as part of a verdant float or latte. The cafe also serves frosty matcha frappes and elaboate shaved ice creations adorned with Adzuki Beans, Shiratama (a type of mochi) and condensed milk. 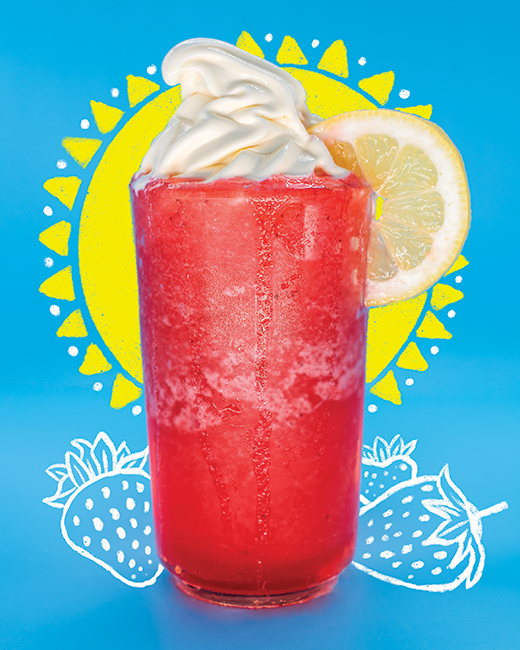 What could be more refreshing that an ice cold lemonade on a triple-digit day? Our vote goes to the Frozen Lemonade Float from Cowtown Creamery, one of Sacramento’s first dessert-centric food trucks. Owners Stephen and Graham Caldwell concocted the float by adding vanilla soft serve to their slushie-like frozen lemonade and knew immediately they had a hit on their hands. (The strawberry version has since soared in popularity.) “While our high-quality ice cream base makes a difference in the quality, the way we set our machines up is actually just as important,” explains Stephen. “We constantly service our machines to ensure the product comes out as smooth and creamy as possible.” 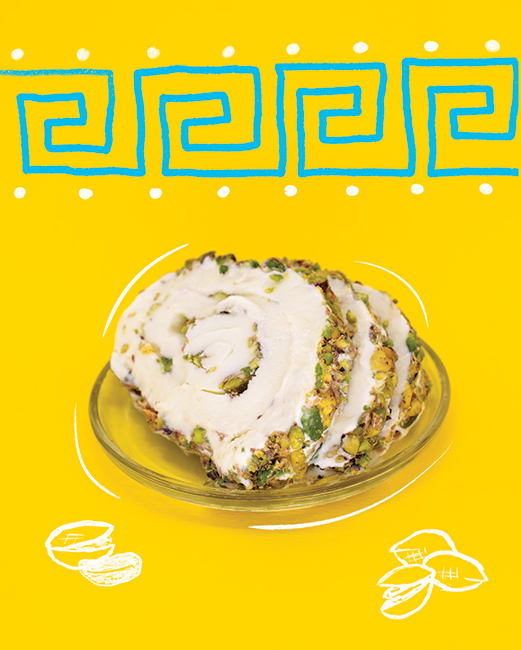 This Mediterranean sweet shop serves up gorgeous ribbons of booza—a Middle Eastern ice cream that’s been around for centuries—with edges bedazzled in bright-green crushed pistachios. Booza has a more elastic texture than typical American ice cream owing to its main ingredients, mastic gum and orchid-root flour. Devotees who enjoyed the treat as children in far-flung locales such as Syria and Lebanon now travel from the Bay Area to Sacramento to savor a taste of their youth. 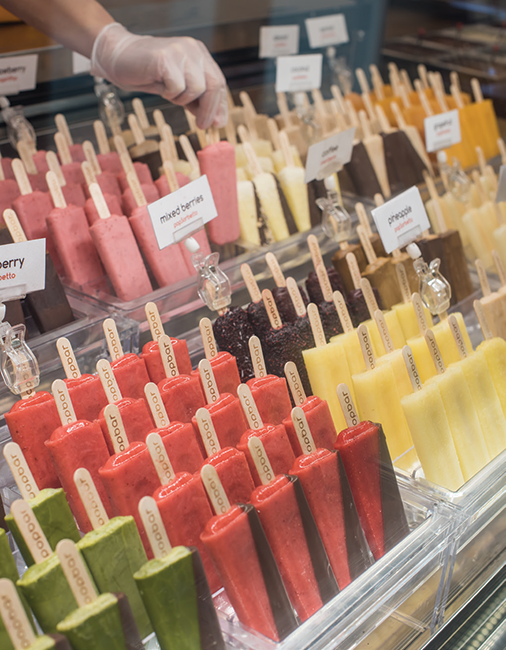 A franchise sensation that originated in New York City, Popbar specializes in picture-perfect customizable gelato, sorbet and yogurt popsicles drizzled or dipped in chocolate (dark, milk, white, caramel or mint) and decoratively rolled in your choice of toppings, from hazelnuts to rainbow sprinkles to crushed cinnamon pretzels. “Everything is handmade here in the shop, from the pops to the shakes,” says Christopher Aldama, who manages the bustling DOCO location. The cookies-and-cream gelato and strawberry pineapple sorbet are crowd favorites. 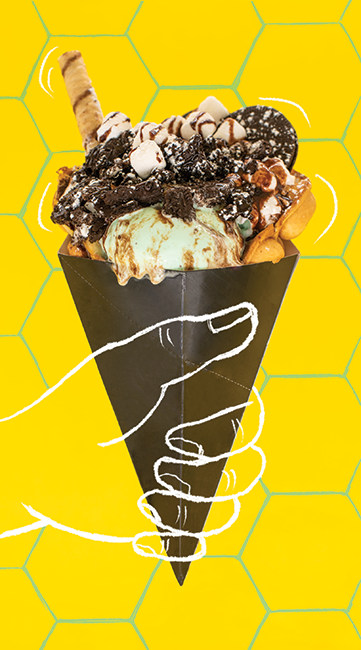 Owner Wahid Khalil takes bubble waffles (the pillowy, honeycomb-shaped street food that originated in Hong Kong), folds them into cones and loads them with ice cream and a gluttonous assortment of toppings, from strawberries to cinnamon toast crunch cereal. The best-seller at this popular food truck (it is frequently parked at the Folsom Outlets) is The Street Cone, which includes your choice of ice cream along with whole and crushed Oreos, marshmallows, chocolate syrup, powdered sugar, whipped cream and a Hazelnut wafer cookie.

Why should ice cream shops have all the fun? Here are three don’t-miss frozen desserts from restaurants better known for their savory side. 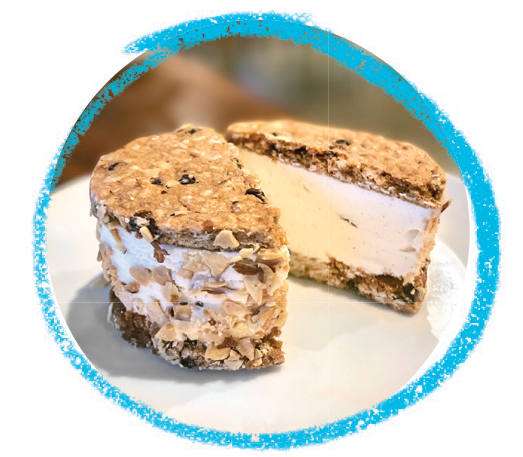 Two flawlessly crisp oatmeal currant cookies hugging a thick puck of Vic’s vanilla bean ice cream that’s been rolled in toasted almonds is perfection in the palm of your hand. 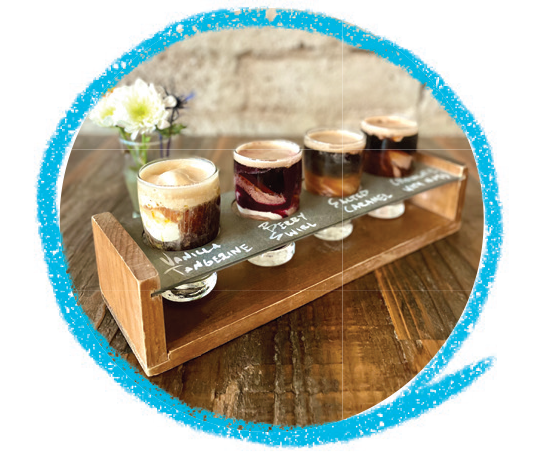 Straus Family Creamery vanilla soft serve meets craft beer in this luscious pairing that will make you forget all about root beer. Also served in a flight with chocolate, berry and caramel versions. 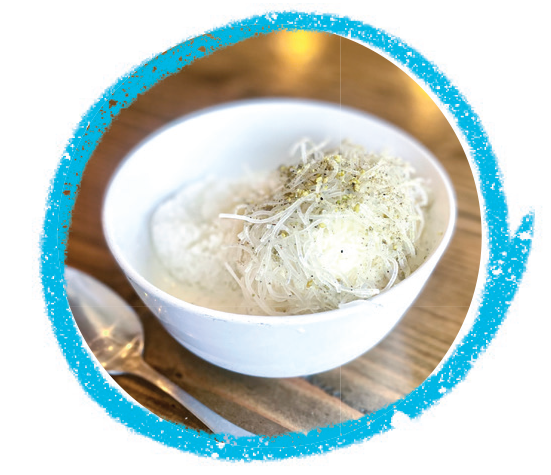 For those avoiding cow’s milk or gluten in their diets, a traditional ice cream parlor can be a lonely place. But all is not lost. More and more shops feature dairy-and wheat-free desserts as chefs perfect the process of making ice cream, gelato and other frozen treats with alternative ingredients. 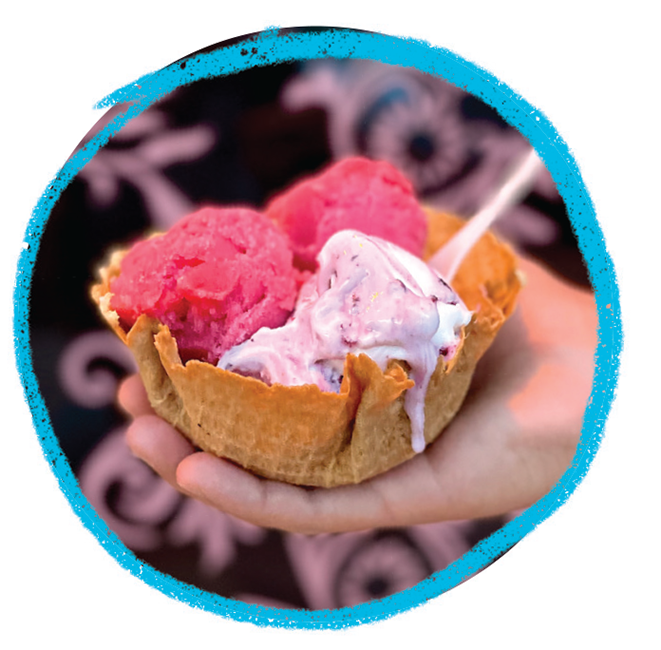 Gluten-free pioneers Olga and Danny Turner produce surprisingly rich vegan ice creams from a coconut base. The sorbets here are the tastebud equivalent of the Delta breeze: refreshing and always welcome at the end of a hot day. 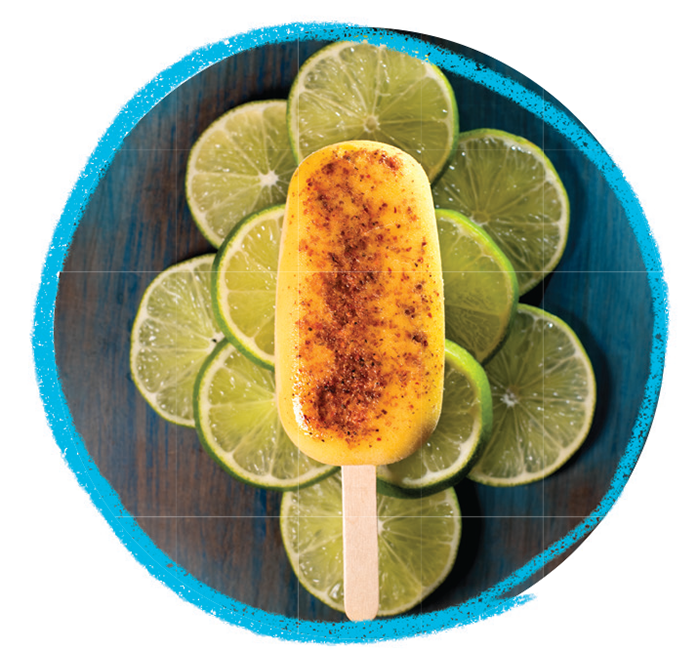 In Some States, Voters Will Get to Decide the Future of Abortion Rights