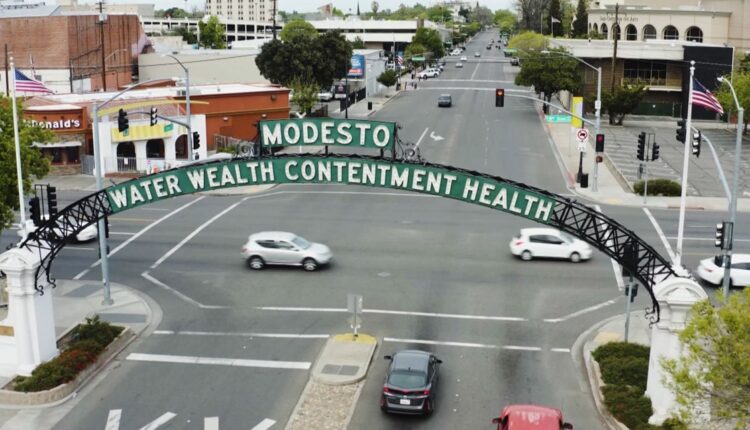 The one-cent tax would go towards general city services from funding first responders to maintaining infrastructure and investing in parks.

MODESTO, Calif. — Voters in the city of Modesto will decide on a proposal to increase the city’s sales tax during the November General Election following an unanimous vote by the City Council Tuesday.

The proposal, made by Modesto City Manager Joe Lopez and advanced to city voters through a vote by the city council, calls for a one-cent increase to the city’s 7.875% sales and use tax.

Of the current 7.875% sales tax, the city of Modesto only sees one percent, the rest goes to the state.

“I believe our city has reached an inflection point,” Lopez said Tuesday. “We have been gradually and methodically shrinking this organization for 15 years to balance our budgets.”

According to city documents, the money from the sales tax increase would go only to the city of Modesto and be deposited into the city’s general fund which supports most city services from funding first responders to maintaining infrastructure and investing in parks.

“Since the Great Recession, we have cut 27% of our staff including many in our public safety departments, and have greatly reduced our investment in our parks system,” Lopez said. “Going forward, we are projecting an $8-10 million annual deficit that will grow as expenses continue to outpace our revenue.”

According to Lopez, the sales tax increase would supply the city with $39 million annually. In addition to supporting and strengthening existing city departments and services, Lopez says the money will also help address the city issues such as homelessness and increase reserve funding.

“Now is the time for residents of Modesto to decide what quality of life we ​​desire for the future,” Modesto Mayor Sue Zwahlen said. “Safety, whether it’s trees that need care or speeding on our roadways, needs more attention.”

If the proposal is passed in November, a Community Oversight Committee would be formed consisting of Modesto residents and council members to ensure that the funds are spent properly.

“Impacts of these trends are clear and have created a negative impact on Modesto’s quality of life and economic vitality,” Lopez said. “I believe it’s time to face our fiscal challenges and become the city I know we all want us to be.”