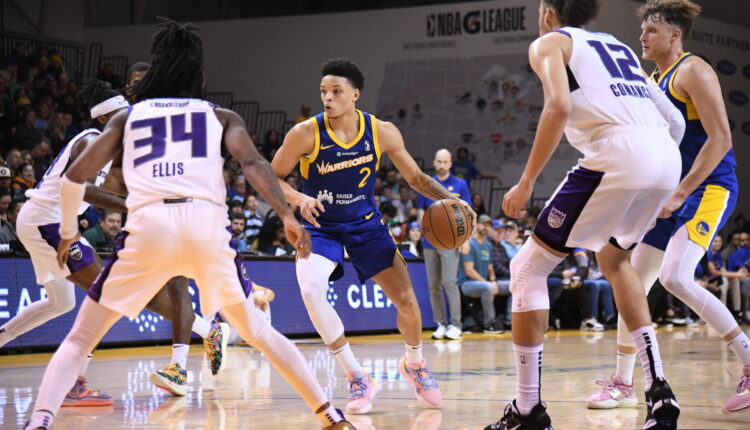 Stockton was led by guard Keon Ellis, who notched 27 points and five rebounds. Forwards Wes Iwundu and Deonte Burton finished with 16 points each, and guard Trey Burke finished with 22 points and four assists off the bench for the Kings.

The Kings held a slight lead throughout the majority of the first quarter, however 12 points from Pemberton kept the game close. With 26 seconds remaining in the first quarter, a three-point shot from Pemberton tied the contest at 32 heading into the second frame. The Sea Dubs controlled the game for most of the second quarter, however the Stockton offense fought back to take a 64-59 lead at the half.

The third quarter saw 12 lead changes, with the Kings heading into the fourth quarter with an 85-84 lead over the Warriors. The contest remained close throughout the fourth quarter, but a three-point shot from Pemberton midway through the quarter gave the Warriors a 101-96 lead. The game was tied at 107 until an and-one from center Jayce Johnson with 4:19 remaining gave Santa Cruz a 110-107 lead. Stockton held a one-point lead with less two minutes remaining in the contest and propelled that lead to seven points with just 11.4 seconds remaining. Despite 20 lead changes in the second half, the Kings ultimately took down the Sea Dubs, 121-112.

Santa Cruz is back in action Friday night for a rematch with the Stockton Kings at 7 pm at Kaiser Permanente Arena. The first 1,000 fans in attendance will receive a Fan Designed T-Shirt presented by SomethingInked. To purchase tickets or for more information on the Santa Cruz Warriors, visit santacruzbasketball.com or call (831) 713-4400.