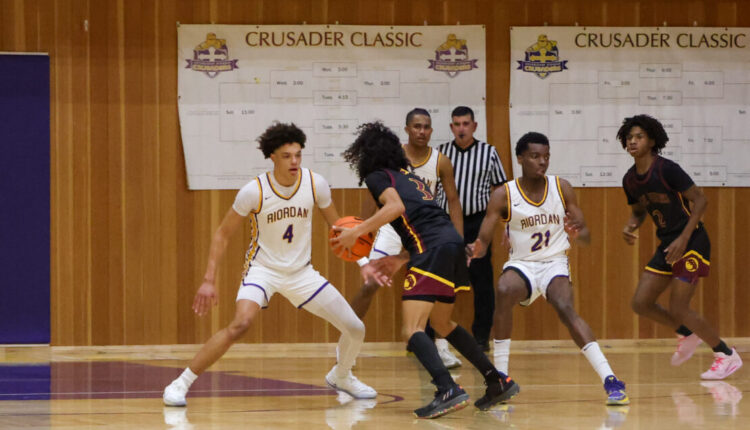 Leon Mills Jr. was always supposed to be in this spot.

A San Francisco native, Mills drove through traffic for the go-ahead layup with three seconds remaining for a 59-57 win over Riordan, the city’s top-ranked team, at the Crusader Forum.

Only he didn’t do it for St. Ignatius, where he spent his freshman year. He made the winning shot for the Edison Vikings, who returned to Stockton with a marquee road victory under their belts.

Mills moved to Stockton after his freshman year to live with his father. He’s gone from a struggling student to one on the Honor Roll, as local TV program 49ers Sac-Hi Sports documented nine months ago.

He’s one of two San Francisco natives to start at guard for Edison, alongside DaeLeon Neal, a junior who had spent his first two years of high school at Wallenberg.

“I had to come back and get the dub in front of my home city,” Mills said.

Hampered by a lack of depth and overwhelmed by the Vikings in the post, Riordan (6-2) went scoreless from the field in the final three minutes. Junior Adams tied the game at 57 on a tip-in with 57.2 seconds left, and after the Crusaders failed to convert a puback, Edison (3-2) held the ball for the final shot.

Head coach Diondre Hawthorne called timeout with 13.7 seconds remaining, and Mills sliced ​​hos way through three defenders to score the winning layup. The referees examined the clock and took the timer from 1.9 back up three, but King-Njhsanni Wilhite’s half-court heave hit the rim and bounced away.

Wilhite scored 16 on the night, with 14 coming in the first half. He and Mills both spent their freshman year at SI; Wilhite started on the varsity team, while Mills led the JV squad.

“We had to get Leon a game in front of his home crowd,” Hawthorne said. “Everybody can’t make it all the way out to Stockton.”

Between parents, the JV team and the extended families that showed up to support both Mills and Neal, Edison brought a larger crowd to the Crusader Forum than some of Riordan’s West Catholic Athletic League (WCAL) rivals do.

Mills had no shortage of friends and family to take photos with the following the game, including a few of his childhood buddies that currently attend Riordan.

The Crusaders used an 18-6 run to take a 12-point lead in the second quarter and went into the half up 37-28 behind the hot shooting of Congolese forward Nathan Tshamala, who scored 12 of his 13 points in the quarter. Putbacks by Andrew Hilman and Jasir Rencher gave Riordan a 13-point advantage early in the third, but Edison controlled the remainder of the game. Jehahn Williams scored eight of his 15 points in the quarter to bring the Vikings even at 43, and Neal’s 3-pointer to close the quarter gave Edison the lead. Achilles Woodson appeared to be Riordan’s saving grace in the fourth quarter when he scored seven of his eight points. He hit a three to give the hosts a 56-54 lead with 3:08 to go, but they never scored again.

Mills was a perfect 6-of-6 at the line in the final quarter and scored a game-high 18 points. His teammates made just four of 15 foul shots, and Arthur Grady Jr. split a pair with 2:04 left to cut the lead to one.

While Grady went just 1-for-7 at the line, he combined with Adams and Cruz Burrise to give the Crusaders nightmares in the paint. With two of the three on the floor at any given time for most of the night, Riordan struggled to score in the paint. The trio combined for nine blocks, with Adams recording five. Riordan still held a 49-36 rebounding advantage, but those extra rebounds were largely a product of recovering shots that the Vikings had blocked.

Most importantly, Riordan couldn’t answer Edison’s interior depth. Christian Wise picked up two fouls in the first four minutes and two more in the first four minutes of the third quarter. He fouled out with 2:04 remaining, having accumulated a game-high 13 rebounds but scoring just three points. Riordan used just nine players, and one of those, Zeke Natorilla, only checked in for the final defensive possession of the first half. Backup center Lolo Ta’aga relieved Wise in the second half after fouls mounted up. Riordan is still without freshman Alexandre Kuminga and awaits junior transfer Kaia Berridge, who will gain eligibility at the start of January.

Williams finished a rebound shy of a double-double for the Vikings, while Neal scored 10. Tre Conner hit a pair of threes in the second quarter, the latter of which sent the Vikings into the half down single digits, and while Burrise scored just Two points, he gobbled up 11 rebounds.

Rencher scored 13 for the Crusaders. Riordan returns to action on Dec. 29 at Menlo-Atherton (6-0).