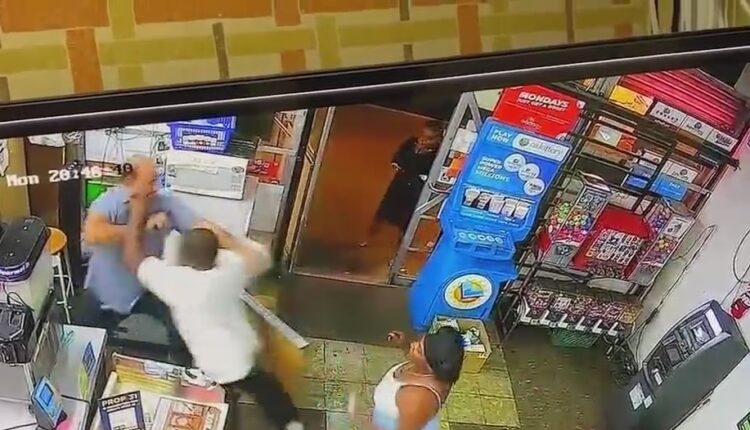 STOCKTON, Calif. (KTXL) — What started off as just another sale escalated to gunshots Monday night at a Stockton liquor store on Jamestown Street.

The store owner’s son told FOX40 the disturbance started over a pack of cigarettes.

Video shows a woman paying for her things. She walks out but forgets her cigarettes. The customer returns to the store and asks about the missing item.

The owner’s son said they checked security cameras and noticed a different woman took the pack of cigarettes that were left behind. The owner’s son gave the customer another pack and asked her to leave.

The customer left but not before throwing a vase. Soon after, a man in white entered the store and an altercation began.

“Two suspects got into a fight with two store employees, and as one of the suspects was leaving the business, he pulled out a handgun and fired several rounds toward the store employees. Fortunately, they weren’t hit,” Silva said.

The window where multiple shots were fired is now boarded up. Stockton police could not confirm how many rounds were fired, but the pictures the owner took show at least two struck the window and another hit the door.

Police said the man and woman are wanted for assault with a deadly weapon.

“Just the action of the suspects last night, very brazen, and we’re fortunate that no one got hurt,” Silva said.

Life sentence looming for burglary, chase suspect who fell from Save Mart ceiling in Fresno