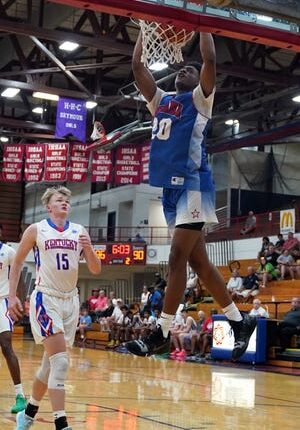 The Ryan Owens Allstate Sneakers for Santa Shootout is set for Saturday with seven high school boys basketball games at Brownsburg. A look at the matchups and more details:

North Central vs Bloomfield, 10 am: This is an interesting matchup between big school and small school, but Class A top-ranked Bloomfield (2-0) is a program accustomed to knocking off larger programs. The Cardinals are led by 6-7 senior Peter Combs, senior guard Brett Sherrard, freshman Blake Neill and senior Justin Beard. North Central (1-1) is led by 6-6 senior Joey Brown and 5-9 junior Mason Lewis. The Panthers host Tech on Friday night, while Bloomfield hosts Shakamak.

Indiana Basketball Hall of Fame:Star-filled group to be inducted in 2023 men’s class

Brownsburg vs. Heritage Hills, 4:45 pm: This is a matchup between one of the top juniors in the state in 6-6 Purdue recruit Kanon Catchings (20.5 ppg, 8.0 rebounds) of Brownsburg and 6-8 Heritage Hills sophomore Trent Sisley, who had 28 points and six assists in his season opener. He has offers from Indiana, Purdue, Iowa, Michigan State and Ohio State. Brownsburg (2-0), ranked fifth in 4A, is also led by senior Elhadj Diallo (19.5 ppg, 9.0 rebounds) and junior Grant Porath (11.5 ppg). The Bulldogs host Franklin Central Friday.

Ben Davis vs. Kokomo, 6:30 p.m.: Two of the top teams in Class 4A meet in this one. Ben Davis, ranked second, is 2-0 after wins over Fishers and Zionsville. Zane Doughty, 6-9 senior and Valparaiso recruit, averaged 19.5 points and 9.0 rebounds in the first two games for the Giants. Others to watch include seniors Sheridan Sharp and Clay Butler, junior KJ Windham and sophomore Mark Zackery. Kokomo, who played in a semistate last year, is led by 6-9 junior and top-10 national prospect Flory Bidunga, who had 16 points and 15 rebounds in a season-opening loss to Westfield. Others to watch include seniors Shayne Spear, Zavion Bellamy and Patrick Hardimon and sophomore Zion Bellamy. Kokomo is at Peru Friday, while Ben Davis hosts Pike.