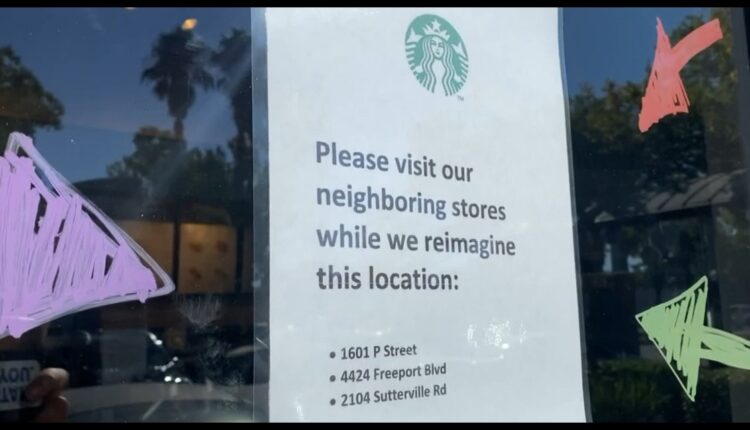 The surrounding area on Broadway is facing several challenges, leaving neighbors fearful it will only get worse.

SACRAMENTO, Calif. — With just one days notice, the Starbucks on Broadway closed Thursday due to safety concerns.

The surrounding area is facing several challenges, leaving neighbors fearful it will only get worse.

“We know that people say ‘there’s a Starbucks on every corner,’ but this truly community coffee shops and it’s gone now,” said Kristina Rogers, Vice President of the Land Park Community Association.

It’s more than just losing a place to grab your daily cup o’Joe. Rogers says the sudden closure of Starbucks signals a growing problem along Broadway and 15th street.

Just weeks before, neighboring Jamba also shut its doors and last week a shooting victim was found across the street at the Tower Café.

Walgreens remains the only store open in the plaza, but Rogers says she doesn’t fill prescriptions there anymore.

Rogers says her group is pushing city and state leaders to do more to address illicit drug use and dealings occurring in the area. On top of unhoused individuals loitering and camping near businesses.

Valenzuela, who represents the area, says she’s too frustrated by the deteriorating environment at the intersection but says solutions can only be reached with the partnership of the county and Caltrans, which has jurisdiction under the WX Freeway a block away.

“This is a situation where the city is cleaning up the mess of other jurisdictions,” said Valenzuela.

She says encampments were pushed closer to Broadway businesses after the California Highway Patrol, with Caltrans, cleared encampments under the freeway in late July without notifying the city.

ABC10 reached out to Caltrans for comment and have not received a response.

The County of Sacramento says it is investing $181 million annually on current and new programs to address homelessness, behavioral health and substance abuse crises.

Valenzuela says substance abuse programs are waitlisted and the county and city must take more aggressive action to scale up services.

“What I really want to say to people who are frustrated about what’s happening on this intersection is I really hope they’ll also call county supervisors,” said Valenzuela.

A revitalization effort is ongoing in the Broadway corridor.

“Starbucks and Jamba Juice leaving is just another example of what is happening all over the city,” said Joan Borucki, the executive director of the Broadway Partnership. “This is why the city’s and county’s recent actions to enforce sidewalk camping limits and passage of Measure O is important to business owners, their employees and customers.”

Measure O will appear on the November ballot which would allow city officials to clear encampments of four or more people, regardless of if there is a shelter for them to go. Opponents say it is cruel and unconstitutional.

Forreston rolls in Stockton, Cardinals a threat in NUIC