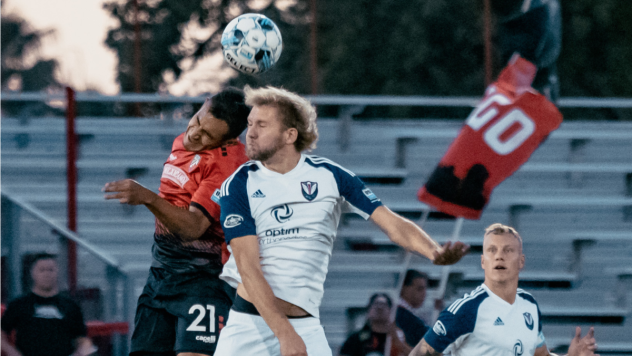 STATESBORO, Ga. – After three consecutive defeats, South Georgia Tormenta FC reintroduced itself to the win column following tonight’s 0-2 win on the road against Central Valley Fuego FC. In Kazaiah Sterling’s first start of the month, the London native found his seventh and eighth goal of the season to hand Fresno its second consecutive defeat to South Georgia at Fresno State Soccer Stadium. With this win, the Statesboro side gets its first win of the month and clinches the series against Fuego FC.

South Georgia found an early goal in the first half after a superb run from the midfield by Tobias Otieno. Otieno beat several Fuego FC players through speed and put an immaculate pass to Sterling, who tapped the ball in, finessing the goalkeeper, getting his seventh goal of the season in the 26th minute.

Notably, TJ Bush got his second consecutive start of the year and obtained his second clean sheet of the season. With three crucial saves, Bush helped maintain South Georgia in the lead as the Fuego FC offensive unit created various opportunities throughout the first half.

Despite being outshot by the home side, South Georgia proved to be clinical, finding the back of the net twice and creating opportunities as an offensive unit. Fuego FC found no reaction tonight and was defeated for the second time this season at home by Tormenta FC.

Tonight’s Player of the Match, presented by Galactic Comics and Games, is Kazaiah Sterling. As Sterling continues to adapt to the style of Soccer Ian Cameron desires to play, South Georgia’s number nine continues to improve and adapt to any scenario. With two goals tonight, Sterling was assertive, creating pressure for the home team offensively and defensively.

South Georgia Tormenta FC is a professional soccer franchise in Statesboro, Georgia that was founded in 2015. The club established itself as one of the premier USL League Two teams across the United States before joining USL League One as the founding member of the league. The club is constructing a new state-of-the-art 5,000-seat soccer-specific stadium in Statesboro. Planned to be built next to The Clubhouse on Old Register Road, the new venue will provide an exciting and authentic professional soccer experience for fans and players alike.

Images from this story

• Discuss this story on the United Soccer League One message board…

Butte College football improves to 3-1 with big win over…