Stockton community gets ready for basketball season with student-friendly event 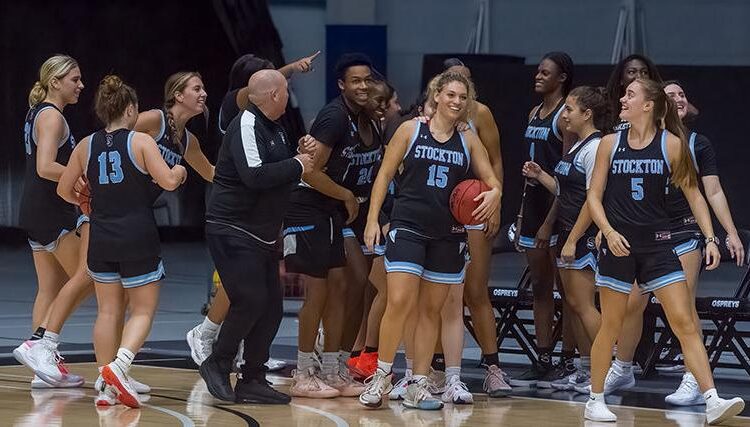 GALLOWAY TOWNSHIP — Reigning New Jersey Athletic Conference Player of the Year DJ Campbell is excited about the Stockton University basketball seasons, and so is the rest of the school.

Stockton held an Osprey Madness on Thursday night in the university’s gymnasium to get the student body ready and engaged with the women’s and men’s teams.

“This is built for the Stockton community,” said Campbell, a 2019 Vineland High School graduate preparing for his senior season. “I’ve been dreaming of stuff like this. You don’t have this stuff at D-III. You normally see stuff like this in DI. So I’m happy we have this with the school showing support.

“This is big for us to get the crowds familiar with the team.”

There were 3-point contests with the players and other students and a dunk contest featuring some players. Students signed up at the door for their contest, but the players were in teams of two (one from the men’s and women’s teams) for theirs.

Ky Flanders (Wildwood) and Aiya Underwood were the winning team.

“I think this is very exciting,” said Flanders, who was the NJAC Defensive Player of the Year last season. “Just to get something like this before the year starts. It’s like a starter for everybody. Everyone will get a feel of what to expect this year. Some of the new players we have. I think some of these new guys will really make a difference in our team.

“An event like this is very good for the school and both teams.”

There was food, t-shirts and other giveaways. Students who won the 3-point contest received a $50 gift card. Some 200 or more students came out, including junior Hayden Smallwood, an Ocean City High School graduate who competes on the men’s lacrosse team.

“I think it’s cool they are displaying the schools in this manner and kind of letting the student population show what they have before the season starts,” he said. “I’m super excited to watch their games and see how they do.”

Before the event started, both the men’s and women’s teams warmed up and were on full display for early-arriving fans. There were many new faces among the players, including Wildwood graduate Imene Fathi, a freshman. She is one of the nine incoming players on the women’s side. The team also will feature freshman Brianna Robinson (Middle Township).

Fathi was a 1,000-point scorer for the Warriors.

“It’s amazing,” Fathi said of the event. “I absolutely love it here. You can tell the community is really close and that everyone really looks out for each other. I am really happy I chose Stockton, and I am excited for this season. This event just brings the whole community together to see what we are about.”

“I think we can prove something this year,” added Fathi, who said that from the moment she visited the school, “I knew that I was meant to go to Stockton. This is just really cool and a fun event.”

“It takes a few games to get the students involved and interested and come to the games,” men’s coach Scott Bittner said. “This is something to kick it off.”

The women open their season Nov. 9 against Alvernia in Reading, Pennsylvania. Last season, the Ospreys finished 11-15 (8-10 NJAC) and advanced to the NJAC quarterfinals.

Coach Devin Jefferson and Bittner were excited to showcase their teams for their fans. The teams are close and sometimes travel together. That chemistry was seen Thursday.

Jefferson said getting the campus community more involved with the two programs is very important.

“It’s a great opportunity to bring some energy,” Jefferson said. “I want (the students) to see we are going to be fun to watch. … I think it is cool. The campus community deserves it.”