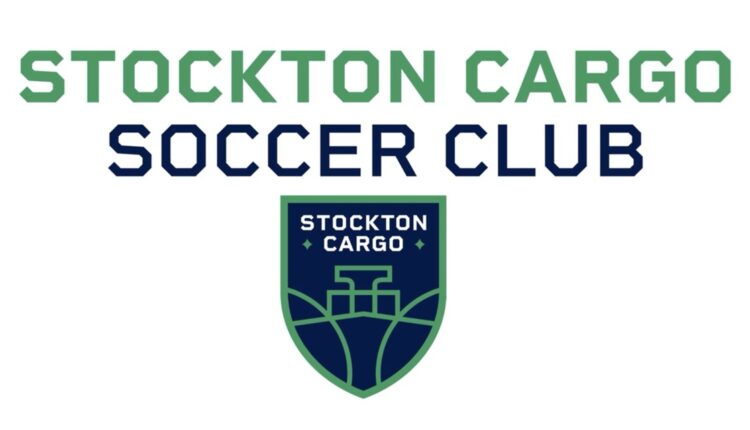 The USL-W team is slated to take the pitch for its inaugural season in Stockton in spring 2023.

STOCKTON, Calif. — With less than a year to go until Stockton’s new USL-W franchise begins playing at the San Joaquin Delta College, team officials have unveiled the soccer club’s official logo and name.

The women’s soccer team, which will join the Ports and Kings becoming the city’s third active pre-professional sports franchise, will be called the Stockton Cargo Soccer Club (SC).

The team’s colors will be “Sporting Green and Stockton Blue.”

Team officials say the name pays homage to the Port of Stockton and the colors represent the city’s rich Portuguese heritage and connection to the Pacific Ocean via the port.

The soccer club’s logo features a cargo ship in between pitch markings.

The announcement and logo reveal were made during a Thursday evening event at a pizza restaurant.

In late April, the United Soccer League (USL) selected Stockton for its next USL-W league franchise, only the second on the West Coast and the first in California.

The United Soccer League, one sanctioning level below Major League Soccer, launched the women’s league in 2022 with 44 teams in the Midwest, South and on the East Coast.

“I’m beyond ecstatic to have Stockton plans the flag for the USL-W League in California,” Stockton Cargo SC President Lee Neves said in a statement. “The city of Stockton can count on this club to represent them with class on the field and bring our fair share of championships back to the heart of California.”

While still searching for a permanent home facility, the Stockton Cargo SC is expected to begin playing out of San Joaquin Delta College’s soccer stadium starting in spring 2023.

The last time soccer was played on the professional level in Stockton was when Stockton’s California Cougars joined the Professional Arena Soccer League in 2004 for a six-season stint before being resolved in 2011.

Sacramento Fire wants you to know about apartment fire safety