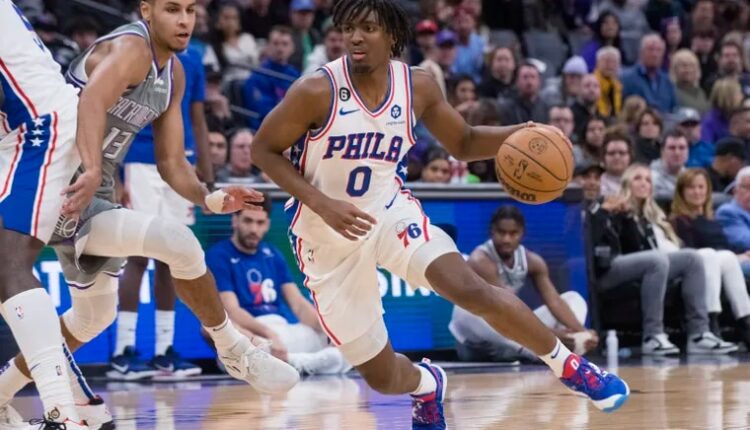 SACRAMENTO, Calif. — The 76ers are resilient.

These three things stood out during Saturday’s 129-127 come-from-behind victory over the Sacramento Kings at Golden 1 Center.

They were without their perennial All-NBA players — Joel Embiid (left foot injury recovery) and James Harden (right foot tendon management) — against one of the league’s hottest and highest-scoring teams. Without the duo, the Sixers found themselves down 21 points in the second quarter to a team riding a six game winning steak and leads the league in scoring (119.8 points per game).

However, they refused to lose.

The Sixers battled back from their huge deficit to take their first lead (95-94) with 2 minutes, 59 seconds left in the third quarter. They built an 11-point lead with 10:29 remaining. However, the Kings (26-19) pulled within one point twice before the Sixers escaped with a two-point victory.

“We just stayed together,” said Daniel House Jr., who had six points. “We didn’t get our heads low. And we just played every possession like it was the last.”

The Sixers’ comeback was fueled by Maxey. The third-year guard scored 15 of his game-high 32 points in the third quarter.

He attacked the Kings’ defense from the start of the second half. He scored on jumpers, layups, and three-pointers. Maxey made 6 of 10 shots, including going 2-of-4 from beyond the three-point line.

The standout was visibly exhausted when he was subbed out with 2:16 left in the quarter. But it had nothing to do with its conditioning. That’s just how much energy he exerted to make sure the Sixers got back into the game.

At one point, he went over the Sixers bench to drink from a bottle of water while one of the Kings shot free throws at the other end of the court. During another break in the action, he walked over to near the scorer’s table, where coach Doc Rivers designed a play on the clipboard for him to run.

He definitely did that for the most part in the third quarter.

Tucker has gotten accustomed to starting games, but not finishing them.

However, he showed a lot of leadership. At one point, he huddled up his teammates to make sure they maintained their composure during a tough stretch.

“It’s just reminders,” Tucker said of the huddle. “You got so much going on. They got great fans. A lot going on. People looking around everywhere, everybody yelling. I’m trying to bring everybody back together.”

He told his teammates to box out and reminded them what they normally do in clutch situations. His words of wisdom helped them out.

So did his physicality. While he didn’t grab a lot of rebound, he boxed out opposing players so teammates could grab them.

Best performance: This goes to Maxey.

Worst performance: I had to give this to Davion Mitchell. The Kings reserve guard missed three of his four shots and more fouls (two) than assists (one).

Best defensive performance: This was a tough one because De’Anthony Melton had team-high three steals to go with one block. But De’Aaron Fox was able to score at will when Melton guarded him. So Matisse Thybulle gets this on a night he didn’t record a steal or block a shot. However, he did a solid job of defending Fox, especially in the third quarter. The Kings standout guard didn’t score while Thybulle was on the floor in the third. But his first bucket in the quarter came as soon as Thybulle was subbed out of the game.

Worst statistic: This goes to the Kings finishing with just six second-chance points.

Best statistic: This goes the Sixers outrebounding the Kings, 46-29. Their biggest rebound came on the last play of the game. Paul Reed, while on his back, grabbed Domantas Sobanis’ missed tip-in with 1.0 second left before the clock expired.

Best of the Best: This victory gives the Sixers sole possession of second place in the Eastern Conference. They were tied with the Milwaukee Bucks, who dropped to third place after losing Saturday to the Cleveland Cavaliers.

One person shot, another assaulted in attempted robbery at a Fresno County massage spa