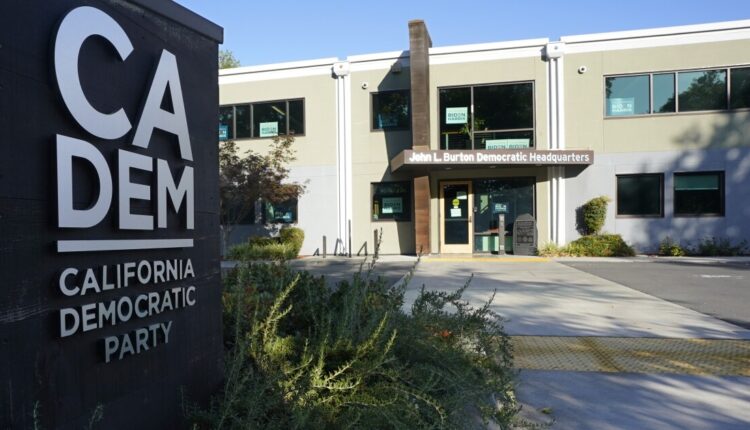 Two Northern California militia members are in federal custody after being charged with plotting to blow up the state Democratic headquarters in Sacramento.

This month, more information was revealed about the pair, but first let’s review the case.

In a federal indictment, Ian Benjamin Rogers, 45, of Napa and Jarrod Copeland, 37, of Vallejo are accused of plotting an attack in order to start a “movement” of violence. Federal prosecutors allege that Rogers and Copeland were upset about the outcome of the November 2020 presidential election.

Some evidence released by the FBI came in the form of texts. In one message, Rogers allegedly stated, “Let’s see what happens then we act” and later added, “I’m thinking sac office first target” and “Then maybe bird and face offices.”

FBI Special Agent Stephanie Minor, in an affidavit attached to the charges, said she interpreted “sac” as meaning the offices of California Gov. Gavin Newsom in Sacramento, and “bird” and “face” meaning Twitter and Facebook “because both social media platforms had locked Trump’s accounts to prevent him from sending messages on those platforms.”

On Jan. 11, 2021, Rogers allegedly messaged Copeland, “I want to blow up a democrat building bad.” Copeland replied, “I agree” and “Plan attack,” according to the indictment. Rogers ended the exchange saying, “Let’s see what happens after the 20th we go to war.” President Biden was inaugurated on Jan. 20, 2021.

On Friday, Rogers pleaded guilty, under a plea agreement, to conspiring to destroy a building by fire or explosives, possessing an explosive device and possessing a machine gun. Copeland previously pleaded guilty to the conspiracy charge and an additional count of destruction of records.

A new report on the plot

To find out more about the pair, KQED reporters Alexandra Hall and Julie Small reviewed hundreds of documents and conducted interviews with people who knew the men.

Those who new Rogers said he had expressed hostility toward people of other races.

A Napa resident described one of Rogers’ rants to KQED: “He was just stomping around, you know, ‘these motherf———’— you know, dropping N-bombs — ‘with their stupid’ — just like, like flexing, just flipping out. Other times you just hear him screaming about whatever — the Jews or, you know, Nancy Pelosi.” People said Rogers talked about naming his German shepherd “Fritz” after Hitler’s personal dog handler, Fritz Tornow.

Justin Laquindanum, who worked at a Pep Boys with Copeland, told KQED he would frequently bring up politics while the two were working: “He would ask me, ‘Hey, what do you think about this Black Lives Matter s—-?’” Laquindanum also said Copeland wanted to be a cop, and appeared to be upset about being rejected by so many police departments in the state.

Copeland’s cousin told KQED that the allegations didn’t sound like the person he knew.

“As far as I can remember, he’s never even had a speeding ticket,” Novice Doublin said. “I don’t think Jarrod realized the severity behind the conversation.”

Note: Some of the sites we link to may limit the number of stories you can access without subscribing.

The action in California’s June 7 primary election is in races far down the ballot. The lack of suspense in California’s marquee races ahead of the June 7 primary threatens to suppress voter turnout. Having said that, there are some aspects of the election that have received attention: the contentious race for mayor of Los Angeles, and the emergence of candidates shunning affiliation with any political party. Los Angeles Times

Kevin de León’s bid for mayor may be lagging. But he’s resurrected himself before. De León held a lot of power as leader of the state Senate. However, his political star was camouflaged by his unsuccessful attempt to remove Dianne Feinstein from her US Senate seat in 2018, an act that divided the state’s Democrats. But De León, 55, regrouped after the debacle — a skill he will need as he trails far behind Rep. Karen Bass and billionaire Rick Caruso in most polls. But there’s a lot more to know about him outside of his political career. Los Angeles Times 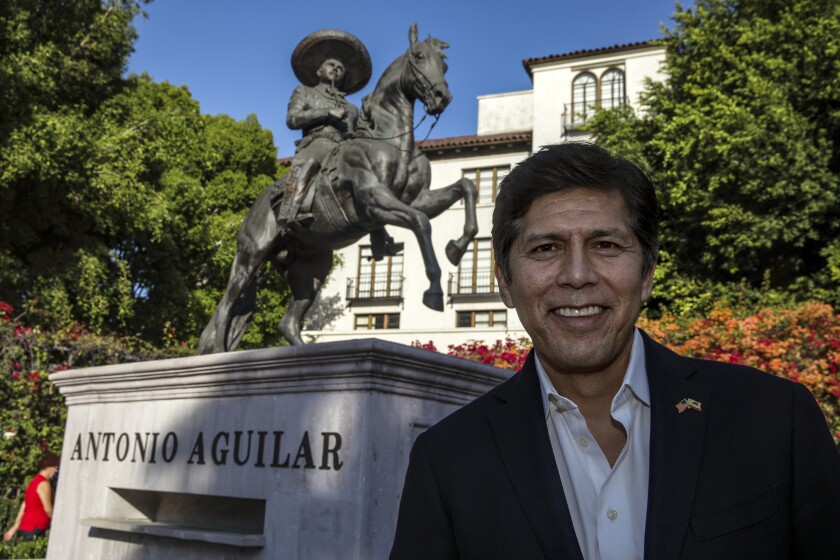 Results of a Compton City Council race decided by one vote have been overturned following an election rigging scandal that prompted criminal charges against the winner last year. Los Angeles Times

If you’re a fan of this newsletter, you’ll love our daily podcast “The Times,” hosted every weekday by columnist Gustavo Arellano, along with reporters from across our newsroom. Go beyond the headlines. Download and listen on our App, subscribe on Apple Podcasts and follow on Spotify.

Does California have enough water for lots of new homes? Yes, experts say, despite drought. While state officials are once again pushing for residents to conserve water, many of those same officials are pushing for the construction of millions of new homes to address the housing crisis. How does that make sense? The answer, according to experts, is that there’s plenty of water available for new Californians if the 60-year trend of residents using less continues and accelerates into the future. Los Angeles Times

Column: Trump’s judges are coming for California’s gun laws. Can we stop them? “We may be running out of options to control AR-15s and other high-powered firearms in California, and across the nation, because conservative judges are poised to return to a Wild West era of gun rights. As in, anything goes,” writes columnist Anita Chabria. Los Angeles Times

California cops who racially profile, unlawfully use force or commit other misconduct could soon lose their badges. Here’s how. Last year, the state passed Senate Bill 2, which allows a state agency called the Commission on Peace Officer Standards and Training (POST) to set up a system for decertifying cops. The agency would be able to punish officers who commit serious misconduct so they can no longer be police officers. KQED

Doctor sent to prison in hydroxychloroquine smuggling attempt. dr Jennings Ryan Staley, 47, agreed with a Chinese supplier’s suggestion to mislabel a 26-pound shipment of hydroxychloroquine as “yam extract” to get around customs authorities. Staley was sentenced in San Diego federal court to one month in prison, followed by one year of home confinement, after pleading guilty to a felony related to the shipment. San Diego Union Tribune

HEALTH AND THE ENVIRONMENT

California drought resurrects decades-old plan for controversial Sites Reservoir. The Metropolitan Water District of Southern California and Gov. Gavin Newsom have supported creating a massive reservoir in a valley north of Sacramento. The proposal has been met with opposition from environmentalists who say the reservoir will do little to solve Southern California’s water problem. Los Angeles Times

On a block full of lawns, she ditched grass for a DIY drought-tolerant oasis. Sarah Lariviere was trying to think of creative ways to make a vibrant garden while conserving water. After educating herself about different methods, she and her husband removed about 2,500 square feet of lawn from their Burbank home and embarked on an ambitious landscaping project that was almost entirely paid for by the Metropolitan Water District of Southern California through a turf removal rebate. Los Angeles Times 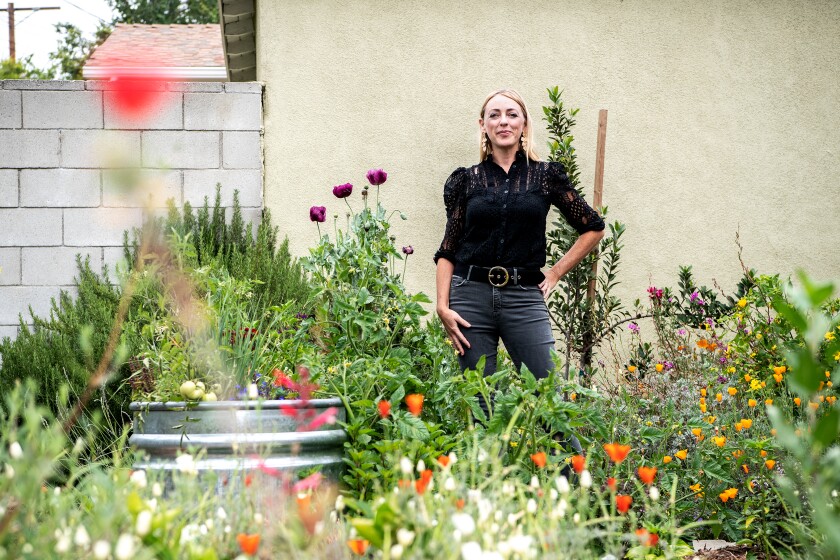 Sarah Lariviere in her Burbank backyard on May 18.

SoCal man, 78, gets high school diploma 60 years later. For six decades, Ted Sams regretted missing his high school graduation. Sams finally received his diploma with the class of 2022 at San Gabriel High School. In 1962, he was suspended just five days before the end of the school year. He missed a final exam and had to make it up over the summer. “When I went back with my grade, they wouldn’t give me my diploma because I owed $4.80 for a book,” Sams told KABC-TV. “And so I just walked away and said forget it.” Associated Press

Fast-food franchises are hiring teens but may be doing so at the expense of their health and safety. Many teens get jobs over the summer working in the food service industry. But many popular food chains “have been cited by the US Department of Labor in recent years for child labor violations that involved operating dangerous machinery.” This includes industrial trash compactors and dough mixers. Some state laws are meant to protect teens from being exploited. For instance, California prevents minors ages 16 and 17 from working between 10 pm and 5 am (12:30 am on nonschool nights). Capital and Main

Get our free daily crossword puzzle, sudoku, word search and arcade games in our new game center at latimes.com/games.

I first set foot in America on May 2, 1945, at West Basin in San Pedro after 38 days crossing the Pacific from Manila by troopship after three years’ brutal internment by the Japanese. We were bused to the Elks Club reception center downtown through flat farm fields and small towns. My father’s company provided a car and driver and we explored LA on empty boulevards. I returned to live permanently in LA in 1957, where now the fields have been replaced by housing tracts and the boulevards by frustrated drivers, but I can’t think of leaving again.

If you have a memory or story about the Golden State, share it with us. (Please keep your story to 100 words.)

Please let us know what we can do to make this newsletter more useful to you. Send comments to [email protected]