Thousands of Ukrainians crossed into California this year. Many of them came to Sacramento. 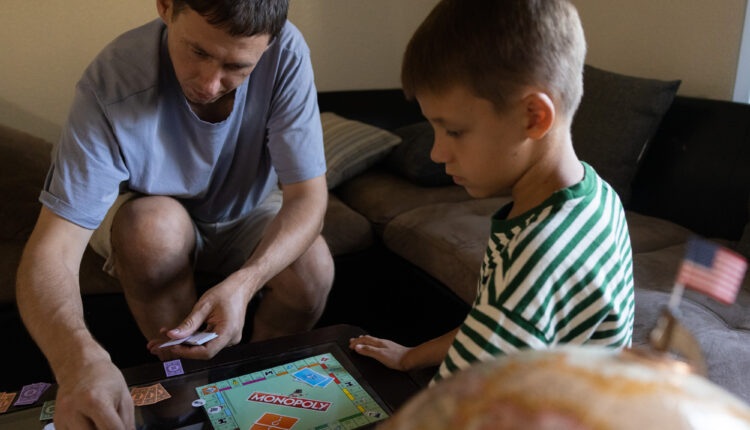 Mykola Chernov had heard rumors for months about a Russian invasion that could encroach on their life in Mykolaiv, Southern Ukraine. But nothing prepared his family for the explosions they heard the morning of February 24, which sent them on a six-week, multi-country journey to find safety.

“[We] had two hours to get everything,” said Chernov, through an interpreter, about the first day of the Russian invasion, when forces bombed a nearby military base two hours northeast of Odessa.

He, his wife, Olena Chernova, and their 8-year-old son fled to various cities in Ukraine, drove through several European countries and flew to Mexico, all without a final destination. It was during a temporary stay in Italy, when a cousin urged the family to seek refuge in the Sacramento area.

“She insisted we come,” Chernova said.

Olena Chernova and her husband Mykola Chernov pose with their son, Tima Chernov. in their Roseville Home on Wednesday, July 27, 2022.Andrew Nixon / CapRadio

Sacramento has seen a surge of new Ukrainian immigrants since the Russian invasion, many of them with a similar story and motivation as Mykola Chernov. Family members, friends, YouTubers and bloggers — all have drawn refugees to the area and have supported them when they arrive.

While an exact count is not known, Vlad Skots of the Ukrainian American House in Rancho Cordova says as many as 10,000 Ukrainians have sought refuge in the Sacramento area in just the past few months.

“They’re staying everywhere, at their friends, families,” Skots said, in addition to donated spaces from Americans sympathetic to their plight.

According to US Customs and Border Protection, more than 22,000 Ukrainian nationals crossed the border from Mexico to California between the end of February and late April.

Skots says many of them came to Sacramento because of its already-existing, large Ukrainian diaspora, many of whom arrived after the fall of the Soviet Union.

The Ukrainian Consul General in San Francisco, Dmytro Kushneruk, says newly displaced Ukrainians are seeking refuge in Sacramento because it already has the biggest Ukrainian community in California, united by a strong network of Slavic Christian groups.

“The churches are very active,” Dmytro Kushneruk said. “They’re helping people a lot. And they’ve done a lot of efforts to find housing [and] get the Medi-Cal.” 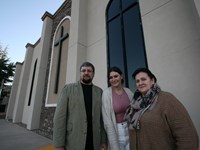 Spring of Life Baptist Church has been holding events for new refugees every Saturday evening at their large church in Orangevale. Hundreds of Ukrainian immigrants come to their weekly gatherings; some sit on outdoor couches and mingle with other refugees, while church staff help others make DMV appointments, find housing or sign up for government benefits.

Viacheslav Kulinkov and his wife, Kateryna Kulinkova, came one recent Saturday evening. Since the most recent Russian invasion, they left their home town of Crimea — annexed by Russia in 2014 — and embarked on an 11 day journey to Sacramento. They didn’t have any friends or family in the area, but they knew they’d find a supportive Slavic community.

Ukrainian refugees who came through Tijuana were given a one-year humanitarian parole, and more than half of the newly arrived immigrants are women and children, because men are required to stay and fight, Kushneruk said.

At the end of April, the pathway to immigration changed to President Biden’s Uniting for Ukraine program, and Ukrainians largely stopped coming over the border from Tijuana. Under the administration’s new plan, immigrants must have a sponsor in the US who is willing to support them financially, and they are allowed to stay in the country for up to two years.

According to the US Citizenship and Immigration Services agency, an additional 23,000 Ukrainian nationals have arrived in the US through the Uniting for Ukraine program, and tens of thousands more have applied to come, with Sacramento being a top 10 most requested area for residency.

Looking for jobs, hoping to stay 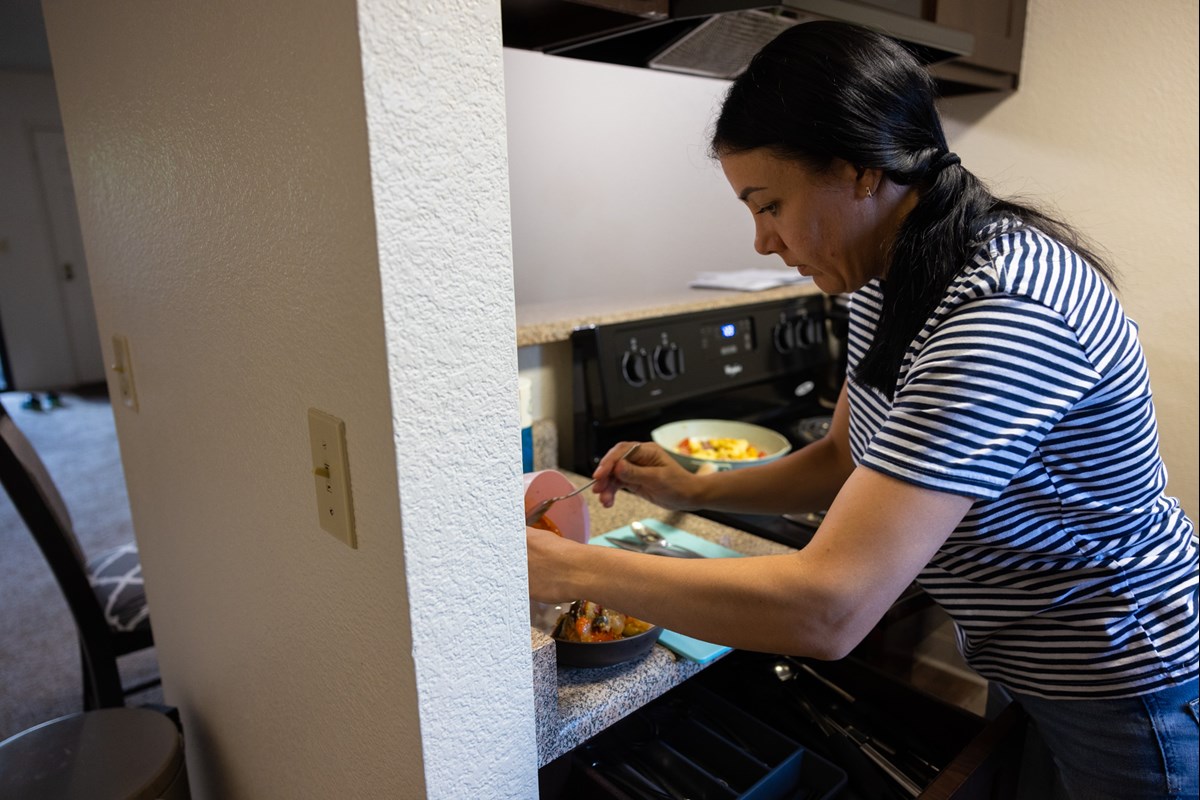 The new Ukrainians are eligible for public assistance and food benefits, but many of them would like to work, according to Kushneruk. They can apply for authorization, but it can take six months.

“People are ready to work like the first days after they come. And we know that a lot of businesses are understaffed in California, and in [the] Sacramento area, too. And so that will really help if people could work. But the system as it is is not allowing for them to get this authorization quickly,” Kushneruk said.

Kulinkov hopes to continue a career in truck-driving when he’s authorized, and his wife says she study to become a nurse.

Skots says the work authorization delays for Ukrainians are unfortunate because many of the immigrants are young, educated and speak English.

“I just don’t understand… just let these people pay for themselves, pay for the taxes. That’s going to be less headache for everybody,” he said.

While Kateryna Kirieieva, 29, and her husband await work status, she is taking English classes at the Russian library in Citrus Heights, which is part of the Highlands Community Charter School.

Kirieieva, a Ukrainian national, came to Sacramento this spring from Poland, where she and her husband were temporarily living in order to seek a better life for her 7-year-old daughter and avoid the Russian invasion.

Kirieieva’s family is living at a friend’s apartment in the Sacramento area, and is receiving financial assistance. Although she was trained in accounting, Kirieieva would like to pursue work in child care or education and her husband may work in car repair or machinery.

Her English teacher at the Russian library, Celena Tasabia, says she’s had 11 new Ukrainian students since the end of February.

One weekday morning at the library, which is located inside a strip mall storefront, Tasabia teaches them the significance of words included in the US Bill of Rights, and about the grammatical rules of past tenses.

Tasabia says a lot of the newer Ukrainian immigrants are beginner English speakers, but she can pick up on non-verbal hints that they’re “going through some stuff.”

“They are just in a rush to adapt,” Tasabia said. “They don’t know how long they’re going to be here.”

Mykola Chernov, now settled in Roseville, is also eager to adapt to life in the US While the war in Ukraine wears on, “there’s just no point of going back,” he said.

He also came to the Spring of Life Church on a recent Saturday to get help with his work authorization papers. In Southern Ukraine, he had an iPhone repair business. In the US, his family receives $400 a month in state benefits. But he’s looking forward to supporting himself again.

“Once we get a job, stable job, then we can get rid of it because … [we’ll be] able to work and provide for ourselves,” Chernov said.

Many others like Mykola are in limbo in the Sacramento area this summer, looking for work, learning English — and wondering if they will settle in the US permanently when their humanitarian parole is up.