Three takeaways from 2-0 win against Bakersfield 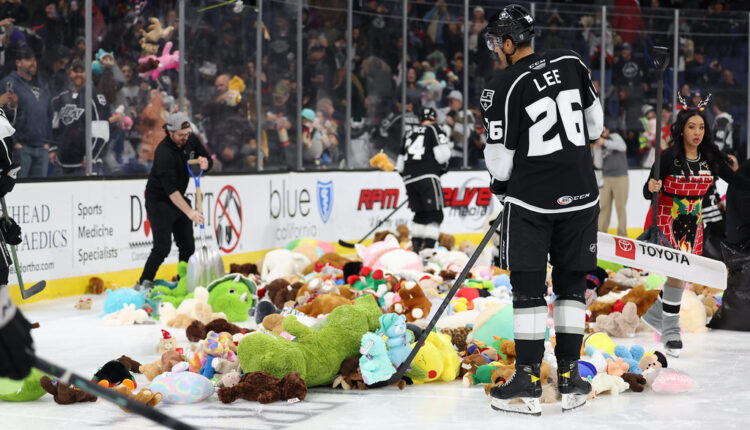 Andre Lee’s game-winner and Cal Petersen’s shutout propel the Ontario Reign to a 2-0 home win against the Bakersfield Condors.

Here are the three takeaways from Saturday’s 2-0 victory

It was the night of the annual teddy bear toss, and nobody scored a goal through 40 minutes. The Reign and Condors were engaged in another tight-checking game. For those who don’t know, the annual teddy bear toss happens every year for the Ontario Reign and other teams around the AHL. The way it works is when the home team scores their first goal, all the fans in attendance who brought teddy bears to the game throw them onto the ice. Those teddy bears/stuffed animals go to charity for a good cause.

At the 2:27 mark of the third period, Andre Lee beat Condors netminder Olivier Rodrigue for his second goal in three games, unleashing the teddy bears/stuffed animals on the ice. The goal by Lee would be the game-winner as Samuel Fagemo added an empty-net goal as insurance. Lee has played well the last couple of weeks and it’s good to see him get rewarded.

Cal Petersen saw 19 shots and turned aside all 19 of them. Not many were high-danger scoring chances but the few that were, Petersen made the saves when needed. The win improved Petersen’s record to 4-1-0 in five games played. Petersen has been tracking the puck well and will need to keep doing so. If Rob Blake isn’t going to trade for a goalie at any point during the season, the Kings will need Petersen to keep playing this way for the Ontario Reign and hope it translates to the NHL if he gets called back up.

The Ontario Reign will hit the road and travel up north to take on the Calgary Wranglers. For those that need a refresher, the Calgary Wranglers relocated from Stockton after the 2021-2022 season concluded. The Stockton Heat and the Ontario Reign had some great battles with seven of the eight games being decided by two goals or less. This week the Reign and Wranglers will meet up for the first time this season. Both teams have won eight of their last ten games with Calgary being only two points ahead of Ontario in the standings. It should be a fun, exciting two games.

UP NEXT: The Reign head to Calgary for a two-game series. Game one is on Tuesday at 6 PM PT and can be seen on AHLTV.