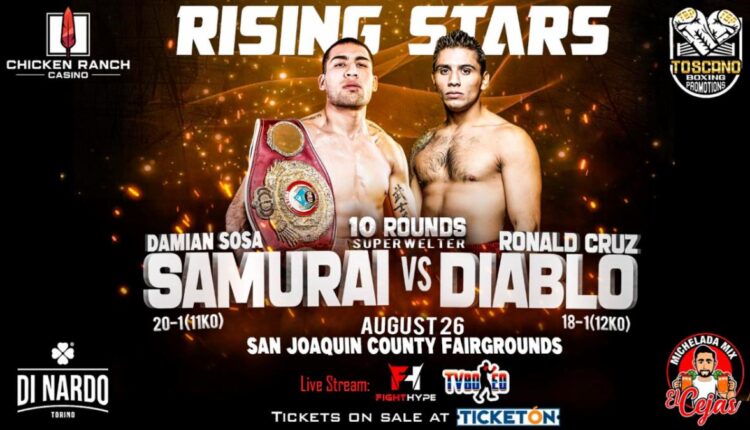 STOCKTON, Calif. (Aug 17, 2022): Top prospects from all over California will be featured on the undercard of Damian Sosa vs Ronald Cruz on Friday, Aug. 26 at San Joaquin County Fairgrounds in Stockton, California. The entire card will be streamed live in English on FightHype and in Spanish via TV Boxeo beginning at 6:30 pm PT/9:30 pm ET.

“Our undercard illustrates our commitment to supporting talent from Stockton and all over California,” said Jorge Toscano, CEO and Founder of Toscano Boxing Promotions. “Giovannie Gonzalez is an exciting Stockton native who will take on Arturo Cortez in a rematch that promises to deliver lots of action.”

“We’ll also have Gabriel Muratalla and Arturo Popoca, fighters from the Inland Empire who are trained by Robert Garcia. The Golden State will shine bright on Aug. 26, and you can watch all of it on Fight Hype or TV Boxeo.”

As announced previously, rising 154-pound Mexican contender Damian “Samurai” Sosa (20-1, 11 KOs) will square off against Ronald “Diablo” Cruz (18-1-1, 12 KOs) in a 10-round main event. In the co-main event, Stockton, Calif.’s Giovannie “King Gio” Gonzalez (14-6-1, 12 KOs) will battle undefeated prospect Arturo “Che Che” Cortez (7-0-2, 6 KOs) of Tijuana, Baja California, Mexico in an eight-round lightweight clash. This bout will be a rematch of their 2020 fight that ended in a majority draw.

Purchase your tickets for all your MMA and Boxing Events by going here.

Victor “El Torito” Torres (8-10-1, 5 KOs) of Modesto, Calif. will fight against Fontana, Calif.’s Israel Luna (2-2, 1 KO) in a four-rounder in the 118-pound division. Irving Xilohua (2-0, 2 KOs) of Stockton, Calif. will return in a super bantamweight fight scheduled for four rounds against Rodolfo Molina, a native of Antioch, Calif. who will be making his pro debut.

Roberto Villa is the CEO, Founder, Executive Writer, Senior Editor of FightBook MMA. Has a passion for Combat Sports and also a podcast host for Sitting Ringside. He’s also a former MMA fighter and kickboxer.