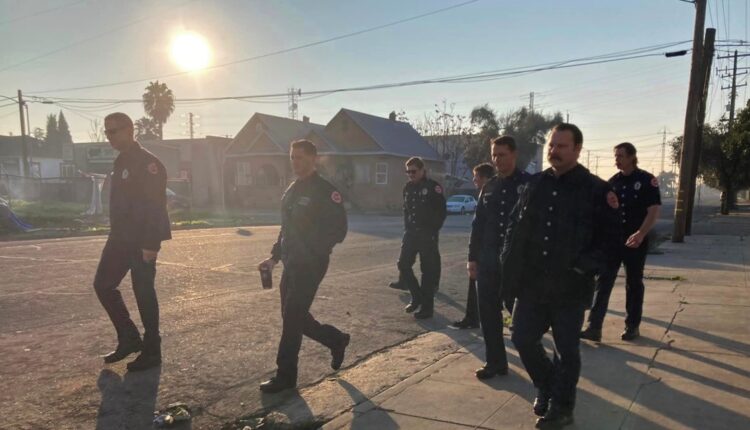 Accused in the shooting was 67-year-old Robert Somerville, who owned the property and business designing and building food trucks.

STOCKTON, Calif. — Each weekday morning, in a brotherhood of support, firefighters from Station 2 in the shadow of Downtown Stockton head to the nearby San Joaquin County Superior Courthouse for the trial of the man accused of killing beloved fire captain Max Fortuna.

The tragic shooting happened last year, Jan. 31, on a dead end street at the corner of Aurora and Washington Streets next to Stockton’s Crosstown Freeway.

Fortuna and his fellow firefighters answered a call around 4:45 am for a dumpster fire.

Firefighter Jacob Yeager took the stand on day three of the trial. Yeager tested before a jury he heard three to four gunshots that morning. Then, he says he heard another single shot about 20 seconds later.

Moments earlier, Yeager detailed how Fortuna had been using an electric saw to cut around a lock securing a roller door to gain access inside a building, then he witnessed Fortuna going into a “slight jog” to the back of an engine.

Meeting Fortuna there, he asked him if he had been struck by gunshots. Fortuna replied “yes” and motioned to his chest.

Yeager tested he and a fellow firefighter then dragged the captain to a safer location several feet away and tried providing first-aid, but Fortuna died.

67-year-old Robert Somerville, who owned the property and business designing and building food trucks, was accused in the shooting.

The Somerville family says had been the victim of attempted break-in’s and believed his property was being burglarized.

“He thought he was protecting himself and he had to fear for his life. Can’t be too sure about the facts because we weren’t there, that he was operating in self-defense,” said brother Greg Somerville on the day Robert Somerville was arraigned on Feb. 2, 2022.

Stockton Police Evidence Technician Amanda Dias also tested Tuesday. She showed the jury photos of the metal roller door at the scene with what she said were four bullet holes.

The prosecution expects the trial to last about two weeks.