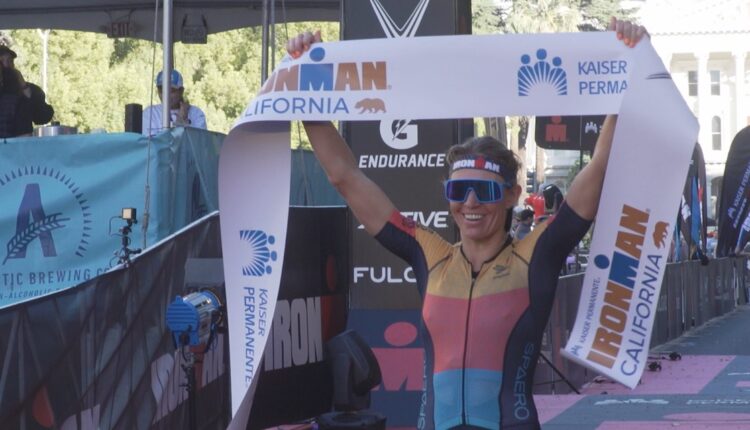 Sacramento pride was also on full display as participants from the Sacramento Triathlon Club (STC) finished the race.

SACRAMENTO, Calif. — Athletes and triathlon enthusiasts descended on Sacramento Sunday for Ironman California. The event debuted after the coronavirus pandemic and weather-related issues canceled the race in past years.

“It’s a real dream to race here and to win is fabulous for me,” said Julien Boulain, the overall winner for the men’s division. He came to Sacramento from Paris, France.

Liis Rametta, who is originally from Estonia, won the title for the women’s division.

“Really happy that I was able to finish this race,” she told ABC10.

Holding the banner meant a bit more for Rametta this year. She came to Sacramento with her family for last year’s event before it was canceled due to stormy weather.

“It’s kind of like finish what you started. I was here last year ready to race, and it didn’t happen,” she said.

This year, other than wind, competitors had better conditions on the course.

Organizers said 2,800 athletes started the race. Crowds of spectators and family members poured into the area to support them.

“A lot of the folks who are participating come in and stay for seven to 10 days, so obviously, that’s great for the restaurants and different businesses in the community,” said Mike Testa, president and CEO of Visit Sacramento.

Testa said Ironman California is estimated to bring in $15 million to the community.

“Hotel rooms, the car rentals, the spends at local restaurants and local businesses, so from an economic standpoint, it’s a huge shot in the arm for our community,” he said.

Sacramento pride was on full display as participants from the Sacramento Triathlon Club (STC) finished the race. Lisa Balzano came out to the finish line to support her brother, an STC member, and his wife.

“He’s such an inspiring person. They both work as physical therapists and really give back to the community so we’re happy to have this at home here today,” Balzano said.

By winning their age group, athletes can earn a spot in the World Championships, which will be held next October in Hawaii.

Drivers in Decline: A Shortage of Volunteers Complicates Access to Care in Rural America